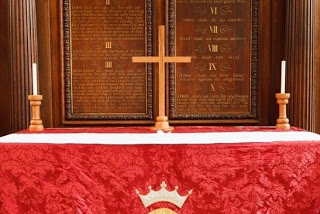 Churches must stop collecting tithes, for they are Old Testament practices specifically prescribed by God to the Israelites, said the Prophet Wonderful Prince.

Last week, the Wonderful Prophet told The Sunday Mail Religion that the death and resurrection of Jesus Christ ended the "old ways," such as tithing.

The verse says, "Bring all the tithe into the storehouse, that there may be food in my house. Test me in this, "says the Lord Almighty, and see if I will not open the floodgates of heaven and pour so much blessing that there will not be enough space to store it ".

However, the Wonderful Prophet said that the verse should be contextualized with Malachi 1: 1, which says: "Prophecy: The word of the Lord to Israel through Malachi."

The preacher – whose church has no name, but is "a gathering of heirs" – said that Jesus did not survive the tithes, but that people willingly supported his ministry.

He referred to Luke 8: 1-3, which says, "After that, Jesus traveled from one city to another proclaiming the good news of the kingdom of God. The Twelve were with him, and also some women who had been healed of evil spirits and diseases: Mary (called Magdalene) from whom seven demons had gone; Joanna the wife of Chuza, the manager of the house of Herod; Susanna; and many others. These women were helping to support them by their own means. "

The Prophet Wonderfrul said, "I have never collected tithes or offerings since 2013. This is the true gospel because Jesus never preached that we paid tithing; this was a Jewish practice. We are not Jews, but we were Gentiles until the death and resurrection of Jesus Christ.

"Even Paul wrote in Ephesians 2 verses 11-16 that those who were not Jews were referred to as Gentile or unclean, but the coming of Jesus Christ changed the game, for all who believe in the Son of God are heirs of the kingdom.

"If we are followers of Christ, then why should we stick to the Old Testament teachings on tithes and offerings? The true gospel is that pastors should not outlive tithing, but the voluntary support of those who want to support the gospel. "

The Wonderful Prophet also stated that water baptism was an Old Testament practice that ended with the coming of Christ, which John the Baptist said was baptized with the Spirit.

He also said that Holy Communion was no longer relevant because the crucifixion of Jesus' body represented bread and wine.

"It is also wrong to say that so-and-so is the founder of a church because Jesus Christ is the one who initiated the Church. When Jesus calls someone to serve, the main focus must be pushing his agenda.

"We should not focus on being presidents or founders of churches; that is where self-glorification emanates. This is how many begin to refer to themselves as spiritual fathers, "said the Wonderful Prophet.

Other preachers disagreed with these views.

Pastor Morgan Moyo of New Gospel Ministries said that there was nothing wrong with tithing, explaining: "There is no difference between the Old and New Testaments. We use the Bible as a whole. Tithes are still relevant, for God's principles still apply to this day. "

Another cleric pointed out that Jesus, in Matthew 5: 17-18, said, "Do not think that I have come to abolish the Law or the Prophets; I did not come to abolish them, but to fulfill them. For I tell you truly, until heaven and earth pass, not a single jot or a stroke of pen, will disappear from the Law until all is fulfilled. "- State media