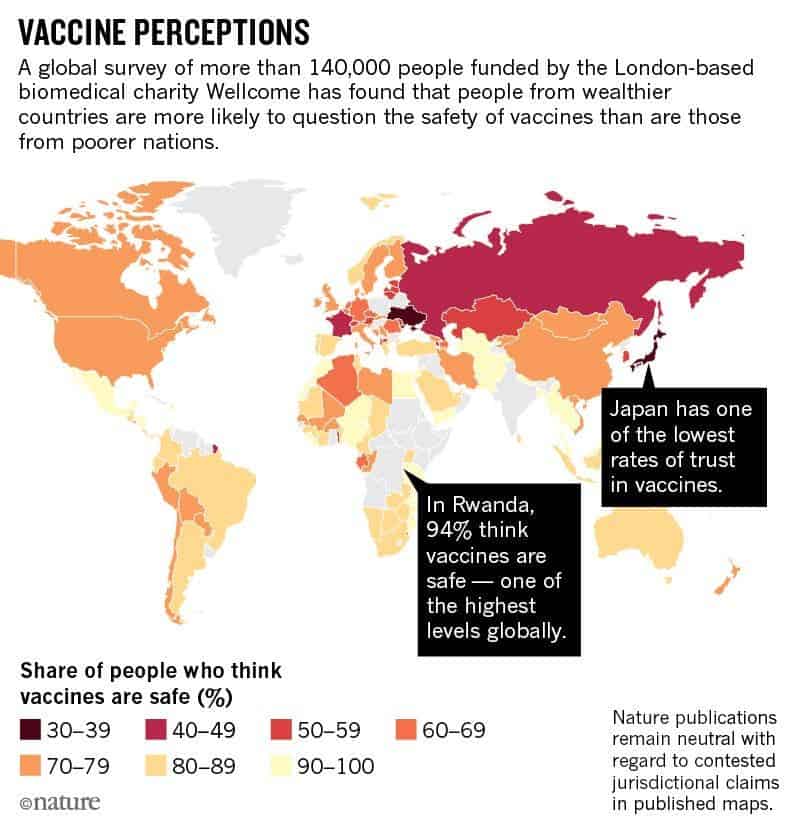 But the number of people who do not believe vaccines are safe and effective is alarming and, until everyone is convinced, we are all at risk.

The latest and greatest global research on public attitudes to health and science has revealed high overall overall confidence in doctors, nurses and scientists and high reliance on vaccines. More than 140,000 people aged 15 and over from more than 140 countries gave their views on the safety and efficacy of vaccines as part of a nearly two-year project funded by the biomedical research charity Wellcome Trust.

What impacts people's confidence in vaccines?

Discover the results of the Wellcome Global Monitor, the world's largest research on attitudes to health and science? https://t.co/liTZostmE2@GallupNews | #wmonitor #VaccinesWork pic.twitter.com/nebymbyizI

The results of the Wellcome Global Monitor, published June 19, suggest that 79% of people worldwide agree to some degree that vaccines are safe, three quarters of the world's population rely on doctors and nurses more than any other and 72% rely on scientists. The survey also shows a first glimpse of what people think about the problems of many countries, including Colombia, Nigeria, South Africa and Vietnam.

Only 72% in North America and 73% in northern Europe said vaccines are safe, but the numbers are still lower in Europe. Only half the people in Eastern Europe and 59% in Western Europe strongly agree or in any way agree with the statement "vaccines are safe." In contrast, two low-income countries – Bangladesh and Rwanda – had the highest confidence in vaccines (97% and 94%, respectively). The report states that this was attributed to the strong commitment of the two nations to vaccines. The numbers remain high throughout South Asia and East Africa.

For most of the world, greater reliance on health systems, governments and scientists translated into high confidence in vaccines, except in Europe where the picture was more complicated, with respondents in France reporting the lowest levels of vaccine confidence : 33% of French respondents disagreed that vaccines are safe, and 10% disagree that they are important for children. Countries with the highest percentage of parents saying they do not vaccinate their children are China (9%), Austria (8%) and Japan (7%).

According Seth Berkley, CEO of GAVI the Vaccine Alliance, "The results from Wellcome Global Monitor illustrate how vaccines have been the victims of their own success. Trust is lower in countries where the terrible impact of many vaccine-preventable diseases is no longer felt. "

.@WellcomeTrust& # 39; S #wmonitor shows why it is crucial that we remain vigilant #vaccine misinformation in the age of social media. #VaccinesWork pic.twitter.com/rrTafNDauO

About 1 in 5 (19%) felt "excluded" from the benefits of science and 57% of global respondents said they do not know much about science.

Along with the science of learning at school or college, trust in national institutions such as government, the military, and the judicial system are among the strongest factors related to trust in science.

The researchers also discovered a gender difference in people's reports about their understanding of science, with men significantly more likely to report a good level of understanding compared to women. The gender gap was higher in Northern Europe and lower in the Middle East and Southeast Asia.

Jeremy FarrarDirector of the Wellcome Trust, said "No matter how great your idea, how exciting your new treatment or the sturdiness of your science, it should be accepted by the people who benefit from it. Vaccines, for example, are one of our most powerful public health tools, and we need people to have confidence in them to be more effective. "

How do we fight the global rebirth of measles? It's a matter of trust. Important perspective of@DrCharlieWellerwith lessons from@wellcometrustGlobal Monitor with@Galluphttps://t.co/qN32sfXRGC

Understanding the causes of low trust is essential. Now we need to find ways to address the specific concerns of each country / region / vaccine and build trust. Vaccines work. Vaccines save lives, but we are all at risk for vaccine-preventable diseases until everyone is convinced.