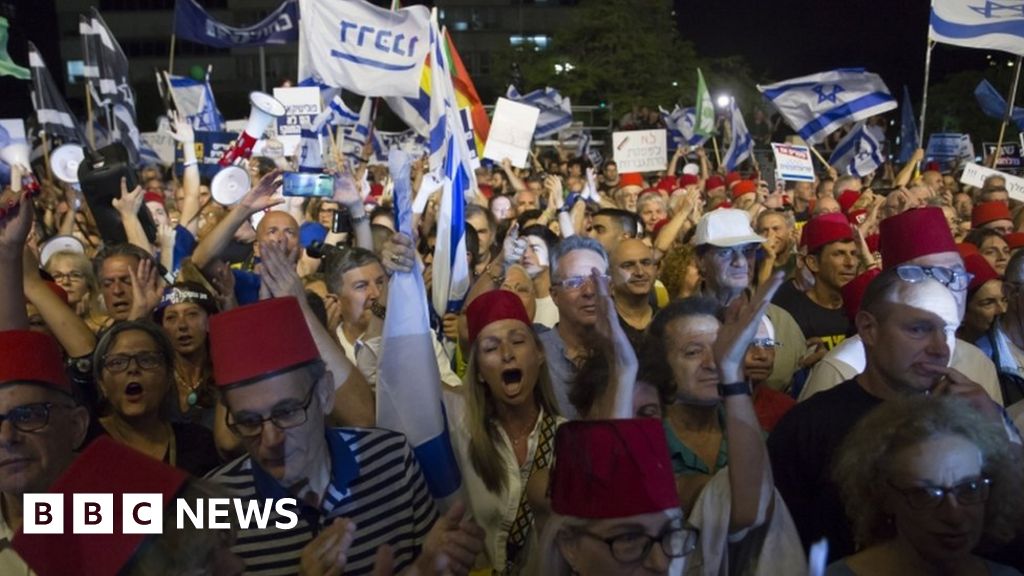 Thousands of Israelis gathered on Saturday for a mass demonstration against measures to grant immunity to Prime Minister Benjamin Netanyahu.

Protesters gathered outside a museum in Tel Aviv for "pro-democracy" demonstrations organized by Israeli opposition parties.

They are accusing Netanyahu of trying to pass laws that save him from cases of corruption.

Netanyahu last month was elected to the fifth term as prime minister.

He may be charged with fraud and bribery in the coming months.

Saturday's demonstrations were the first held by opposition parties since Netanyahu's victory in the elections.

Some protesters wore red Ottoman-style cap hats and carried portraits of Turkish President Recep Tayyip Erdogan, which they say "symbolizes the kind of regime we are opposing."

Organizers said tens of thousands attended the protests, but no official figures were released by police.

Benny Gantz, the former Israeli army chief who ran against Netanyahu in the election, addressed crowds at the rally. He said that Israel's dream is "crumbling" under Netanyahu's leadership.

What are the charges against him?

In February, Israel's attorney general said he was considering accusing Netanyahu of fraud and bribery.

The prime minister allegedly accepted gifts from wealthy businessmen and distributed favors to try to get more positive press coverage.

Netanyahu denies all mistakes and claims he is the victim of a left-wing "witch hunt." Opposition parties say Netanyahu can not continue as prime minister if he is accused.

The Supreme Court will rule on whether he should resign, but opposition parties fear he is seeking legislation that limits the power of the court.

Netanyahu is yet to form a government, despite weeks of talks with potential coalition partners. The deadline for doing so is May 29, when the president may invite another member of the Knesset's legislature to try.