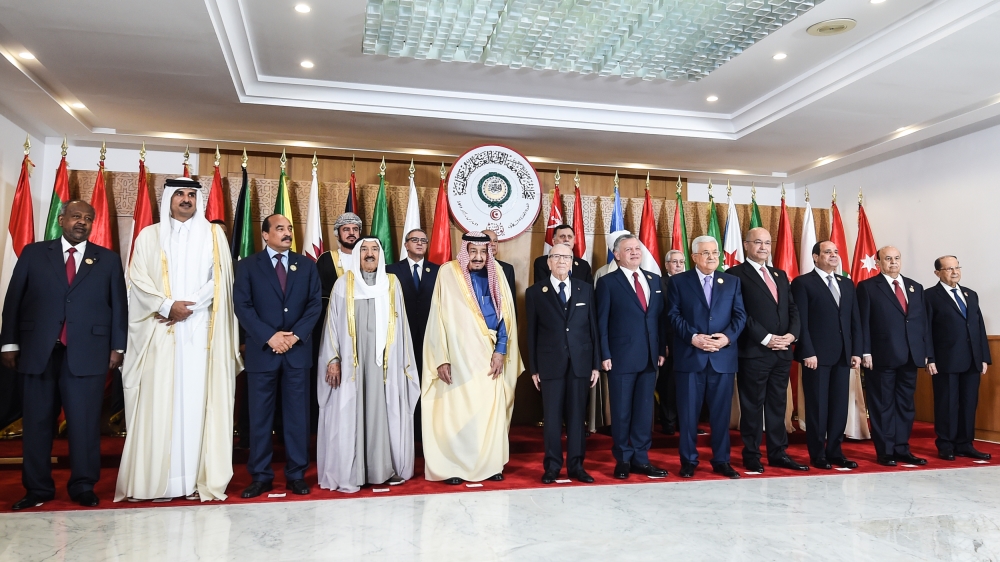 Tunis, Tunisia – Arab leaders meeting in Tunis made a renewed appeal for the creation of a Palestinian state and condemned the US initiative to recognize Israeli sovereignty over the occupied Golan hills.

Held in the Tunisian capital, the 30th meeting of the Arab League began on Sunday against the background of continuous conflicts, serious divisions and disturbances – of the long wars Syria and Yemen for the instability of Libya, and mass anti-government protests in Algeria and Sudan for a major diplomatic row in the Gulf.

In a keynote address, King Salman bin Abdulaziz Al Saud of Saudi Arabia reiterated his kingdom's support for a Palestinian state in the occupied West Bank and the Gaza Strip, occupying East Jerusalem as its capital.

Tunisian President Beji Caid Essebsi echoed the king's speech, reiterating the significance of the Palestinian cause to the Arab world when he called for unity.

"It is irrational that the Arab region remains at the forefront of tensions and crises," said Mr Essebsi, the summit host.

Arab leaders – including Salman, Essebsi and Egyptian President Abdel Fattah el-Sisi – also condemned the recent recognition of US President Donald Trump of Israeli sovereignty over the occupied Golan Heights, which Israel took in the 1967 war.

"We reiterate our categorical rejection of measures that would undermine Syrian sovereignty over the Golan," King Salman said.

However, expectations for any concrete action were low, in part because of the close ties that regional powers like Saudi Arabia and the United Arab Emirates have cultivated with the Trump government, seeing it as a key ally against its main rival, Will.

"There is very little intention of presenting very clear results beyond the usual discourse of establishing Palestinian law and the general position of Arabs on regional issues" Majed al-Ansari, a professor of political sociology at Qatar University, told Al Jazeera.

"I do not think I heard anything that would be a new trend in what would come out of the summit," Ansari said.

Meanwhile, Algerian President Abdelaziz Bouteflika and his Sudanese counterpart, Omar al-Bashir, did not attend the meeting in Tunis. In recent weeks, the two countries have faced increasing demands to resign as thousands have taken to the streets calling for political changes.

Syria's readmission to the League, which was suspended in 2011 after President Bashar al-Assad's brutal crackdown on pro-democracy protesters, should be on the agenda of the summit.

But officials speaking before the meeting said it is unlikely that Syria will be welcomed back soon.

The United Arab Emirates reopened its embassy in Damascus last year, and other Arab states have expressed support for restoring relations.

But Saudi Arabia and Qatar have actively supported rebels attempting to overthrow Assad, and many other states see his government as an Iranian prosecutor who must continue to be avoided.

Commenting on the calls for unity amid ongoing divisions and concerns, Ansari noted that the Arab League has a history of empty statements that are not followed by actions.

"We also know that the statements and talks about the Arab union coming out of the summit do not materialize in any form or form," he said.