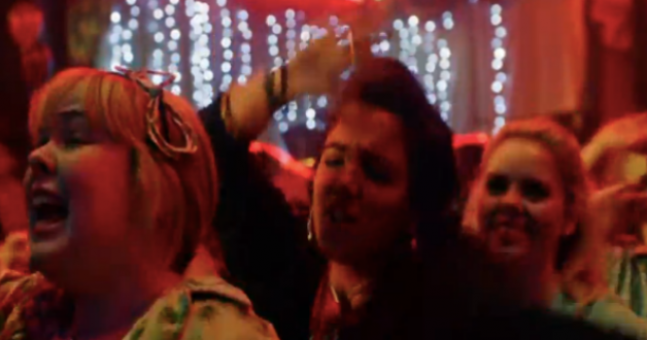 "It's a difficult routine, you know that.You sit on the floor at your own risk"

Despite the fact that Aunt Sarah appeared at a wedding in a white ruffled dress that was exactly like the bride, the first wedding at Derry Girls was a resounding success.

You know, besides the little question of Uncle Colm boring everyone, thanks to his story about gallstones, the wrath on Ma Mary's hat, Michelle trying to buy Macca marijuana – you know Macca..Big Macca … everyone knows Macca?!?!? – and Aunt Bridie being an absolute wagon.

As Granda Joe said, "Sure, a bullet could not get her out," but after stating that neither Ma Mary, our Aunt Sarah, looked like her mother, we knew that all the bets were off.

Oh, yes, there was also Mary's little question to tell Bridie, "Drop dead, you wicked old witch," and she did.

After Michelle does her best to convince the gang to try some weed – remember kids, drugs are for mugs – the tone changes immediately after the song "Rock the Boat" is played.

To quote Michelle "Happy fucking days!" and like many of Derry Girls, this scene really made a nerve with the Irish people.

In addition to Clare warning Michelle that people who use drugs may lose their kneecaps in Northern Ireland,

Eamonn may have waited for the song all night, but it seems the Irish crowd was waiting to see the wedding classic on the small screen.

When JOE met up with Nicola Coughlan and Dylan Llewellyn before Season 2, they confirmed that the cast really needed dance lessons to perfect the scene and that one person was "slightly" reluctant to do another dance scene.

"There's nothing Saoirse hates more than dance lessons. We had them for the first season on the Whigfield scene – Saturday Night, but she's recovered again!" joked Coughlan.

Well, it's far from saying that Derry Girls added another memorable dance scene to their library. Many people agree.

Rock the boat is a national shit institution #DerryGirls

I think Rock the Boat is my favorite scene. #DerryGirls still! #irishweddings

Is this every marriage I was in my childhood? #DerryGirls

hahahahahahahahaha this rock the boat bit is genius! Literally every wedding I've ever been in my life I rocked the boat #DerryGirls

The time when Rock the Boat arrives at the wedding in #derrygirls It's every Irish wedding ever! ?? bright!

When you think #DerryGirls can not be funnier, it's true! #rocktheboat #happy Days

Howling at #DerryGirls making the boat rock! ? The highlight of any 90's wedding!