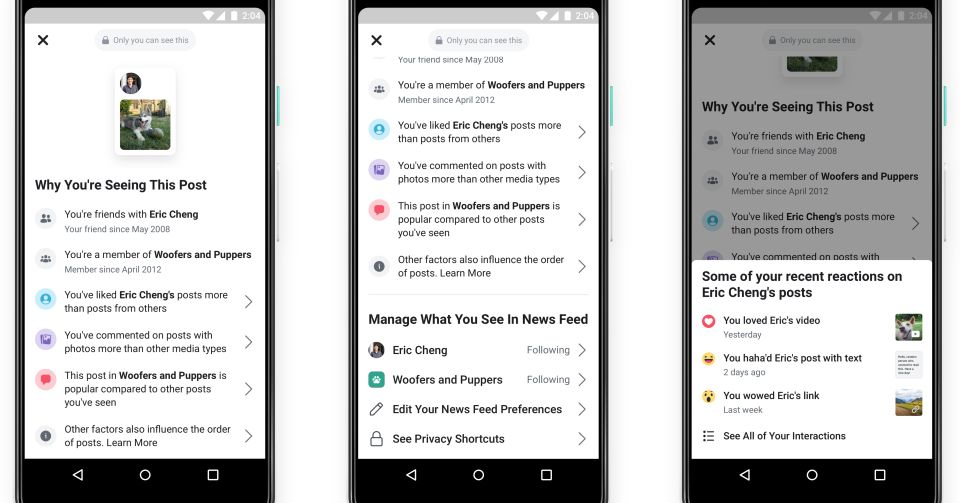 Facebook has announced a new feature called "Why am I seeing this post?", Which allows you to see information about why a specific post has appeared in your Facebook News feed. The new option was announced on Sunday and is an expansion of an existing feature that Facebook already offers for ads. In addition to seeing why a post appeared, it will also give you control over how often you'll see similar posts in the future.

You can access the new option using the drop-down menu in the upper right corner of the post. Once opened, you'll see the logic of Facebook to know why you'd like to see a post. This can include the number of times you've interacted with the post's author in the past, the types of posts you interact with (such as photos or videos), and the overall popularity of the post itself.

Why am I seeing this ad? Also being updated

In addition to explaining why your News Feed is showing a specific post, the new feature also provides shortcuts to tools that control whether you'll see similar posts again in the future. This includes the "View first and stop following" options, as well as linking your Newsfeed Preferences.

Why am I seeing this ad? The service is also being updated as part of the changes. Facebook already provides you with basic information about how your ads were directed to you, for example, by telling you that an advertiser has chosen to target individuals your age and gender. You will now see additional details, such as whether the advertiser has sent a mailing list with your email address.

We have long argued that Facebook News Feed needs to start explaining if the service wants to regain the trust of its users, and these new options are an important step in that direction. However, this does not address the most fundamental service issues, such as the "filter bubble," the idea that business personalization tools such as Facebook and Google have isolated us from opposing viewpoints – this explains just how this was created.

The changes are being launched starting this week and should be available to all users by mid-May.