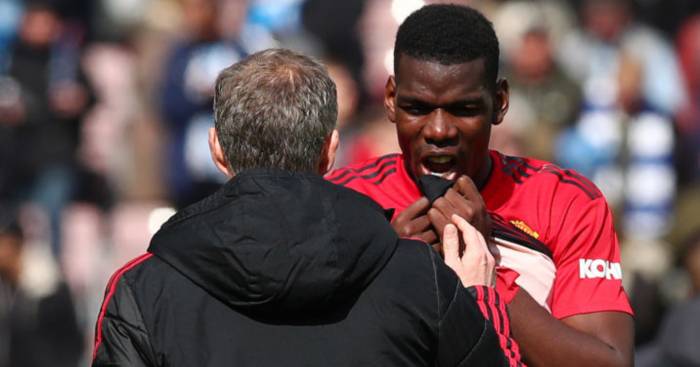 Manchester United boss Ole Gunnar Solskjaer seemed to make a twist in the comments that he could "build a team around" by Paul Pogba.

Pogba, who was appointed in the team of the year of the PFA Cup, had a resurgence brilliantly after Ole Gunnar Solskjaer took the place of Jose Mourinho, but his form has fallen again in recent weeks.

International France was linked with a move to Real Madrid for a while, but rumors have increased since Zinedine Zidane returned as his manager.

And those rumors have been substantiated by allegations that Pogba has ruled that he wants to quit following United's failure to qualify for the Champions League and the fact that a clause in his agreement means his salary will be reduced by 25%.

And manager of United Solskjaer, talking about what he learned during his first few months in office, seemed to suggest that he is still trying to figure out who he is trying to build the team – far from the comments he made when he took command of Mourinho. replacement.

"He's been the same as the others. The attitude has been perfect and this is key – you must be tired at the end of every game.

"He has been first class and we are looking to build a team around him, of course, but there are many quality players [in this squad].

However, when asked MUTV about the club's tough end to the season, Solskjaer appeared back and suggested that he is not sure who he can build side out there.

"I learned that I do not like to lose. I like to win," Solskjaer said when asked about what he learned.

"We started fantastically. The boys were unbelievable when I walked in. We were positive. We won games. The whole group came together and I enjoyed winning, but I know that football is difficult.

"You can not expect everything to be like this and reality hits us.

"We came in a few really, really focused games with the entire team and I thought it was fantastic.

"So you learn a lot when you go through difficult times and think about who we can build this team and who we think will take the next step, because we need to move to the next level."