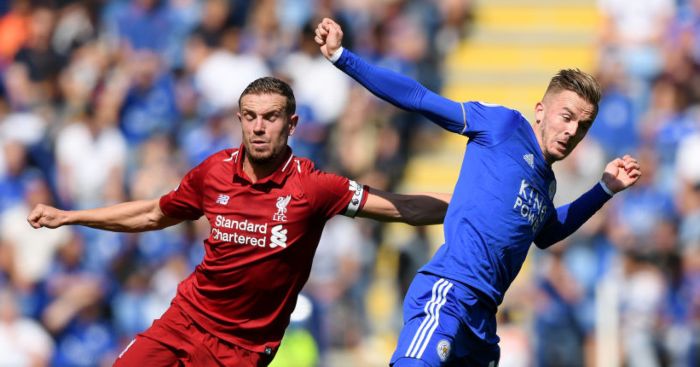 Liverpool’s 100% Premier League record is under serious threat on Saturday when they welcome Brendan Rodgers back to Anfield. Leicester City are genuine top-four challengers, and in a season of disturbances at Tottenham, Chelsea, Manchester United and Arsenal, they might even be the strongest team Jurgen Klopp will face domestically bar Manchester City.

It could end up being the best non-televised game of the season, although it largely depends on the formations. Here are five tactical questions ahead of Liverpool v Leicester City:

1) Will Rodgers use a conservative three-man midfield or go for broke?
Leicester have the technical ability and the tactical nous to finish in the top four. Their only barrier to doing so is how much they believe they are capable, because so far Rodgers has reverted to defensive tactics against Big Six opponents and in doing so scuppered their chances. At Old Trafford and Stamford Bridge he added a third central midfielder – Hamza Choudhury – and moved James Maddison out wide, severely limiting Leicester’s creativity. They should have won both matches but ended up with a solitary point.

When Youri Tielemans and James Maddison play as dual tens in a 4-1-4-1 formation Leicester can take on anyone in this division. Rodgers has imprinted a clear tactical identity on the team in just a few short months, prioritizing high pressing (they top the charts for tackles) and incisive vertical passes into the final third that get Jamie Vardy in behind before the opposition has the chance to set themselves.

Leicester’s unusually straightforward style of possession football is very impressive, yet soon as Rodgers moves to a flatter 4-3-3 they are nowhere near as dynamic. Maddison drifts in from the left, only to find himself without an outlet on the wing when he receives the ball, while Choudhury is unable to pass forward with enough urgency. The Foxes will most likely continue with the more conservative system at Anfield on Saturday, restricting space for Liverpool but eventually hindering themselves as much as the opponent.

Going for broke might be the riskier option, but it's worth it: Leicester can outfight and outthink a tired Liverpool side this weekend, although only if they believe they are worthy of approaching the European champions as equals.

2) How does Leicester get Vardy in behind Liverpool’s high defensive line?
If Tielemans and Maddison float in tandem in the half-spaces then both players could find enough room either side of Fabinho to then feed Vardy, but assuming it's 4-3-3 the visitors counter-attacks become a lot trickier. It's all well and good knowing that Liverpool play a very high line, but actually breaking it has been beyond all of their opponents so far this campaign.

Fabinho's work screening behind Liverpool's midfield tends to keep sides penned in, snuffing out the counter at source, and so his battle with Tielemans will be crucial. If there's one thing Leicester can learn from Salzburg's performance on Wednesday night it's to play with urgency, taking quick free kicks and capitalizing on the slightest opportunity to break beyond Fabinho.

It will not be an easy task, and indeed with so much pace in the Liverpool defense it is unlikely Vardy will get the sort of one-on-one opportunities and he thrives in Big Six matches.

3) Will a territorial battle of the full-backs decide the game?
Leicester’s midfield will keep it tight, easing off from their usual pressing game to surround Fabinho and force the hosts into sideways passing. Consequently central midfield should be particularly congested on Saturday (especially with Maddison and Ayoze Perez cutting inside and Liverpool's forwards generally playing narrowly), which is why the individual battles between the two sets of full-backs will be crucial.

Will the threat of Liverpool's marauding pair curb the Leicester full-backs' instincts, or will the thought of facing an in-form Ben Chilwell and Ricardo Pereira see Trent Alexander-Arnold and Andrew Robertson hesitate more than usual?

The territorial swing of the match should come down to how the two pairs size each other up. Leicester’s are more likely to be pinned, of course, but should Pereira and Chilwell find joy on the early counterattack on then the hosts may second-guess themselves. Neutrals will be hoping for a chaotic end-to-end match, but for that to happen we need all four full-backs to consistently attempt to push back their rival. Again, unfortunately it is far more likely that both sets will play with caution.

4) Can Firmino find space around Ndidi or will Klopp be forced to change formations again?
So far we've predicted a cagier affair with fewer clear-cut chances than in Liverpool-Leicester matches of recent years, which could mean a stodgy match like last weekend's 1-0 win at Sheffield United. There, Klopp was forced into a bold change to a 4-2-4 formation towards the end to untangle the midfield and open up the pitch.

But before it gets to that stage, Klopp will be hoping Roberto Firmino holds the key to opening up the Leicester defense. Wilfred Ndidi is a superb midfielder who, in tandem with Choudhury, should squeeze out the lines between defense and midfield as Sheffield United managed at Bramall Lane, but on Tielemans' side the visitors could have a problem. He is slightly less disciplined, while Firmino has an outstanding ability to find the weak points and exploit them.

Look out for Firmino dropping off the front line around Tielemans. Should Liverpool's midfield get the ball into his feet early and often, they won't need to rely on more drastic attacking tactics in the late half hour.

5) Will Salah be sharp enough to capitalize on Soyuncu errors?
The head-to-head standout at Anfield is between Mohamed Salah, in a form following a brace against Salzburg, and Caglar Soyuncu, a favorite fans at Leicester but a player still adapting to the pace of English football. The Egyptian holds a major advantage in the right-center channel, his direct runs with the ball in tight spaces here likely to expose any hesitancy or positional indiscipline in Leicester’s new center-back.

Soyuncu has caught the eye on Match of the Day with clever flicks or heroic block tackles, but over 90 minutes he is slightly on the wild side. He may well be caught flat-footed in crucial split second moments when Salah plays one-two with Firmino and makes one of his darts between center-back and left-back.