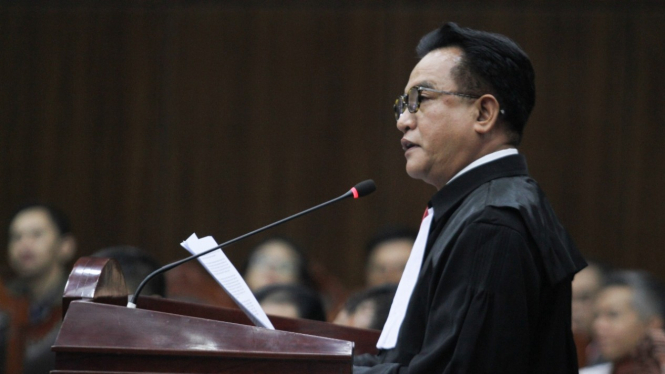 ALIVE – Jokowi-Ma'ruf Amin Legal Team Chairman Yusril Ihza Mahendra said he would sue several Prabowo Subianto-Sandiaga Uno witnesses who were considered false statements in the trial of the 2019 presidential election. A witness to be reported was Beti Kristiana who was carrying a fake vote envelope.

Responding to this, members of the Prabowo-Sandi Legal Team, Teuku Nasrullah, invited Yusril to bring the case to criminal trial.

"If there is a lie, in giving a statement, he is involved in criminal law," Nasrullah told the Constitutional Court in Central Jakarta on Friday, June 21, 2019.

According to him, Yusril's plan to convict Beti was a veritable form of fear of the witnesses of the Prabowo-Sandi camp who were about to testify at Court so far.

"However, it is feared by witnesses 02 that were related to the opportunity to be criminalized. Including physical threats, we asked for protection (from the beginning)," Nasrullah said.

Nasrullah also recalled that there are rules in the Criminal Procedure Code that claim that false testimony can only be criminalized after the panel of judges stipulates that the witness is lying. While so far there has been no decision.

"Now there was no decision of a judge that he made a false statement?" Nasrullah asked.

The Constitutional Court Assembly, Nasrullah continued, has not yet determined Beti to give a false witness. So it was strange for him to see Yusril's attitude.

"Investigators can not just investigate the report. If there is no judge, it can not be investigated," he said.

Nasrullah admitted that Prabowo-Sandi's legal staff recorded evidence of envelopes from the Beti witness for the court clerk. However, his party was handed over to the Assembly of the Constitutional Court that ruled.

"If there is an envelope, we do not know if the envelope is false or false, which brought witnesses." The witness explained that the envelope was obtained in the courtyard of the district office. , added Nasrullah.