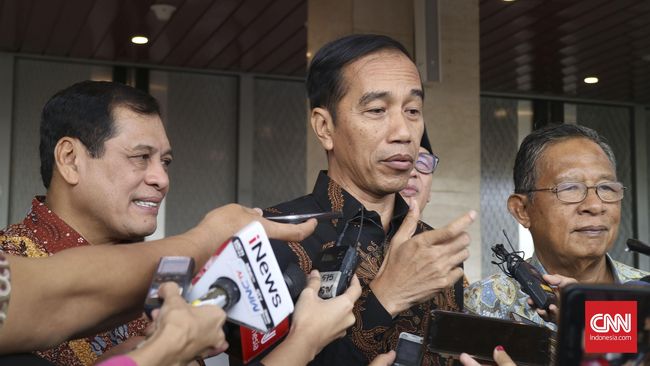 Jakarta, CNN Indonesia – President Joko Widodo this morning inaugurated Monument to the Time Capsule in Merauke, Papua. At the time, he argued that this 2.5-hectare monument was the same as the headquarters Avengers.

"I also followed the social media that were busy talking about the Time Capsule Monument. He said the form is like the headquarters of the Avengers, which is very futuristic," Jokowi said in an official statement on Friday (11/16 ).

On that occasion, Jokowi stated that not only the building, this monument also has the same spirit and enthusiasm as the Avengers, who are big dreams, how to protect many people and people weak.

This monument is the climax of the government's "National Movement of Workers" three years ago at Zero Kilometer, Sabang, Aceh, which contained seven dreams of the country's children. The dreams were realized in about 34 provinces up to 24,089 kilometers.

"Through this monument, we not only put our dream as a great nation, but let's work hard, work together, try to realize that great dream," said the former mayor of Solo.

Another hope is that the community and government apparatus will be free from corruption, equal distribution of infrastructure development in Indonesia, Indonesia becoming an independent and influential Asia-Pacific country and has become a barometer of world economic growth .

"Then, later, in 2085, we will be opened by our successors." "We can make these seven great dreams come true, so this is not just a common monument, this is our dream monument together," Jokowi said.

Capsule Monuments When built by the Ministry of Public Works and Public Housing (PUPR) through activities of the Green Open Space from 2016 allocated to the National Budget DIPA in the General Directorate of Cipta Karya-Ministry of PUPR.

The development of Phase I was carried out two years ago in the form of foundation work with a budget of R $ 7 billion. Phase II continued in July 2017 and was completed in November 2018, with a construction cost of Rp82.9 billion. The development is carried out with PT. Nindya Karya as the contractor.

The architecture of the monument was designed by the architect of the Yori Inter-Early Principle, adopting Papuan cultural elements. The Capsule Time will be placed on top of a monument building inspired by the Dani War Tower, with five accesses to the building representing five Indian tribes Merauke (Malind, Muyu, Mandobo, Mappi and Auyu) as the Tugu Guardian Time Capsule.

The development also adopted independence figures from Indonesia, 17, 8 and 45. The monument is 17 meters wide, 8 meters high and 45 meters long. The interior of the monument is decorated with reliefs in the journey of Indonesian culture, Pancasila and Papua.

Of the total area of ​​the monument, 1.5 hectares will be used as a square. In addition to being a public open space and tourist spot for the people of Merauke, it is believed that the Capsule Capsule Time manages local economic growth. (chris / wis)