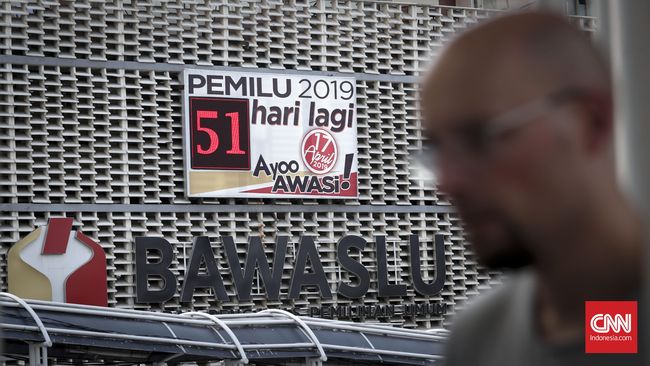 Jakarta, CNN Indonesia – Site manager for voting counting devices, Jurdil 2019plans to go to the Office of the Electoral Supervision Agency (Bawaslu) to confirm the site's blocking on Monday (4/22).

"We plan to go to Bawaslu on Monday to ask about it (blocking). Because the permission has been revoked, we want to ask them for an explanation," said Rulianti, a member of Jurdil in 2019, through a YouTube account Bravos Radio Indonesia accessed live CNNIndonesia.comSunday (21/4).

Rulianti said she was shocked to learn of the blockade of Jurdil's site in 2019. She never received any warning from Bawaslu and the Ministry of Communication and Information.

Rulianti and several members of Jurdil 2019 only knew about the blocking of information circulating in the group of short message applications Whatsapp. The blocking was made because the Jurdil 2019 site contained negative content.

Later, Rulianti only discovered that Jurdil's 2019 site was blocked because it violated the permission because it published the results of the quick count of the presidential elections of 2019. Although the permission presented to Bawaslu from the beginning was an electoral monitoring agency.

He denied that the 2014 Jurdil site published the results of the 2019 Presidential Election quick count. Rulianti said he only showed the C1 form scan data distributed by the volunteers.

"We are called breaking the rules with publication quick count, although we have not done anything quick count. We only received information from C1 from volunteers, polling stations, then informed the public, "he explained.

The party itself claims to have submitted an authorization to Bawaslu as an election monitoring agency on behalf of the PT Prawedanet Alliance of Technology. The institution was registered in Bawaslu as 2019 election observers with the Accreditation certification numbers: 063 / BAWASLU / IV / 2019.

"We requested permission first from Bawaslu as an election monitor. It must have a legal entity, so use mine, the PT Prawedanet," he said.

Although the Ministry of Communication and Information has blocked the jurdil2019.org page, the Jurdil 2019 application is still accessible. In the application, anyone can enter data.

The lock was caused by the manager of Jurdil 2019, allegedly abusing the given permission, ie as an election monitor. But Jurdil 2019 actually reported the calculation quick count and real count which is considered to violate the rules.

Meanwhile, other institutions outside the 40 registered institutions are prohibited from conducting surveys or quick counts that are published to the public, because according to law, research institutions must register with the KPU.