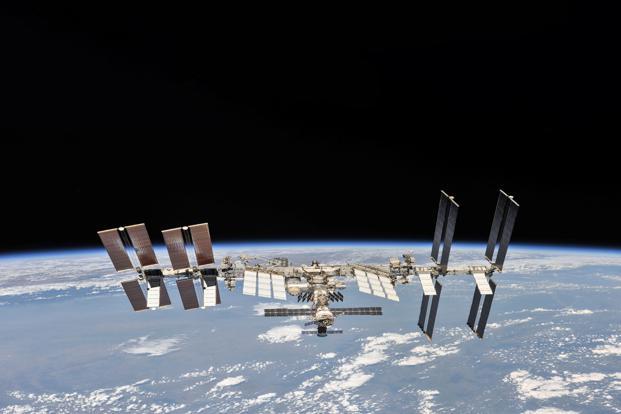 The ISS photographed for Expedition 56 crewmembers of a Soyuz spacecraft after unmasking. Photo: Reuters

Every time I pass up and I'm there to watch, several passersby are curious about my pointing finger. "Take a look," I tell them. "See that shiny object that is moving?" Many people stop and look, often in wonder and pleasure.

There are others, however, who refuse to look up. Face set in dark masks, without a second glance at me, they push and keep walking. Somehow, they were persuaded that looking at something in the sky is dangerous, whether for their health, psychiatrist or both. "It's the International Space Station (ISS)!" I'll tell them when they pass. "It's not always the way we see it!" I may also be talking to an octopus, for all the effect I have on your receding selves fast. I know they have their beliefs, but the irrationality of all this – irrationality, in the face of the ode to the human ingenuity that is passing there – invariably makes me a little sad.

But not by much. Because others more than make up. We'll be together, our heads leaning back, watching what is for a few minutes the brightest object that is not the Moon's run in the night sky. Of course, it's just a gleaming white spot, but those moments are filled with an almost inexplicable emotion, a strangely exciting sensation of being somehow attached to the intrepid astronauts on that spacecraft, somehow part of this most remarkable of human endeavors.

"Hey, did you see Sunita Williams waving?", I ask, and the "yes, right!" It looks like they are like the penthouse at the top. the ISS passing in front of the Milky Way in Wales, UK. Photo: Alamy

Every few weeks, NASA notifies me of an upcoming meeting with the space station. This never fails to impress my comrades when I tell them, "Do you work for NASA? Wow!! "- but it sounds infinitely heavier than it really is (no, I do not work for Nasa). Anyone in the world can sign up for these alerts in a matter of seconds, and you can get them by email or SMS. That's how I know when to go look for him.

NASA's notification appears when there will be an ISS overhead (properly called the "viaduct", which normally makes me smile) in the next 24 hours, but only if it happens at dusk or dawn. Why only in those times? After all, the ISS is circumnavigating the planet all the time, completing one orbit every 90 minutes or so. I mean, I'm writing those words at 1 pm and I know of a live map of the way the station passed almost less than an hour ago. Why did not NASA warn me about this viaduct? Why would not I have seen the ISS, even if I had looked at it right now?

Well: during the day – or, more correctly, when the space station is flying over the part of the planet that is bathed in sunlight – the sun itself is so bright that it drowns anything else in the heavens that it can emit or reflect the light . When the ISS navigates in the dark, the sun is on the other side of the planet and the station is too close to the earth's surface for sunlight to reach. So it is only in those few moments between which the angle is right and we can see the ISS through the sunlight, which is reflected in us as if it were using a gigantic mirror. If you have signed up to receive ISS alerts, NASA will check if the ISS will fly over your location on Earth during those hours of sunrise or sunset. If so, you will receive a message like this:

Here's the thing. I get this warning and leave a few minutes before 8.05, looking west. Exactly at 8:05 PM – not 8,04, not 8,06 – the bright spot appears exactly in that direction. Unlike almost everything in the sky, it is moving, certainly moving faster than anything in the sky other than an airplane. It gets a little brighter as it gets higher in the sky. Exactly 3 minutes after he appeared, it was over. This is how it has been, every time I went out to see the ISS.

The accuracy is impressive, remarkable. And yet, it would hardly be a surprise. Even if the ISS is orbiting the Earth quickly, we know exactly where it is at a given moment. There are sites that track your movement in real time. We know that your path changes with each orbit and you can see this happening at these tracking sites. You learn that you are traveling more than 27,500 km / h, some 400 km above us. You can find out about upcoming sightings at your location. In my case, the next is on November 15, with the time and direction and altitude listed exactly as I know it will be in the email that will arrive on November 14. There is even a feed of cameras mounted at the station, so you have an idea of ​​what our planet looks like above (hint: just beautiful).

Yes, the accuracy is impressive. But if you think about it, that's the way it has to be. Space exploration would be impossible without this precision. To get an idea of ​​what I mean by that, just consider one example. The ISS about London. Photo: Alamy

As you no doubt know, we ship spacecraft to Mars; Own India Mangalyaan has been orbiting this planet for more than four years. How do we get this done, given that, on average, Mars is about 220 million km from Earth? Let's say we looked at Mars on a nice night, imagining a straight line connecting the planets and sending Mangalyaan shooting toward Mars, just as you can fire a gun at a target. What would happen if you were a small fraction in your goal – a thousandth degree, shall we say? With a typical weapon and its target, such a mistake would not matter. Your bullet will still strike the bull's eye. But with a certain red planet that is 220 million kilometers away, you would have almost 4,000 km. That is, with an error like this, Mangalyaan would fly comfortably by Mars and enter the vast empty spaces beyond. Let's face it: we can not allow an error like this.

In fact, of course this is nothing like the way we ship spacecraft to Mars, or anywhere. Because both planets are moving because we have to take into account and actually take advantage of their respective gravitational fields because we must also take advantage of the times of the year when Mars and Earth approach 220 million km because of a host. of other factors – telling the way Mangalyaan It took to get to Mars, resembles a straight line is like saying that my tennis game resembles Roger Federer (hint: it is not). After it was released, Mangalyaan made a series of ever-widening elliptical orbits around the Earth, the last of which then catapulted it into a long trajectory to where it is now – circling Mars. Straight line? Not in your life.

And yet, this complicated path is also a reflection, a tribute to the same idea of ​​precision in space travel. Think of the calculations needed to explain gravity. Or to get Mangalyaan orbiting the earth, but increasingly broad. Or to put it into orbit around Mars. Get even a little wrong and the ship will collide back to earth, either it will go into space, or it will explode.

Somehow profound, all this is because I signed up for NASA's ISS alerts. That's why I go out to watch the station, most of the time I hear it will be visible. That's why he never ceases to thrill me when he shows up. That's why I insist on the others around me to look at that bright spot as well, as it goes through overload.

For it is much more than just a bright, beautiful moving point as this vision is.

The way I see it: down here on earth, we have our irrationalities and murderous quarrels and filthy rivers and lying leaders and meaningless monuments, and often enough, it all drops me down as I'm sure will let you down. But then you can look up and marvel at that point, that symbol of the best qualities of our species. Everything about the ISS – from the precision of its path to the way it was built, from everything that seeks to reach the courage of the people within it – speaks to me of the wonder of science and the generous spirit of humanity.

As the International Space Station completes 20 years in orbit, that's something to think about.

Want to sign up for alerts? Go to http://spotthestation.nasa.gov