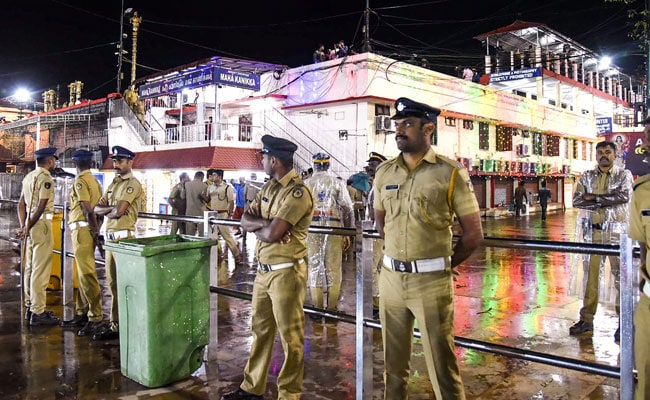 A large number of BJP and RSS workers protested outside the official residence of the Chief Minister of Kerala, Pinarayi Vijayan, on Sunday night against the detention of more than 30 people in the Sabarimala Temple.

Members of the Bharatiya Janata Party (BJP) and their mentor, the Rashtriya Swayamsevak Sangh (RSS), gathered in front of Cliff House – Mr. Vijayan's official residence at the Nanthancode in Thiruvananthapuram.

Simultaneous protests were also held at various places throughout the state in Aranmula, Kochi, Kollam, Alapuzha, Ranni, Thodupuzha, Kaladi, Malappuram and Idukki, among others.

To further intensify its agitation against "high police dexterity," a full day of statewide uprising will be held on Monday by Yuvamorcha, the young wing of the BJP, its chief said.

"We have organized protests across the state against this state emergency," Yuvamorcha State President Prakash Babu told PTI.

Demonstrators were taken into custody Sunday night at Sabarimala Temple, after new protests broke out in the Nadapanthal area of ​​Sannidhanam, where hundreds of devotees fought against police restraints.

Although there were unconfirmed reports that the detained protesters were taken to the Maniyar police camp in Pathanamthitta district, officials at the Pamba Police Station, which is about 3.5 km down, have denied any knowledge.

On the second day of the two-month pilgrimage season, the devotees gathered on the covered path of the temple when they were invited to leave Sannidhanam.

Due to the first incidents of violence at the hilltop sanctuary, the police had imposed strict restrictions on the devotees in Sannidhanam, not even allowing them to stay back at night.

"Section 144 had been declared in the area. We asked them to disperse after the Harivarasanam, but most of them refused," the SP said, adding that the police were not against devotees wishing to offer prayers.

"Those who have to offer" neyyabhishekam "(deity anointing with ghee) may be left behind." They can recite prayers as well.We are not against it.Police will help those who want to offer prayers, "he said .

Police sources alleged that they had information that demonstrators could create problems in Sannidhanam and therefore precautions were taken accordingly.

Rajesh, one of the demonstrators, said: "We are devout and we begin to recite prayers, but the police did not allow us, saying that Section 144 (prohibitive orders) was imposed."

He said he did not mind being arrested for reciting prayers in Sannidhanam.