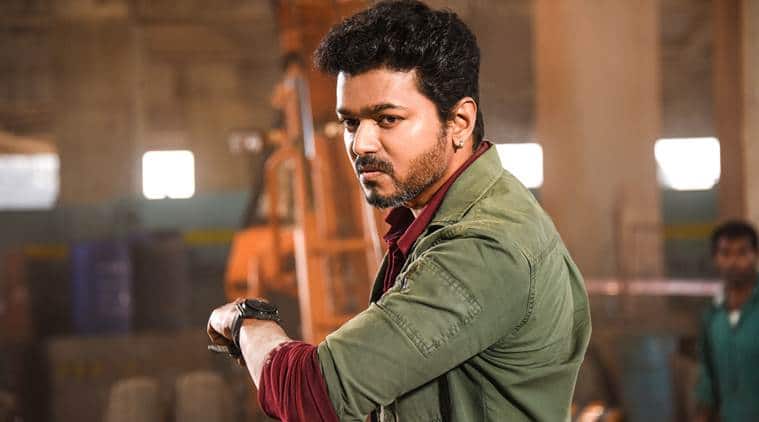 Sarkar will hit theaters on November 6.

Although Deepavali has everything to do with new clothes, sweets and cookies, the festival is incomplete without having the latest release in theaters. Deepavali falls on a Tuesday this year and Thalapathy Vijay fans have started celebrating as the most anticipated Sarkar is here. The film marks the third collaboration between the director of Sarkar, AR Murugadoss, and Vijay, after Thuppakki (2012) and Kaththi (2014).

In the late 80's or early 90's, you'd see that a dozen "big movies" would compete with each other and no release would be delayed due to "competition." Now there are hardly any festival releases, and the industry is quite happy with it, leading to an undivided deal as the top actors monopolize festival dates. 2015 Deepavali saw the release of Kamal Haasan's Thoongavanam and Ajith Kumar's Vedalam. While in 2016, there was a clash between Kodi of Dhanush and Kaashmora of Karthi. During last year's Deepavali, we had Mersal, Meyaadha Maan and Chennayil Oru Naal 2.

Previously, it was announced that Suriya-Selvaraghavan's NGK would also be releasing this Deepavali. Eventually, producers announced on social media that the film will be released later. The creators of Thimiru Pudichavan also decided to leave the competition due to the lack of good theaters. This paved the way for the release of two small films – Kalavaani Maapillai and Billa Pandi.

However, Sarkar remains the clear winner because of the incredible popularity of the "mass hero" Vijay. In Tamil Nadu, the advance reservation was opened on November 2 and Sarkar will be screened in more than 3,000 cinemas across India (including a Telugu version dubbed).

Under the condition of anonymity, a Tamil producer said: "It's good when a film has a wide release. This prevents pirated copies from reaching Tamil Nadu after the immediate debut abroad. After Rajinikanth, it's Vijay at the box office. Sarkar's theatrical rights were sold for more than 100 million rupees. Sarkar is a recent example of a big star getting a mid-week launch. It does not have to be a Thursday or Friday. An actor of Vijay's stature who has a loyal fan base and an opening would easily fill the theaters. Theri was also released on a non-Friday. The industry understands the importance of a festival launch, since so much time and money is spent on the production and finalization of the release date, as well as adhere to it. "

Why does the festival have a great attraction? "No big movie will miss the opportunity to hit the screens that day because of maximum occupancy in theaters. Whatever the film used to collect in a week, it pays off today an impressive 70% deal. Just for a "big star" project, audiences mostly go to theaters because the rest can be legally watched on alternative digital platforms, such as Netflix. The success of any film depends on strong producers, distributors, and a firm launch date that ensures an excellent opening. Sarkar will stay for a while at the box office, and it will not be easy for other films scheduled for release in the coming weeks, "said one commercial analyst.

From the days of the MGR-Sivaji Ganesan to the present day, the directors strive to launch their films in Deepavali, since it brings the moolah and recognition. For example, Haridas, by MK Thyagaraja Bhagavathar, was released in Deepavali (October 16, 1944). He lasted 114 weeks at the Broadway Cinema in Madras, and set an unprecedented record of being the first regional film to do so. Another release of Deepavali, Rajinikanth's Muthu became the highest-grossing Tamil film at the time, 175 days long.

Sarkar will be an important film in Vijay's career. During the audio release of the film, the actor said he would fight corruption if he became the chief minister of Tamil Nadu. He further added: "If I become the CM, I will not" act "as the chief minister." His statement raised many eyebrows and made everyone speculate if he is insinuating political ambitions (after Kamal Haasan and Rajinikanth). While his earlier Deepavali release, Mersal, had a bit of politics, Sarkar is expected to have a lot of it. One can remember how the BJP sought to ban Mersal for politically charged dialogues about GST and demonetization. Several BJP leaders, including Tamilisai Soundararajan, condemned the "misconceptions about government schemes" and, in fact, called for the removal of similar representations. Facing critics of the party in power, the team had eliminated the controversial scenes.

The father and filmmaker of Vijay, SA Chandrasekhar, has been vocal about the actor's entry into politics. Even in October, he said that as a Tamil, Vijay wants to do good to his people, and there is nothing wrong if he takes the initiative.

The direction AR Murugados generated a tremendous interest among the spectators, in spite of its controversial polemic. Chennai sports coach Shyam Sundar, a fervent Vijay fan, said: "I'll be watching FDFS with my family at Rohini Cinemas, Koyambedu. Although K Bhagyaraj has told the story of Sarkar in one of his interviews, I am still looking forward to watching the film as many other fans of & an; (Vijay) out there. None of these controversies would really affect that. There is no way to stop Thalapathy. "But Shyam is disappointed by the lack of morning shows. "The Tamil Nadu government has not yet given permission. If this is not politics, what else is it?

For all the latest entertainment news, download the Indian Express App