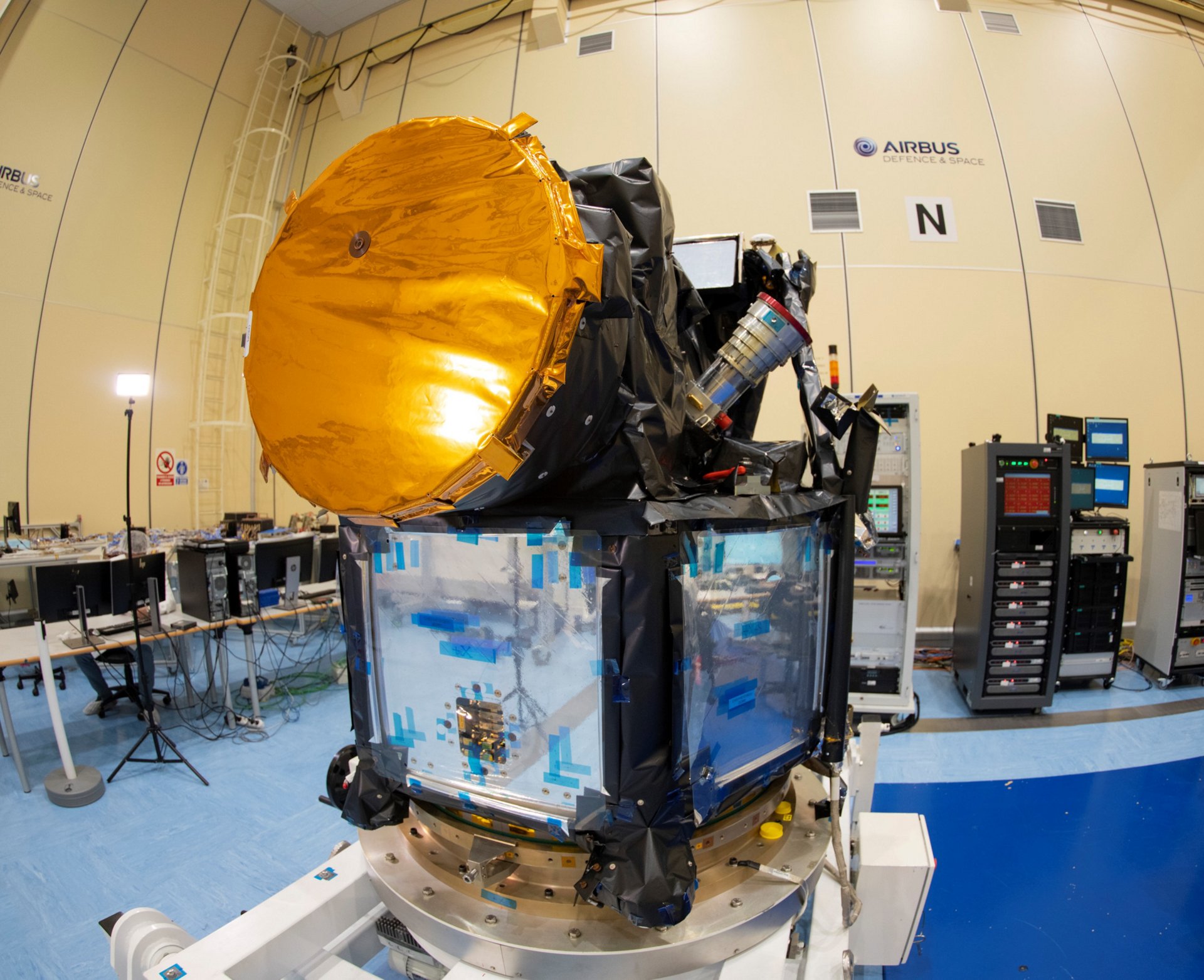 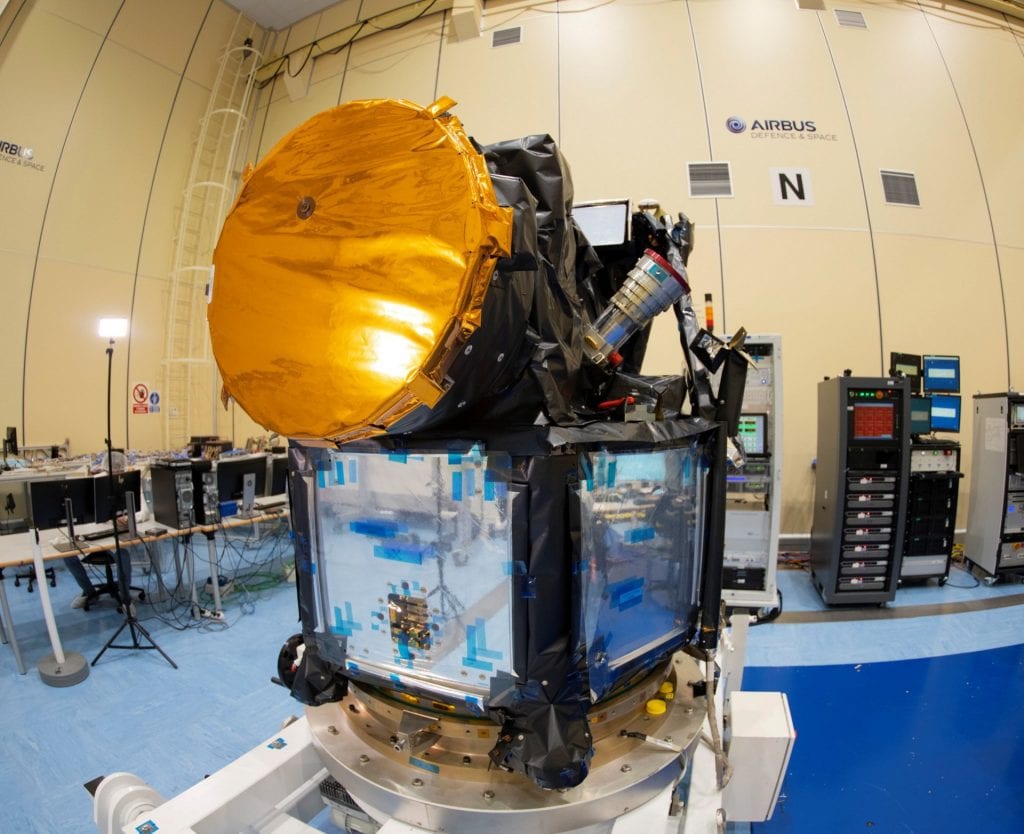 WE: Airbus Defense and Space has completed the construction of the Cheops satellite (Featuring the Exoplanet Satellite). The European Space Agency (ESA) has recently given the green light in the Qualification and Acceptance Assessment. Representatives from ESA, CDTI and Airbus explained the mission, satellite and Spanish participation in the Cheops program at the media event today at the Airbus website in Madrid-Barajas.

Günther Hasinger, director of science at ESA; Javier Ponce, general director of CDTI; and Rafael Rodrigo, Secretary General of Scientific Policy of the Ministry of Science, spoke at the event. They were received by Fernando Varela, Head of Space Systems at Airbus in Spain.

Günther Hasinger of ESA described the importance of this satellite: "We are excited to launch CHEOPS later this year. With its highly accurate observations of stars we already know to host exoplanets, the mission will allow a characterization of the first step of the composition and nature of the planets beyond our Solar System. CHEOPS is the first ESA satellite dedicated to exoplanets, paving the way for two more missions in the next decade and consolidating European leadership in exoplanet science. "

According to the CDTI, the importance of Cheops goes beyond the discovery of new exoplanets. It is ESA's first full mission to be led by Spain. The leadership demonstrated by Spain in Quéops will have positive effects on future space missions. Its launch comes at a key time for the country, as Seville will host the next ESA Ministerial Council in late 2019, which will undoubtedly help consolidate this leadership in space missions.

"Airbus has exceptional expertise in space science missions and, for Cheops, we are the prime contractor of the first ESA satellite conquered by Spain in open competition," said Fernando Varela, Airbus' head of space systems in Spain. "Now that we can see the launch on the horizon, we congratulate all the teams involved for the excellent work. This project consolidates the role of Airbus in Spain as the leading satellite manufacturer and reliable prime contractor for the Spanish space industry. "

Cheops is the first of ESA's small missions, designed to be ready to fly within five years, and using proven technologies to pave the way for larger, more ambitious missions. He will undertake an ambitious scientific mission focused on defining the properties of planets orbiting nearby stars. The instrument that will study these exoplanets is a Ritchey-Chrétien telescope supplied by the University of Bern, Switzerland, which is integrated into the highly flexible and compact Airbus AstroBus-S platform.

The Airbus AstroBus platform has been used successfully in other missions, including: Spot 6 and 7, KazEOSat-1, PeruSat-1, Precursor Sentinel 5 and MetOp Second Generation weather satellites. Cheops weighs approximately 300 kg and is approximately a 1.5 m.

To build the satellite, a group of 24 companies from 11 European countries was selected, seven of these companies are Spanish. The challenges were huge, especially since the flight model had to be built and tested in just two years.

Airbus will use the pre-launch time to re-evaluate the spacecraft, load the latest version of the software, conduct simulations for the start-up phase of the launch phase, and refine the procedures for in-orbit commissioning. Airbus's involvement goes beyond the LEOP and IOC phases and official satellite delivery, providing support for satellite control from the ground and maintenance during the operational phase. The Operations and Support Center that will coordinate the main operations of the ground segment will be located at INTA (National Institute of Aerospace Technologies), near Madrid.

The Cheops mission will analyze, for at least three and a half years (duration of the project), the transit of exoplanets as they pass in front of their stars. It will operate in a synchronized orbit in the sun at an altitude of 700 km. This will provide stable temperatures and constant illumination of your solar panels, minimizing the possibility of scattered light reflections in the telescope. The satellite is on schedule for launch between October 15 and November 14, 2019, aboard a Soyuz launcher from the European Space Port in Kourou.

Cheops is a pioneering mission. The spacecraft data will be used to generate a list of the most promising exoplanets in terms of sustaining life as we know it. Plato and Ariel are the ESA missions that will deepen the study of exoplanets beyond the next decade.