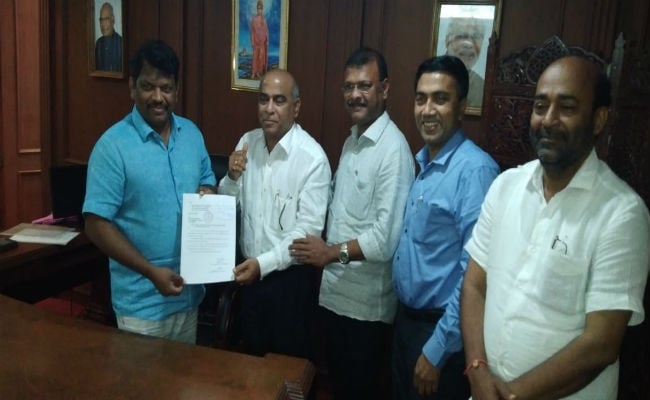 Two of the three MGP MLAs in Goa on Wednesday morning united their party's legislative wing with the BJP, which now has 14 lawmakers in the 36-member state assembly. Lawmakers Manohar Ajgaonkar and Dipak Pawaskar issued a letter to merge the party of the MGP legislature with the BJP to arbitrate the Goa Assembly chairman Michael Lobo at 1:45 a.m.

However, Sudin Dhavalikar, the third party Maharashtrawadi Gomantak (MLA), did not sign the letter.

While Mr. Ajgaonkar is Minister of Tourism, Mr. Dhavalikar is the Minister of Transport in the state government led by the BJP in Goa.

As two of the three MLAs have merged the legislative wing, they are saved from the invitation to the anti-defection law, which makes it obligatory for two-thirds of the force to agree to the merger.

Lawmakers broke away from the POP and formed a group, the MGP (two) on Tuesday. They have now merged the legislative unity with the BJP.

Mr. Lobo confirmed that he received the letter at 1:45 am from both MLAs to merge his legislature party with the BJP.

Mr. Dhavalikar's signature is not there in the letter, he said.

The midnight political drama increased the BJP's strength from 12 to 14 in the 36 House members, bringing them in line with the opposition Congress that has an equal number of MLAs in the House.

MGP is a partner of the BJP alliance in Goa since 2012.

Pawaskar said the resolution to separate from pop and create another faction was taken by him and Ajgaonkar at 5 pm Tuesday.

"After approving the resolution, we approached the chief minister, Pramod Sawant, with the letter, which instructed us to present it to President Michael Lobo," he told PTI.

The letter was finally delivered to Lobo at 1:45 on Wednesday, Pawaskar said.

The decision to split the party from the legislature and merge it with the BJP was taken "in the interest of the people," the MLA said.

"The people in my constituency wanted me to join the BJP. We also resigned ourselves to the fact that we could not take the MGP forward in the state," Pawaskar said.

He claimed he would secure a cabinet seat in the Cabinet led by Pramod Sawant.

The MGP is a BJP ally in the Sawant government with all three MLAs supporting it, along with lawmakers from the Goa Forward Party and Independents.

Sawant, who faced the floor test last week after the death of Prime Minister Manohar Parrikar, was backed by 20 MLAs against 15 of the opposition.

Speaking to the PTI, he on Tuesday claimed that one of his party's "was required to issue a letter" to the governor and the spokesman declaring authority over all legislative matters of the group.

Dipak Dhavalikar said that the central committee of the MGP will meet on Wednesday afternoon to define its future action plan, which, according to him, can decide the fate of the state government.

Congress reacted strongly to the merger.

"The BJP proved that it is a threat to all its allies," said Congressional spokesman in Goa Sunil Kawthankar. "This is a clear indication to all NDA partners across the country before the election of Lok knew that any partnership with BJP would be detrimental to the existence of their own party," he added.