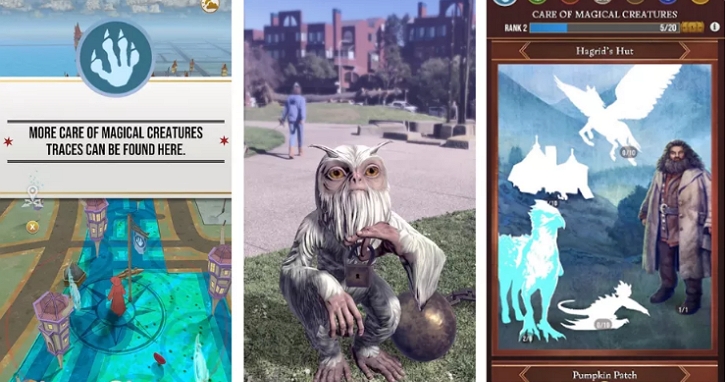 Because of the beta, the interface and appearance of the game's features may differ from the official version in the future, and may disappear when touched midway. However, the content of the game is almost ready to experiment, and there are many local media POs out of this game.

From the movie, this game is more like the Pokémon Go than you think. It is not in the world that it is not a pavilion, but a fortress of various magicians. You can explore different "Foundables" on the map. When the player eliminates these Foundables, they use different spells and spells, and consume magical energy. If you want to add them, you need to collect resources on the map.

After entering the opponent's fortress, you will play against the guards stationed in this fortress.

The way to fight is to cast spells through magical gestures.

If he fails, he will be beaten … and expelled.

In addition, when hunting for magical creatures, unlike Pokémon playing the Elf ball, the way you use it in the Magic League is to use a magic wand to subdue magical creatures. Before you can hunt for different creatures, you must first be on the screen. Draw a magical gesture and use your wand to hunt. (From this perspective, maybe you can develop the Devil Buster AR in the future?)

Harry Potter will also appear as a NPC game:

There are also games that interact with other players in this game. You can choose a career between magicians, aurors and teachers. Different careers will affect the player's magic. There is also the Magic Challenge, which allows you to join other players against magical creatures.

In addition, there are also college elements that join Harry Potter, and you too can become a member of Gelai.

Currently, the content of "Harry Potter: Wizarding League" is based on the Pokémon Go skeleton, which is derived from magic to capture magical creatures. While there are some different game rules as long as you have played Pokémon Go, you should be able to start soon. I believe that if the country is open in the future, it can reproduce the trend of Pokémon in the past when the streets and alleys will see a group of mages and trainers gathering to fight for magical creatures and treasures.