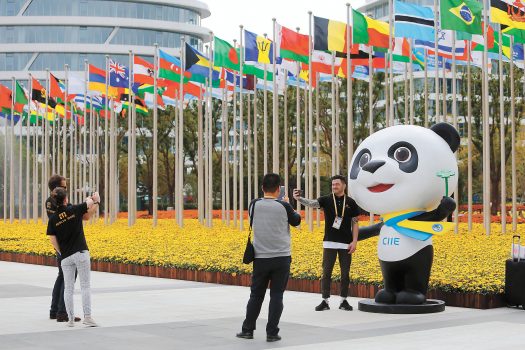 On the morning of the 5th, the first China International Imports Exhibition on the 6th ("Jibo Fair") opened in Shanghai on the morning of the 5th. Chinese President Xi Jinping presided over the opening ceremony and gave a speech. Xi Jinping said at the welcome banquet on the 4th day that this is not a general exhibition and an important move for China to open its market to the world. However, under the tense atmosphere of the Sino-US trade war, the outside world also noticed that senior officials from Europe and the United States were absent from the event, presenting a "cold and hot political" pattern.
As an international exhibition, the Expo was described by the official media as "the first large-scale national exhibition of the world with an imported theme". The Expo will be held in Shanghai on the 5th and will be divided into two exhibitions, with 82 countries participating in the National Pavilion, plus 12 host countries to set up exhibition halls and China will also create a national pavilion. There are also exhibitions of companies with seven exhibition areas, and more than 3,000 companies from 130 countries will participate.
Chinese President Xi Jinping and his wife arrived in Shanghai on the 4th and held a welcome evening banquet to welcome illustrious guests from around the world. Xinhua News Agency reported that Xi Jinping made a speech at the banquet, saying that the Expo is China's, and even more of the world.
This is not a general exposure, it is an important decision for China to promote a new round of high-level opening, it is an important initiative for China to open its market to the world.
Xi Jinping said that in the next six days, 172 countries, regions and international organizations from all five continents will show the world the achievements of development and the national image, and more than 3,600 companies from all over the world will also cooperate fully with domestic and foreign buyers. In order to pursue common development, guests will also conduct discussions and exchanges on important issues relating to the international economy, trade and global economic governance and will carry out ideological collisions. This will be an exciting event that will bring great results to friends from all over the world.
At the opening ceremony on the 5th, Xi Jinping will also give a speech and visit the exhibition. Since Xi Jinping announced the holding of the Expo last year, the official has always attached great importance to this event. Wang Bingnan, deputy minister of China's Ministry of Commerce, pointed out that this is an important move for the Chinese government to open its market and expand imports. China will provide important channels for companies willing to export to China and build an anchor platform for Chinese and foreign companies to conduct commercial and economic cooperation.
Imports of 24 trillion US dollars over the next 15 years
Wang Bingnan said China should import 24 trillion US dollars over the next 15 years, believing that the Expo will provide new opportunities for countries around the world to expand their exports to China. Regarding the protection of the intellectual property rights of foreign companies, Wang Bingnan pointed out that the Chinese government attaches great importance to it and will adopt a series of measures to protect legitimate rights and interests.
According to expert analysis, in the context of the impasse between the US and Chinese trade wars, China's initiative may ignore the United States, deepen trade ties with other countries, offset the negative impact of trade wars and increase bargaining with the United States.
However, what worries the outside world is that not only the political figures of the G7 (United States, Canada, Britain, France, Germany, Italy and Japan) are present, but politicians from major trading countries such as Korea South and Australia will not attend this year. The trade pattern between China and the West has gradually become the opposite.
The BBC quoted Hu Rong, an assistant professor at the Chinese University of Hong Kong, saying that for China, it should not remain "hard hit" with the United States, but should increase the competitiveness of its industry and develop domestic and non-US markets .
Although the United States did not send senior officials to participate, Wang Bingnan said that as the world's largest "global buying, global selling" platform, the Expo aroused a positive response among American companies. Currently, more than 180 American companies have signed up for the exhibition. The third country. Among the exhibitors, there are 500 top companies, such as Qualcomm, GE and Johnson & Johnson, and some will be led by corporate CEOs.