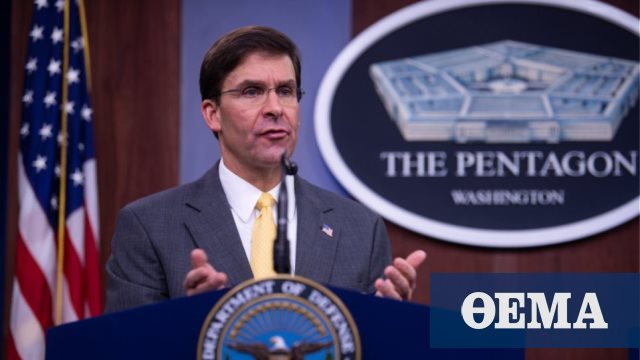 Tensions between the US and Turkey are rising dangerously, with the US side leaving no questions unanswered. Erdogan's statements about Washington's failure to make promises. Some hours later sign the memorandum of understanding between Russia and Turkey for a 150-hour truce, Washington-Ankara is again sharpening.

US Defense Secretary Mark Esper said Turkey appears to have committed war crimes in Syria and should be held responsible.

His statement comes as the Turkish military operation against the Kurdish forces in northeastern Syria caused a massive displacement, with reports of indiscriminate attacks on civilians.

"Those responsible must be held responsible, in many cases it will be the Turkish government. We cannot allow these things to happen," he added.

In a statement last week, US Secretary of Defense emphasized that Turkish President Recep Tayyip Erdogan "takes full responsibility" for the Turkish invasion of Syria, including "possible war crimes". He also vehemently denounced the "unacceptable" Turkish attack on Syria, estimating that it resulted in the "release of numerous dangerous prisoners" from members of the Islamic State.

"I'd say dozens now," he said at a congressional committee hearing when Democratic Senator Chris Counsey asked if he knew how many hard-core jihadist fighters had been released.

There are reports of a much larger number.

"The United States did not fully deliver on promises made last week in the interim ceasefire agreement in northeastern Syria," said Erdogan, according to Turkish television channel NTV.

"If we make compromises, we will pave the way for the terrorist organization," he added, leaving clear marks against the Kurds.