Strong condemnations against Tsakalotou in Thessaloniki 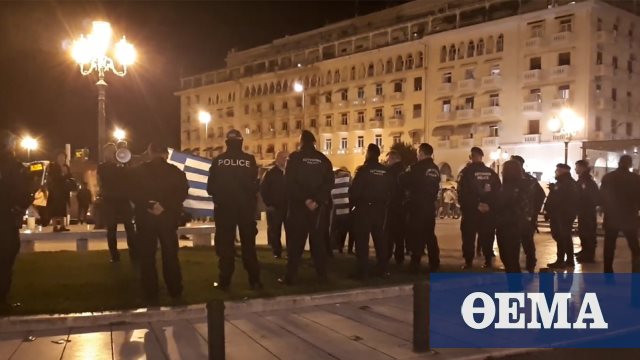 Strong condemnations reserved for Euclid Tsakalotos citizens who participated in protest in the Prespa Agreement.

The meeting happened in protest, from time to time President of the Minister of Finance in Thessaloniki, at an open event "for the economy, the far right and Europe" at Olympion.

Demonstrators called for slogans against the government and the Prespa Accord.

Like thestival.gr and wepost.gr, at some point the spirits were exacerbated as demonstrators saw mr. Tsakalotos and the other executives who participated in the event, they began to disapprove and shout "traitors".

The police forces that developed at that point prevented them from approaching.
Earlier, protesters tried to "snap" at the event.

Finance Minister Euclid Tsakalotos, however, tried to make an impressive impression with his Twitter post. With two photos, one from the hall of the event and one of the forces of the MAT that were outside, creating a ring to say that they were more in and less out:

Tonight at Olympion at the open event "For the economy, for the right and for Europe" @syrizathess had an empty room inside and a crowd of protesters outside. Here's the proof. pic.twitter.com/eMhqIKkQVg