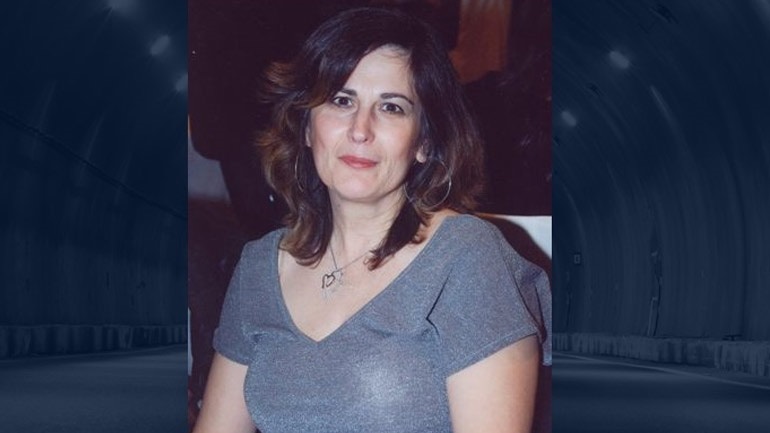 Vasso Koukounassouli – Silebista did not get lost on the road when she went for a walk, as everyone thought, but she was at her father's house.

A witness saw her leave the yard's yard and within a quarter of an hour, the earth opened and swallowed …

The light that the neighbors saw lit up was erased and all their personal things were found in the house. His cell phone ended in the same neighborhood and from 8 on Sunday night, March 10, the thriller began to show its end …

An inconvenience caused the studio to receive information slowly from a viewer who claimed to know the sign that hid the secret of the missing mother. The tunnel developer with the external investigations unit ran into the area indicated by the witness, but the research done at night did not state what he claimed.

The woman in the rain was not Vasso …

In the "Tunnel" came testimony from a troubled woman who looked like Vasso and was circulating as if lost in the rain in the area of ​​the Holy Trinity.

Two Larissa residents who had seen her, talked about a live connection to the show and gave details. Aggeliki Nikolouli appealed to viewers who were aware of this, to contact the call center to clarify if it is the missing person.

Just before the show was over, the mystery with the rainy woman wearing the same clothes as Vasso was clear. Witness communicated with the show and explained that he is a resident of Giannouli who is in trouble and is released as a lost in the area of ​​the Holy Trinity.

We saw the light on at home …

The program reporter returned to the neighborhood of his father's base and found a significant witness. On Sunday, March 10, between eight and five in the afternoon, at eight-four in the afternoon, she and her husband passed the car in front of the house and saw the light on the front door.

"We did not know that her grandmother had been transferred to a clinic, or that Mrs. Vasso had come from Lamia. We thought her son was lit because it was a Halloween day," he said.

"At the time you say he was lost, I saw you in the warehouse …"

Another resident of the neighborhood of Agios Charalambos was passing by chance on the carnival Sunday, from her father's house. She also noticed that the light in the front door was on. Then she saw a woman wearing a dark brown jacket, black pants and maybe talking on the phone. Vasso's brother, who was present, was surprised, as he had said in the tunnel, that when he crossed the house at eight-twenty, the light was off and she was naked.

Then Heracles Koukounassoulis unlocked one of his keys at the courtyard gates and headed for the front door, above which the light which the two witnesses saw lit. He showed the reporter who followed him that the switch was in the house.

"The little house where the witness was mentioned is a warehouse where we store the oil, I do not believe Baso needed anything from there, maybe he wanted to see if there was a key to the house, I usually hang inside an armchair for Vasso when he came from Lamia, "he said in exasperation.

The warehouse, the oil and the empty tank …

"The only thing I can imagine is that he went to the warehouse where the witness said he saw it, to leave the bimetallic we used to fill the oil with the stove we have at home," said Angeliki Nikolou, the brother of the missing mother. .

In a related question, the reporter replied that after that testimony, they checked the stove and found that it was full of liquid fuel.

The woman who cared for her missing mother before her children took her to a rehabilitation center spoke in the "tunnel." He said that on Thursday, March 7, when Vasos arrived at Larissa, she left the city and went to his village.

"I went to get my things, Vasso was already at home with her mother and I gave her the key to the house I used," he said. He said that in January, Vasso asked her to take her home so as not to bring her own, but she did not hang in the outer warehouse, as her brother used to do.

"Her husband told us what clothes he wore when he lost …"

Angeliki Nikolouli spoke to her missing bride, who, along with her husband, were the last people to see Vaso before disappearing.

On the morning of Sunday's Carnival, my husband and brother-in-law went to the clinic to see their mother and then they returned home and ate. Vase wore brown and black plaid trousers, gray high collar, straight boots and brown jackets. She called her phone as her girlfriend. At four o'clock in the afternoon, my husband took her to her parents for a break. I did not understand bothering about it … Before we left, we agreed to eat together at night, "he said.

The missing mother refused the invitation to stay at home when she was in Larissa and preferred to sleep at her father's house.

"That afternoon, I arranged to go to my sister's house early, as long as my husband came to drive me to Vasso and return home. At eight to five when I called her to be ready, the telephone she was off, "she said.

When the husband arrived, she waited in the car. She pushed the unlocked outer gate then, headed for the front door and rang the bell three times. Wait about four minutes while you continue to call your cell phone. He explained that at that moment the light from the front door was not on and that she had no reason to go to the outer warehouse of the house.

"Her cell phone was off in the next few hours, but we did not worry, and we assumed she might be with a girlfriend." In the morning, my husband left the house and was locked in. She came in and found everything perfectly. he had pulled on his plaid trousers and left them in a chair with a black coat on the bedside table were his glasses and everything in their place.The next day, her man came from Lamia and obviously saw what was missing in her bag , she told us that she was wearing a white blouse and black pants when she was lost. "

Cousin: I have nothing to gain …

When the Tunnel first dealt with the strange disappearance of the 59-year-old man, a witness went to a central point in Larissa, where the program's reporter was with the external investigations unit.

She told her that two months ago she found her missing at a property near her home, which is for sale. At that time, a relative of her, who disagreed with his decision to sell it, spoke to her in a very ugly way and forced the prospective buyer out.

The reporter went to this house and spoke first with the missing aunt. He said that Baos wanted to destroy the property belonging to her with her own son. She directed her son wrongly and claimed she had good relationships.

Her missing cousin who came to the neighborhood and overheard the conversation, said in the "Tunnel":

"This I had to say that I said the night of the show to Mrs. Nicolouli and then they called me to the police.There was not only one person interested in the property, it was more.I even told her to come from Lamia because the the last tenant of his property had left debts and planned to leave secretly without paying them.With him I was shouting … Then Vasso decided to sell it.A few people came four times and asked if they could divide them.I disagreed and said that was being sold as is. But no tension was created. "

He explained that he did not have to win any of the property, since Bazso had his own share.

"I saw you in the rain looking at the river …"

A witness who came into contact with the tunnel said that after disappearing around three o'clock in the afternoon, he was driving past the Alcazar bridge over the Pineios River.

Despite the rain, he noticed a man who was impressed by the bank. On a dirt road next to him, a white car was parked. This man looked worried as if he were looking for something. She was between 50 and 60 years old, bald with white hair.

"Unusual what happened to Vasso …"

In the neighborhood where Vasso was lost, they had a Halloween banquet since noon. Her friend Angeliki Stefoudi celebrated her and her family.

"All the doors were open.There was no way to pass Vassos and not talk to us.I was impressed that I did not see her that afternoon saying that I was lost.New neighbors did not know this because they had been missing for years.But none of the olds I asked , he saw her somewhere. I do not know … I wanted her to live … "he said in the" Tunnel ".

Pera Mahalas, as it is called the neighborhood that Vasos has grown, is in the heart of Larissa. It is a place with peaceful inhabitants and, as the neighbors said in the program, they face no crime. Those who know Bauso of a small child can not explain their sudden loss. "It's unprecedented what happened," said an old neighbor to his missing mother.

Another who is her best friend, she was shy when her husband called him and said she would declare his disappearance. "People here say if someone hit her and disappeared or is in a monastery. We all lose …" he said.