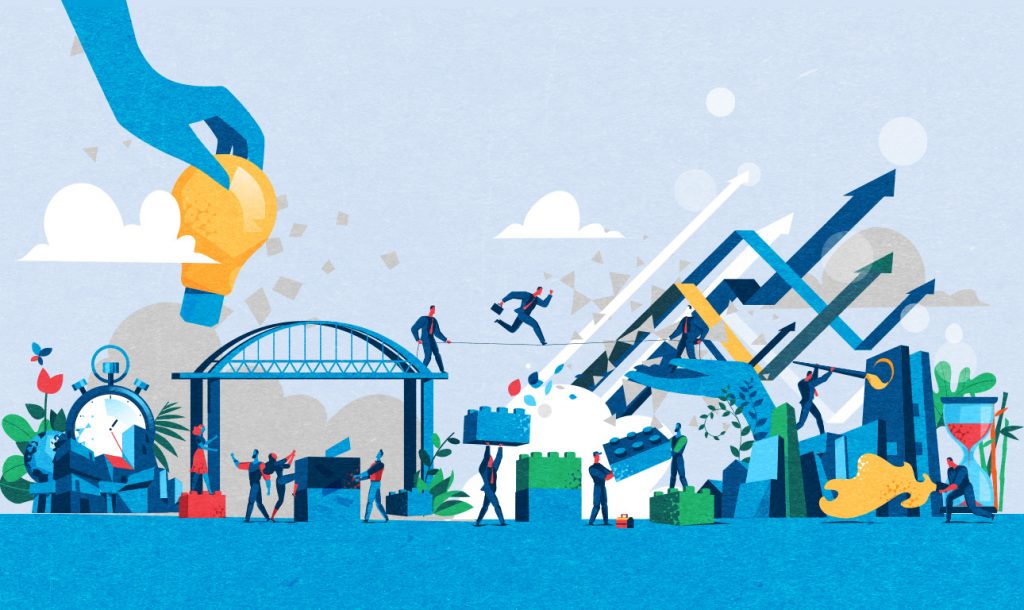 The markets enthusiastically welcomed the prospect of a sudden withdrawal of SYRIZA from power. This is evidenced by the boom of positive reports and positive performance of the Greek bonds.

Not because they're right. Markets have no ideological taboos or obsessions – white cat, black cat, as long as they get rats. And the markets have known for years that SYRIZA is something like Ran Tan's growth and investment plan.

The rally in the spreads

Greek bond yields fell sharply in the first week after the election. As spreads declined in four years, from June 2014 to August 2018, even more so in the week after the European elections. Indicatively:

It is very likely in the foreseeable future that the Greek State will be able to borrow in lower-cost markets than Italy. Maybe very soon.

So how can a eurozone country with a debt of 180% of GDP get a cheaper loan than another eurozone country with a debt of 130%? Because Greece's debt is higher, but potentially better than Italy's. This assessment takes into account, on the one hand, the qualitative characteristics of the debt (interest rates, duration of the loans) and the divergence of the two countries in the growth potential in the coming years. That is why, in 2013-2014, international organizations (the Commission, the IMF) predicted that Greece's debt could reach 120% in 2020 – less than 132% in Italy. Then, of course, Mr. Tsipras and Mr. Kammenos came to develop the country, canceling out all the accumulated potential of spring.

The reaction of the Athens Stock Exchange

For the PPC, five critical years were lost in SYRIZA. Now the market expects the next government to do what the exit avoided with criminal inactivity: it will deal with the company's troublesome problems. This expectation is reflected in the PPC share movement, which experienced extreme depreciation in recent years. Attention! Here expectations are analyzed and explained, no action is announced. In the sense that the arrival of a fire-fighting vehicle outside a burning building is certainly a positive fact, it does not provide information on the status and value of the building after extinction.

Banks are largely the mirror of the economy. The emphatic upward movement of bank stocks reflects expectations for the course of the economy, as reflected in the decline in spreads.

Markets, in their own way, express the conviction that the economy – along with the banks – will grow more dynamically, that investments, jobs and income will come.

But why do bank stocks go up? What is the concern about capital adequacy and red loans? Or the markets think that Kyriakos Mitsotakis is a miracle? No, sure!

Since September last year, we have written here that the main problem for the banks was not the missing funds or the red loans, but the lack of confidence in the outlook of the Greek economy. And in November, on the occasion of the Bank of Greece's red lending project and the Eurobank restructuring plan, we saw a bit of optimism. The government, of course, is obstructing. He has not yet promoted the Bank's plan for the relevant European institutions, perhaps because of the special fight with the Bank, but this will soon be a problem.

Unfortunately for the country and the economy, the SYRIZA government lost confidence in markets and investors as early as 2015 for a number of reasons. In addition, she continued steadily and methodically to undermine her credibility until the last hour. Undoubtedly, the governments of A. Tsipras have gained many points in the field of fiscal credibility. However, the balanced budget is a financial virtue, but it does not guarantee growth or confidence. Many countries of the former Eastern bloc were balanced in the budget and, at the same time, fell in growth for decades.

If we were to codify the reaction of the markets in a slogan today, it would be: SYRIZA is going away, confidence is coming. And the results are produced simply from the return of confidence.

For example, the Financial Stability Fund proposes a plan to solve the problem of red loans, but it has a high cost of financing because it is linked to the high cost of the loan by the Greek government. When the cost of the Treasury loan is reduced, banks are closer to acquiring another tool to cut red loans.

Even if lenders need new funds to properly manage the problematic loan portfolio, they will be much more profitable when the weather is good. An eloquent example is Banco Piraeus. According to the Bank of Greece and the SSM, 2014 needed new funds worth € 757 million, and easily scored more than double the purchases (€ 1,750 million) here. In contrast, in the second half of 2018, the need for capital support through a subordinated bond loan of 500 million euros proved to be impossible due to the bad weather.

Today we have closed for 8 years without banks, all three of them exclusively because of the 2015 adventure. We will not stay forever like this. "Banking return" 1, the transition from an economy without banks to a banking economy, the transition from an economy in which banks subtract liquidity to another where they add liquidity will significantly improve the country's investment scenario and growth potential. . This transition is now visible.

We are not, of course, talking about returning to the excesses of the pre-crisis. We're not talking about measurable credit expansion. The first goal is regularity, stability, stop shrinkage. In 2018, the flow of net lending from banks to the private sector was negative by € 2 billion. Less loans than repaid were awarded. In order to maintain credit neutral, ie maintain the private sector / GDP lending ratio, banks would have 6 billion more loans in 2018. And that would mean 10 billion euros per year more investment if we count the investment firms or households in housing.

Banks are just one example. The return of trust is a promising way to invest and develop on many levels in many ways. Therefore, despite the difficulties, strict supervision and high primary surpluses, the country has objective conditions to succeed in the coming years. The return of confidence and the credibility of the next government will play a catalytic role in this direction.

Until recently investors had serious doubts as to whether Greece could go beyond demagoguery and populism, with a different plan of counter-regulation and underdevelopment promoted by SYRIZA.

European elections have sent investors the message that Greece can overcome its evil. And the markets responded that they are ready to give Greece another chance.

If you want, of course, if you want, you can stay with the long-term pessimists. In addition, many wounds and dysfunctions remain the same as yesterday – only the demographic issue is enough to be a long-term pessimist. But now Greece is back at the beginning of a virtuous upward economic cycle, as in 2014. And this time, the stars of SYRIZA do not grow.

We will reach the end of this cycle, having made significant progress in terms of structural, institutional, difficult! But never before, in the years of the Transition, were there no more favorable conditions in society and a general awareness of the dysfunctions of our state. Never before has society required modernization.

Markets sent a message to KINAL, but probably not. The message read: "Due to special circumstances, over the next four years the Greek economy may do much better than demographic or structural dysfunctions and the country's institutional deficit will allow. likely to be recorded as the four-year economic recovery after the decade of prolonged decline. "

You, then, were guilty along with ND for the failure of the country and almost exclusively the cost of your salvation. Memorandums, heavy taxes, cuts needed to finance the budget and rationalize the Insurance Company were more costly for PASOK.

The very heavy measures of the second memorandum, which was a necessary prerequisite for the great debt regulation in 2012 and for the collection of funds that rebuilt the banking system in the great recapitalization of 2013, voted together with ND and PASOK.

But the drastic debt reduction, the country's return to investment grade, will be credited alone by the SW.

The investment desert, caused by the loss of confidence and the take-off of spreads, was mainly managed by PASOK. The reduction of spreads and the recovery of investments will be managed by the ND itself.

The recession caused by the collapse of the banking system and the shrinkage of the credit were both charged by PASOK. The devaluation of capital controls, the return of banks as a pillar of financing and growth of the Greek economy, the growth that the transition from an economy without banks to an economy with banks will bring will be credited by the ND itself.

The process of Hellenic exploration was initiated by G. Papandreou. The exploration of the Hellenic, the excavators in Hellenic, the growth that will bring the Greek will be credited by the own Kyriakos Mitsotakis.

Bill on Small PPC was brought by Yannis Maniatis from KINAL. The redemption and consolidation of the PPC will be credited by Kostis Hatzidakis or some other ND minister.

The fall was billed with PASOK. The increase, the recovery of the country and the economy will be credited exclusively by the DE.

An extortion of the presidential elections in 2009 and an unnecessary slogan and unprecedented "money there" gave K. Karamanlis the opportunity to escape his responsibilities. An "emblematic" suppression and an unrecognized "strategy" give PASOK the opportunity to escape the country's management during the recovery of the economy, giving Motsotakis self-sufficiency and glory.

I hear what I hear to justify the self-aggression of the curse at the starting point. But I do not understand how KINAL predicts its role the next day. Will it fight for lignites and the protection of the Hellenic forests? Will you promise a more dynamic negotiation for surplus children? Will you participate in the intimidation of investments in Halkidiki? Will Ms. Gennimata, come to Piraeus, support the protests against COSCO? Will he embrace the embarrassment with Mr. Lyberopoulos and every guild against tax, progress, and progress?

Or do you just have to stand in the opposition to change the past, to restore the injustice of history against you? Do you, avoiding responsibility today, become more persuasive about PASOK's responsibility and role in the salvation of the country?

One thing is sure, the country would gain with the consensus of the political forces in the next years, since it lost in the years that preceded the Samaritan-Venetian government because of the lack of consensus.

PS: In the summer of 2010, Evang. Venizelos to vote in the first memorandum of 180 deputies infuriated me. I took this as an expression of micro-partisan strategies, those that led the country into bankruptcy. A movement that threatened the future of the country if the necessary majority were not assured and were conducting elections, political crisis, etc.

With the ex post knowledge of the developments, one realizes that if the SW of Anthony Samaris was placed in time before his responsibilities, the country would have avoided much suffering and suffering. It was a proposal of responsibility that protected PASOK and the country in the long run.

1For the prospect of a recovery in the banking sector, you can see the video (from 1:34:50) of a relevant presentation on 4/16/1919, as well as download the pdf file that accompanies it here.