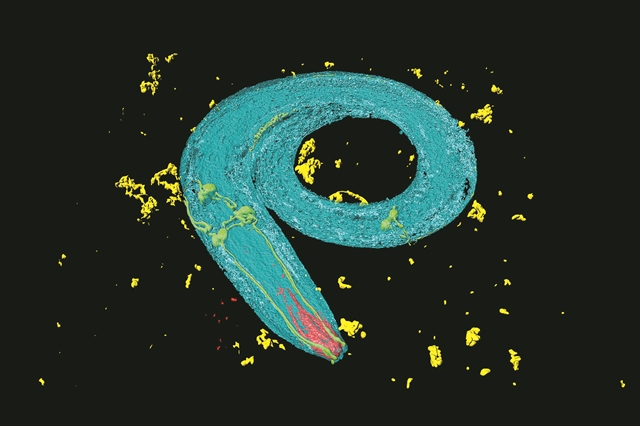 If time permits today, Sunday, November 18, 2018, a mission will begin at the Kennedy Space Center in Florida, USA, to the International Space Station (ISS). The mission is funded by the European Space Agency (ESA) and the corresponding US and Japan agencies, NASA and Japan Aerospace Exploration Agency, and will not be manned. However, all interested are invited to successfully complete this trip, which instead of astronauts transports tiny animals! Yes, you have read well: the current release, which has been planned in detail for almost a year, is being done to transfer certain strains of the nematode. Caenorhabditis elegans.

Worm out of atmosphere

Obviously you will wonder what job can have only one millimeter in space. Answer this and other questions we ask him Nektarios TavernarakisPresident of the Institute of Technology and Research (IES) and professor of the Faculty of Medicine of the University of Crete, whose research team cultivated and prepared space travelers properly. «This is a collaborative research coordinated by a British team in which we, as well as researchers from the USA and Japan, participate. Our goal is to study the effects on the neuromuscular system of long-term permanence in space. C. elegans is a well-studied experimental animal that is offered for this type of experimentation. The astronauts already at the Station will conduct a series of experiments and then the samples will travel back to Earth and the workshops from where they came to study more".

You may have noticed that when astronauts return to Earth after months of falling under gravity, they literally can not stand. So you understand the interest of space agencies in such a research program: they would like to protect astronauts from muscular atrophy now and then as long as the ambitious plans for a manned mission on Mars are implemented. But, as pointed out by Mr. Tavernarakis, "This research program is not just about astronauts and space travel. Our findings are expected to be explored for reasons of concern to all of us. Cosmic radiation does not only exist in space, it also reaches Earth and its effects can be very serious. We know that people on high-frequency transatlantic travel, people exposed to increased amounts of radioactivity due to work environments and living in cities with increased particle concentrations are at greater risk of being affected by neurodegenerative diseases. In addition, there may be no gravity conditions on Earth, but the study of the mechanisms of muscle atrophy will be very useful in many pathological situations. The organization tends not to keep what it does not use. Thus, sarcopenia, the loss of muscle tissue observed in astronauts, is also observed on the earth in paraplegic patients, but also in old age".

But how does the microscope relate to humans and what kind of experiments will be done in space to draw useful conclusions? «The molecular basis of sarcopenia, changes that occur when the muscle cell is atrophied, are common in humans and C. elegans"Said Mr. Tavernarakis and explained:"As for the experiments, they were actually made here in the laboratory. We prepare strains of transgenic nematodes that grow in space to give us answers to specific questions. For example, there are strains of animals that do not have specific genes. This will allow us to see how these genes are related to muscle atrophy, which one has a protective effect or the opposite. Correspondingly, we prepare strains that will be grown in the presence of pharmaceuticals. This will reveal whether some of the substances tested can protect against muscle atrophy or reduce its extent. This is a large collection of different nematode members we have already sent to the program coordinator in England and who, after collecting the samples from all the teams, sent them to the NSAA, which is also organizing the current launch. Note, however, that if the time is not good, the posting can be rolled over to one of the following days".

When astronauts receive precious cargo, they grow the different strains of the nematode according to the scientists' instructions. At regular intervals, they will receive and freeze on samples of minus 80 degrees Celsius that will be sent back to Earth in about a year (by the end of 2019). It is worth mentioning that for the freezing of samples, astronauts only have to expose them to the outer conditions of the space station, but to dispatch to the Earth will need liquid nitrogen to keep them frozen (which is absolutely necessary to avoid any changes due decomposition). It is impressive that special cans and oxygen delivery devices have been designed for the journey of samples to and from the International Space Station. In addition, in addition to the samples themselves, all the nutrients needed for their survival and all the experimentation tools will be shipped with them.

But what exactly will happen when the samples return to the laboratories where they started? Apparently, their study will be complete:An entire genome analysis of different strains will be performed to investigate any changes in DNA by exposure to cosmic rays. We will look for mutations and points where mutations are most common. However, epigenetic changes will be sought, changes that are not related to the DNA sequence itself, but which affect the way it is explored and, of course, the physiology of experimental animals will be studied to identify elements of neurodegeneration and muscle atrophy. All of this will give us the answers we are waiting for and that we could only receive through this mission."It is expected that all of the above will be completed by 2020, but it is certain that the results will feed into more research for many years, but it is clear at the moment that we will be attuned to each the mission …