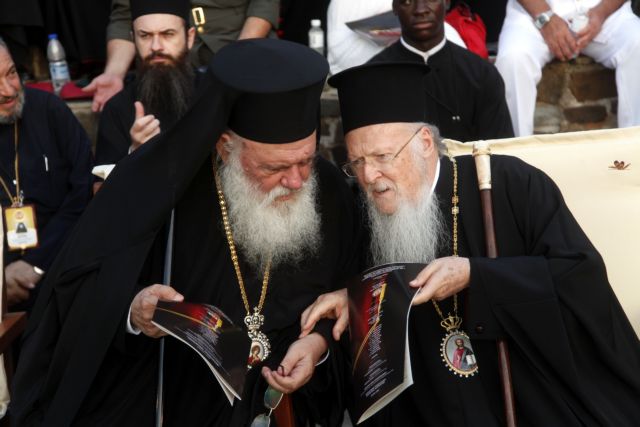 The next few days are critical of the possibility of a "holy war" between the Phanar and the Greek Church after the Tsipra-Ieronymos pre-agreement.

From the outset, albeit informally, the dissatisfaction of the Patriarchate of Constantinople was expressed by the archbishop's "self-confidence," who, as they argue in Fanari, secretly and without ever informing the patriarch Bartholomew, negotiated with the Greek government. and announced from Maximum an agreement that also touches the Patriarchate.

Moreover, the metropolitans and the priests in Crete and the Dodecanese are paid by the Greek state, but they belong to the Phanar. Neither can the Greek Church force the autonomous Churches to grant their property to the Development Fund.

The intense discomfort of the Ecumenical Patriarchate became even more evident after the information leaked that Friday, Bartolomeu met with the Greek Consul General in the city, Georgia Sultanopoulou, on Friday.

On both sides, there was no leakage of the issues discussed, but the meeting's situation, on Phanar's initiative, shows that the content of the discussion was definitely about developments after the Church's agreement with the Greek government.

And it can not be ruled out that there will be developments as the Consul General will have informed the government and will have received instructions.

In support of the crisis in relations between Fanarios and Athens is also the fact that on Saturday, 10/11, the Holy Provincial Synod of the Church of Crete is convened.

The meeting will take place at 12:30 p.m. and details of the Tsipra-Ieronymos bilateral agreement will be placed under the microscope in order to shape the attitude of the Church of Crete. There is, however, a reflection on the secret consultations and lack of information from the Archdiocese.

Well-known ecclesiastical states that the situation is marginal and reaching the extremes does not rule out a "schism" with the Patriarchate, but it will also trigger explosive situations in the Lasting Holy Synod.

It is worth noting that Bartholomew-Ieronymos relations have not been at the highest level for a long time.

However, the Holy Synod of the Hierarchy of the Church of Greece meets on Friday the 16th of this month to be informed by Archbishop Ieronymos about the agreement he announced with the Prime Minister regarding the salary of Cleris and ecclesiastical property.

Despite the fact that the archbishop had suggested that this meeting would take place in late November or early December, stormy events and chain reactions seemed to have led to the decision to accelerate the convening of the supreme organ of the Church of Greece, something In addition, it urges metropolitans publicly in recent days.

According to the announcement of the Holy Synod: "During the Hierarchy, the Archbishop of Athens and All Greece, Mr. Ieronymos will give a presentation on the subject:" Information on a proposal of the Greek Government on the subject of ecclesiastical property. " After the contribution, there will be a discussion on the subject. "

Therefore, the Tsipra-Ieronymos agreement can not be ruled out if ecclesiastical warfare takes on unpredictable dimensions.