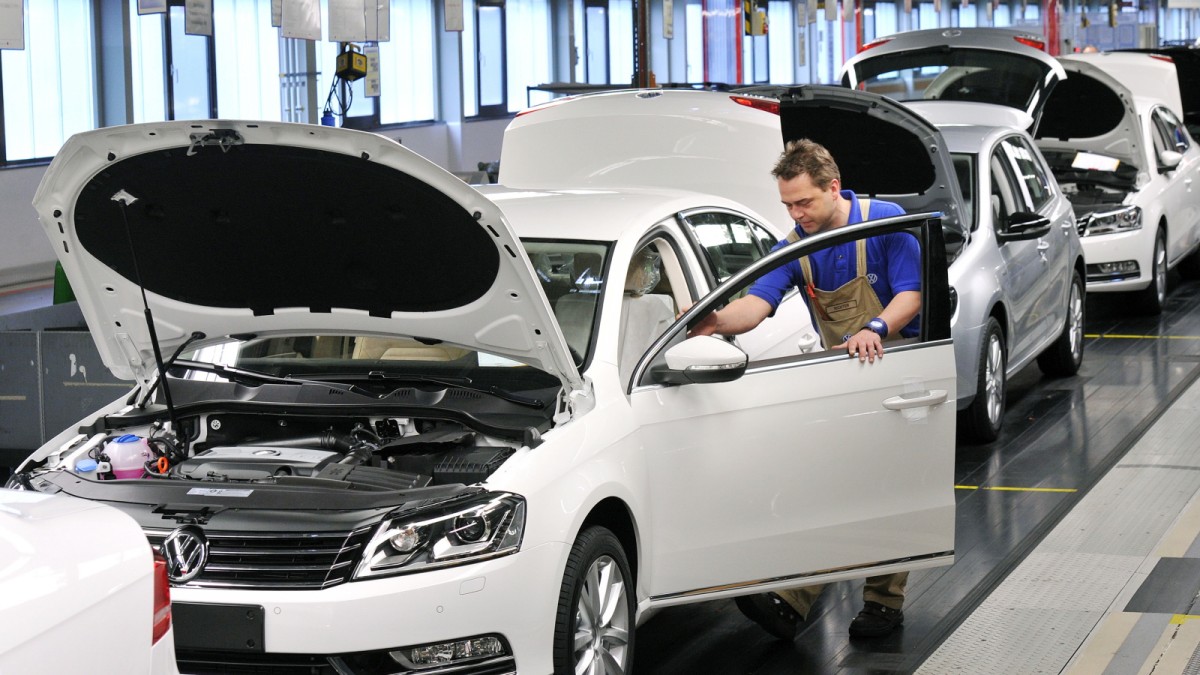 Zwickau – Volkswagen's head of training in Saxony does not hide the challenges: "Electromobility is not without danger," says Bernd Füsting, who works at VW Zwickau's plant in a major shift. He trains people to deal with heavy chains and avoid the fiercely extinguishable fires of batteries. It's a pioneering work because this factory must become Volkswagen's driving force for electric mobility – the first electric car factory ever made by the world's largest automaker. A mammoth task is the conversion during the operation, they say, until exactly one year when the first golf-sized cars leave the factory. And not just in terms of building robots and machines that are already there, which alone cost 1.2 billion euros.

Safety at work should be rethought. In the future, will no longer be about transmissions and fuel hoses, but HV, on high voltage. In cars, between the wheels, the batteries will be packed – voltage of 400 volts, deadly danger! In the warning symbols, he had to train people, Fusting says, and there, where it is allowed to play: blue, safe, twelve volts. Red, extremely dangerous, 400 volts. Many hundreds of band members will be sent through training in the coming weeks, also learning the right plug-in, so the cars really get together. Defibrillators are hung everywhere, if anything happens, and they practice withdrawing the victims from the car with a hook. Of course it's safe. It's just one of the new aspects VW will deal with in the future.

The group is looking to the future, or as Thomas Ulbrich, CEO of Electric Mobility, calls: "The electronic history begins, it's a new era as the first Beetle or the first Golf." The chapters are diverse, as can be seen this week: on Friday, VW's supervisory boards finally want to decide that the Emden and Hannover factories will also build electric cars in the future. There have been some discussions with workers' representatives and also with the state of Lower Saxony, which fears to be a co-owner of VW for jobs. In the so-called "planning round" of VW will be discussed on Friday morning, how much is still invested in gasoline and diesel. It will be less. Starting in 2025, one million electric car batteries will be sold annually, out of a total of ten million vehicles today.

You do not need to completely reinvent the auto industry; yet four wheels are attached to the chassis. But in Zwickau, the effort is clear. In addition, the bill is new: the ID, which they will build here now and has the trade name Neo, should cost as much as a diesel Golf, which they currently build here. But the sale price of approximately 25,000 euros will hardly get stuck in Volkswagen. Startup costs a lot of money. And above all, the cost margin of the battery, says Ulbrich: 40% of the value of the vehicle makes up this component, which consists of expensive chemicals and metals. That's the reason they are targeting their own battery cell production at the corporate headquarters, led by director of purchasing Stefan Sommer. Until then, they are using batteries that LG Chem and Samsung are manufacturing in Hungary and Poland for the Zwickau plant – supposedly not coal-fired electricity.

VW's plan for Saxony is clear: 100,000 electric cars from the Audi, Seat and Volkswagen brands will be manufactured in 2020, two years later, so they should be 330,000. It would be after the Tesla factory in California, the largest electric car factory in the world – for the customer to play. Because that is the great unknown in this prediction.

"We will take e-mobility out of the niche," says Ulbrich with conviction, and shows a slide in which the curves show a marked rise, at least in Europe and China. There, politicians will soon punish manufacturers who continue to rely only on combustion engines.

If production in Zwickau "jokes" as they say on VW's onomatopoeia, with English pronunciation, more and more other factories will follow the same path, in Germany, but also in the USA. In addition, there are the works of electric cars of sister companies. Porsche, for example, is building a brand new factory for a battery-powered electric sports car in Stuttgart-Feuerbach. From the end of 2019 for the e-model called Taycan will be delivered. In addition, more and more the old engine plants will receive new tasks from then on; There will be significantly fewer jobs in these factories: an electric motor is only one tenth as complex as a diesel.

At the same time, more and more machines are entering the works. Zwickau also shows that: Electromobility is accompanied by a new level of automation. There will be 1700 robots in Zwickau when the two production lines are completed. But there still should not be major job cuts. In 2025, job security will be enforced. How's it going together? The 7700 people should work together with their metal colleagues. Very large robots are now available, with suction cups to lift the body and small, only parts. This should reduce the construction time of a car by a fifth; 1,500 electric cars per day should come out of the aisles here, instead of 1350 cars with diesel or gasoline engines.

Not everyone in Zwickau is convinced that this is the right way. And this is also a training point: self-driving and therefore experience of electric mobility. Motivations and a change of mentality are the conversations of managers. An advertising slogan they created, which is to help: "The new Six" with E. screw back while workers in VW-Kittel combustion engines in the Gulf. Still.