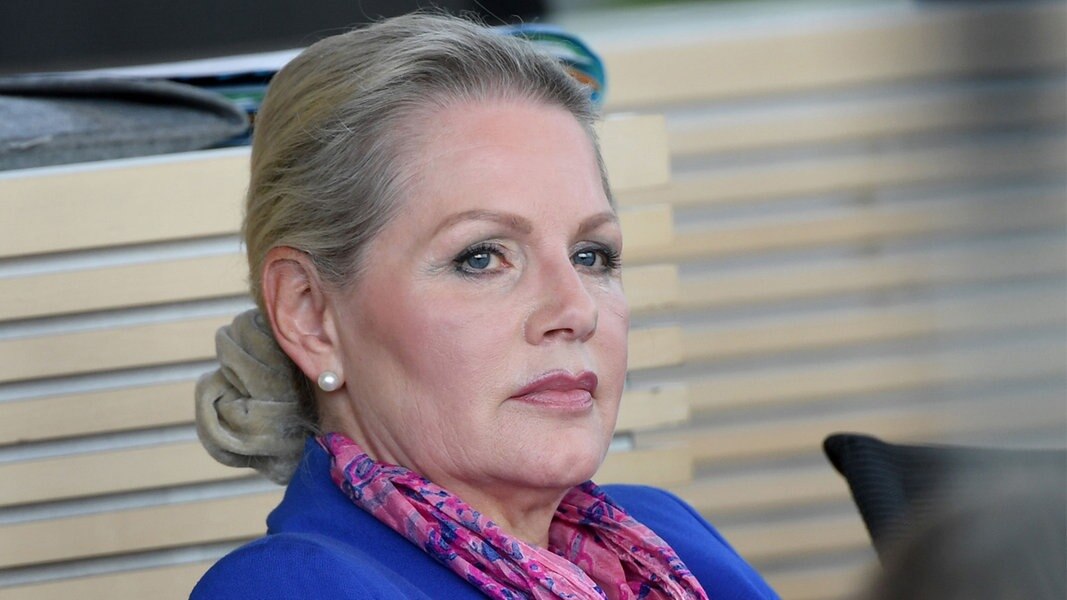 
Former AfD MP Doris von Sayn-Wittgenstein is said to resign from her parliamentary mandate because of a hateful video message.

Schleswig-Holstein Landtag President Klaus Schlie (CDU) has asked former Doris von Sayn-Wittgenstein, who has not joined AFD, to immediately resign her parliamentary term. The reason is the November 5th Facebook video titled "When are the left green fields coming?" The contribution must be reviewed criminally, Schlie said.

"It is unbearable and requires a criminal analysis that Schleswig-Holstein Landtag member Doris of Sayn-Wittgenstein reveals on Facebook video with nasty bait, confusing conspiracy theories and criminally relevant allegations as right-wing extremist," Schlie said. Even more clearly, one cannot be left out of the democratic spectrum. "I urge members to resign their mandate with immediate effect."

The mandate cannot be withdrawn

Also from Schleswig-Holstein Interior Minister Hans-Joachim Grote (CDU) receives criticism: "This woman does not belong to parliament," Grote said on Saturday. It was correct that Landtag Schlie's president asked them to resign immediately. "I find it alarming that she calls herself a representative of the people; if she acts like that, I don't think people think so," Grote said.

On the brink of the CDU state convention in Neumünster on Saturday, Schlie said, it is not possible for Sayn-Wittgenstein to withdraw his mandate: "I have no legal option." To his knowledge, there has never been a case in the history of the Federal Republic where a deputy's term of office was withdrawn.

Sayn-Wittgenstein told the German Press Agency about the allegations against them, "the Landtag President's reaction, the allegations in my video." The CDU politician damaged his office and "should therefore resign."

Stegner: Must Have Consequences

SPD Federal Vice President Ralf Stegner has already filed criminal charges for sedition against Von Sayn-Wittgenstein. "If a right-wing party – and Mrs. von Sayn-Wittgenstein was elected president of AfD Schleswig-Holstein – denounced the Democrats as new Nazis and covered with such tirades, that must have consequences.

Von Sayn-Wittgenstein accuses the state in his five-minute speech calling for the denunciation of citizens of constitutional protection: ".. When will the first green-red-black re-education camps arrive, when will the first Nazi concentration camps arrive? "She goes on to explain," When will parental authority, a driver's license, or whatever be removed? " These new Nazis do not even inhibit the subjugation of a true anti-fascist man with Hitler's greeting as a danger to the right. most of these high profile public crimes are committed under the wrong banner. "

Von Sayn-Wittgenstein had been expelled from AfD because of detrimental party behavior. In 2014, she campaigned for a club that has been on the so-called AfD mismatch list since 2015 and was classified as a right-wing extremist by the Thuringian office for constitution protection.

Stegner: "Hetztiraden must have consequences"

If Sayn Wittgenstein's Doris democratizes as new Nazis insulted and covered with Hetztiraden, that must have consequences, demands SPD Deputy Federal Ralf Stegner.

Former AfD state president Doris von Sayn-Wittgenstein draws consequences from the exclusion of his party. She stated that she would no longer work on the state executive board until further notice.
more

Doris von Sayn-Wittgenstein was expelled from AfD for alleged contacts with right-wing extremists. So she was no longer the president of the country, says the party. The 64-year-old man contradicts.
more

Doris von Sayn-Wittgenstein does not want to accept his exclusion from AfD. She wants to remain president of the country, the 64-year-old said in an interview with NDR Schleswig-Holstein.
more

This topic in the program: