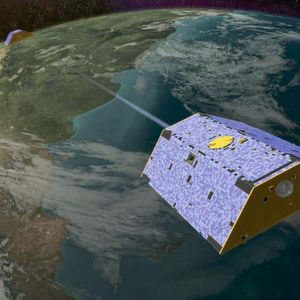 Glaciers are melting, freshwater resources are shrinking, sea level is rising – many effects of climate change are causing mass redistribution on Earth. These changes were recorded by the pair of satellites "Grace" for 15 years by measuring gravity. With the obtained data can, e. For the first time, the actual ice mass loss at the poles was measured rather than estimated. This and other results of the Grace mission can be read in the following article.

Bremerhaven – On March 17, 2002, the German-American satellite pair "Grace" (Gravity Recovery and Climate Experiment) began mapping Earth's global gravity field with the same accuracy as ever. The mission finally lasted a good fifteen years – more than three times as long as expected. When the two satellites burned into Earth's atmosphere in late 2017 and early 2018, they recorded Earth's gravitational field and its changes over time.

In a review, researchers have now featured highlights in the field of climate research, which are based on Grace's observations. Among the participating scientists are Frank Flechtner, Christoph Reigber, Christoph Dahle and Henryk Dobslaw of the German Center for Geoscience Research Helmholtz Center Potsdam GFZ and Ingo Sasgen of the Helmholtz Center of the Alfred Wegener Institute for Polar and Marine Research (AWI).

So much ice is lost to Antarctica

Grace produced the first direct measurement of the loss of ice sheets from ice sheets and glaciers. Previously, it was only possible to estimate the masses and their changes using indirect methods. Already in the first two years of the mission, it was possible to observe clear signs of loss of ice mass in Greenland and Antarctica.

The data suggest that 60 percent of Greenland's mass loss is due to increased thawing due to higher temperatures, while 40 percent can be attributed to ice movements. According to data from Grace, between April 2002 and June 2017, Greenland lost about 260 billion tonnes of ice per year. With this amount of Lake Constance, the lake could be filled about five and a half times. In Antarctica, about 140 billion tons of ice – about three lakes – have been lost. In addition to long-term trends, data from the gravitational field also provide evidence of the direct effects of global weather phenomena, such as "El Niño", on ice sheets and glaciers around the world.

One of the most influential contributions of the Grace mission is the unveiling of the changing freshwater landscape of Earth. These changes have a profound impact on the safety of water and food supplies, and thus on people. The trends revealed by Grace point to increased water storage at high and low latitudes, while storage at medium latitudes is declining. Although satellite records are relatively short, this observation of far-reaching changes in the global water cycle has been an important early confirmation of the changes anticipated by climate models for the twenty-first century.

Grace data also helps to better understand and evaluate sea level rise, as the storage of fresh water on land is linked to sea level levels through various mechanisms. The results confirm the over-abstraction of groundwater from individual aquifers around the world. The Earth's storage data also contributed to the review and improvement of various climate models.

In this century, sea level rise may accelerate to 10 millimeters per year – a figure never seen in the last 5,000 years, and a deep and direct result of a warmer climate, as highlighted by researchers involved in satellite data analysis. Although there have been high-precision sea level measurements since the early 1990s, they show only the absolute change in sea surface altitude and not how this increase is composed. In the 25 years between 1993 and 2017, sea level rose annually by an average of 3.1 millimeters.

The climate dossier LABORATORY PROMISE
In our climate research dossier you will find other research projects and current climate-related results.

In order to find out how different factors, such as thermal expansion of water, melting ice and land inflow, affect sea level, we need to study the mass distribution of water. Using Grace, it can be concluded that 2.5 millimeters of the annual sea level rise of 3.8 millimeters between 2005 and 2017 are due to the influx of water or other mass and 1.1 millimeters to the thermal expansion of the water. Deciphering this composition is important to predict sea level rise.

The data for free provide an upper bound on ocean mass variation and, indirectly, one of Earth's energy balances, which is a fundamental global measure of climate change. It has been shown that most of the heat released by rising temperatures remains in the upper 2000 meters of the oceans, which are the most important source of climate change. Grace also helps to better understand the dynamics and influence of ocean currents and to refine the corresponding models, especially for the Arctic Ocean. Overall, satellite mission data provide deeper insights into climate change and make a valuable contribution to climate research.