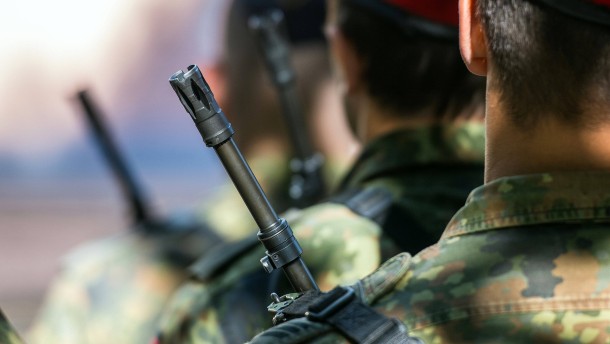 VMany Bundeswehr soldiers openly espouse a right-wing approach in social media, according to information from the ARD. This results from a set of data with hundreds of examples, which an informant, apparently even a Bundeswehr member, collected and who were present at the ARD capital studio. In some, the legitimacy of the Federal Republic is questioned.

Man's claims were not taken seriously by his superiors. He had sent his collection, containing posts from dozens of Facebook and Instagram profiles as well as closed groups, to the Military Protection Service (MAD) and to the Bundestag Parliamentary Control Panel.

Many of the far-right statements, jokes, slogans or photos are in the legal area, according to the report. They are not criminally relevant and can not be punished for violating the military disciplinary code. But again, the fundamental question arises: what is the size of the Bundeswehr problem with rights.

A closer investigation therefore demanded the Wehrbeauftragte from the German federal daily Hans Peter Bartels. "What does not exist, but what can be a suggestion, is a study on recruitment patterns," the report quotes the SPD politician. For all of society there are these figures, but not for the Bundeswehr. According to the ARD, Bartels asked if anyone could be afraid of the results.

The case of Franco A.

Right-wing extremism in the Bundeswehr has been increasingly discussed since Lieutenant General Franco A. was arrested in April 2017. It is said that he tried to get a gun from a hideout at the Vienna airport. The accusation at the time was that A. had prepared attacks against politicians of a "nationalistic attitude." In addition, he had acquired the identity of a Syrian refugee in order to direct suspicion to him and thus reinforce xenophobic resentment.

In 2017, the arrest warrant for A. had been lifted, he is outlawed, but suspended from duty. In 2018, the Higher Regional Court of Frankfurt am Main ruled that there was not sufficient suspicion for the preparation of a serious crime. If and when it comes to a case against A. is open.

Defense Minister Ursula von der Leyen had spoken after the arrest of a "housing problem" in the Bundeswehr, which many resented. Since July 2017, MAD has carried out a security check on all Bundeswehr candidates. Several people said they had been denied access to the Bundeswehr after the investigations because of a historical extremist.

According to the ARD, however, experts doubt that the Bundeswehr has few candidates if the suitability of the character is properly examined.

The soldiers 'act awaits the soldiers' active entry into constitutional values. Paragraph 8 says: "The soldier must recognize the liberal basic democratic order in the sense of the basic law and defend its preservation for all its behavior."