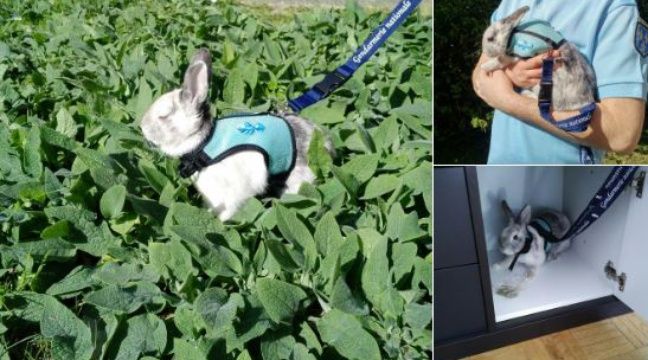 Cats used as lie detector? "These cats have the ability to detect stress, perspiration … from our custody," the Gendarmerie du Rhone told Twitter on Monday. Do not worry, it's obviously an April 1 joke (the cat in the photo belongs to a police officer and did not mistreat the man in front of him). "It's a small nod to our dog teams," smiles captain Nadia Mostefa, chief of communications for the gendarmerie's region.
Auvergne-Rhône-Alpes.

The Gendarmerie has innovated and experimented for several weeks with the use of chat as an "emotion detector" and, therefore, of lies.
These felines have the ability to detect stress, perspiration … from our custody. Info ➡️ https://t.co/MgOd1iDMd6 pic.twitter.com/0zJS3hSWBp

Spreading jokes on social networks is a good way to "build an Internet connection," showing "that under the uniforms, there are men and women who have humor," she explains. 20 minutes. Local police officers have broken their minds to find "original" and "somewhat credible" ideas. Last year, they tried to believe that the eagles flew across the highways to identify motorists committing crimes!

#INNOVATION : Discover the eagles ? @Gendarmerie ! Future loyal companions of our motorcyclists, the eagles will allow you to identify, at best, suspicious behavior and the perpetrators! (I.e.
Https://t.co/Qra3UnMk36
Case to follow! #golfclubssale pic.twitter.com/t3wKJEczYQ

In several departments, the gendarmes also played the traditional April 1 fraud game. In the Loire, those of Saint-Etienne took the pose in front of the Geoffroy-Guichard stadium with a "new uniform" after they changed their traditional blue polo shirt … for a green, of course! As for the Ardeche gendarmes, they announced the establishment of "pony patrols" this summer. "Rustic and agile, they will allow police officers to follow the steep paths of the department."

Pay close attention to the specificities of the territories, #gendarmerie ? citizens' concerns are the #PSQ.
The gendarmerie of the #Loire goes further and adopts a new uniform closer to the identity of the @LoirePresse
Pride of being even more #Highlights. pic.twitter.com/Seba5o5vfg

In order to improve contact and surveillance, the gendarmerie of the Ardèche will mount pony patrols from this summer. (I.e.

Rustic and agile, they will allow police officers to follow the department's steep path.# NotreEngagementVotreSecurity pic.twitter.com/uva0N0Vycz

In Essonne, the gendarmes presented the "group of rabbit investigations", composed of rodents specially trained to detect the drug "where dogs can not go". (Accuracy: according to the
Colonel Karine Lejeune, Essonne's commanding group, the animal in the photo is called "Pimpin". That's right, you know it all.) Rabbits with impressive "olfactory and auditory qualities" also make up the ranks of the "police brigades" of the national police on April 1.

[LA POLICE ÉVOLUE] Rabbits are part of the #police !
Olfactory qualities, auditory, agility … Rabbits are precious companions in our missions.#LaPoliceRecrute Your rabbit is motivated to join one of our leporífilas brigades? Send us your application! pic.twitter.com/CmJyrQQR55

Experiment # in #Essonne of the first group of#Investigations Lapinesco ? (GIL). Small size, the animal can detect the # damn it where dogs can not go. In case of success ?, implementation in 2020 in all groups of @Gendarmerie. pic.twitter.com/OStkWyuxW4

Finally, in Savoie, the police offer Internet users a "free trial" on the quality of their narcotics. Those who still decide to go to a police station with a ball of shit or a dose of cocaine can then be accommodated "on the spot" by agents who undertake to present their "Moogly" dog. Who said the police did not like to laugh?