Home / france / She saw her breast volume increase in 9 months

She saw her breast volume increase in 9 months 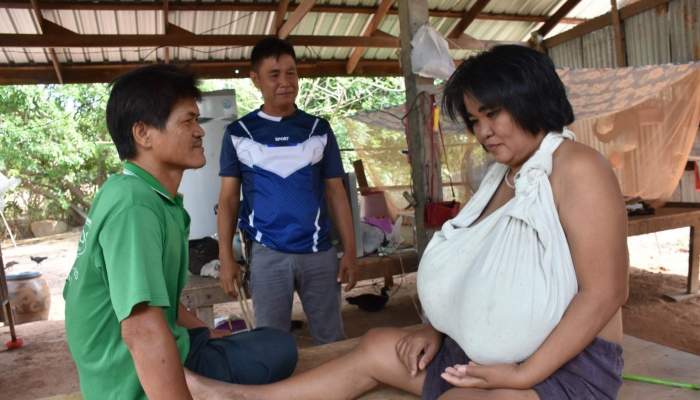 welcome
/ Society / News Company / Performing a rare disease, this woman has seen her breast enlargement in volume since 9 months

She does not recognize herself anymore. It's been nine months since a Thai woman saw her chest swell every day. Since then, she suffers from severe pain in the neck, shoulders and back. It seems she has a rare case of gigantomastia.

Lam Phrai Si Nuan is a Thai woman of 46 years. While she lived a more or less quiet life with her husband, her daily life turned upside down a few months ago. And for good reason, her body makes her suffer. It is more particularly of your chest that weighs several pounds today. It is a very debilitating evil that causes significant changes, since this woman is now forced to use crutches. To support the weight of the chest, she has to tie a tissue around the neck. This causes significant pain in the spine, neck and shoulders.

What Lam Phrai Si Nuan lives is not new. It all started three years ago, reports the Daily Mail, using information from the local Phitsanulokhotnews website. It was then that the woman noticed a change in the chest: her breasts were larger than normal. But nothing serious until the last 9 months when they became uncomfortable and disabling. Also, they did not grow at the same time. The website Why doctor reveals that it is initially the left breast that has grown uncontrollably.

According to doctors at the Phutthachinarat hospital who diagnosed her, the blistering growth of her breasts is not caused by a tumor. It is a rare but mild disease called gigantomastie. She "It consists of excessive growth of the mammary glands. It is usually due to pregnancy"we can read on the Futura Health. "Its incidence would be around one case per 100,000 births. The onset occurs in two-thirds of cases in the first trimester of pregnancy. In the absence of treatment, the increase lasts until delivery and incomplete regression is performed postpartum. This manifestation is undoubtedly due to a hormonal imbalance, even if its exact cause remains uncertain.

However, there is a way to Lam Phrai Si Nuan regain the size of your chest and at the same time, your previous life, do a breast reduction. But currently unemployed, she and her husband can not afford to finance the operation. The couple hopes that Internet users and donations from those affected by their story will help pay for intervention costs.

See also: This dancer lives with a rare disease