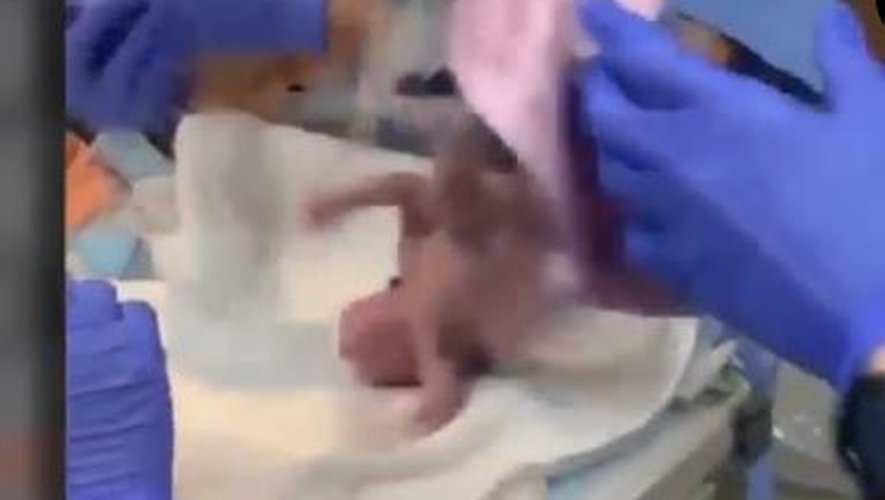 more
A young American couple had the fear of their life on the day of the birth of their two twins. A few seconds after birth, the medical team dropped one of their girls on their heads.

The events occurred on February 14, Valentine's Day. A blessed day for Monique and Derrick Rodgers. Three years after Derrick asked for Monique's hand, the girl gives birth to the Regional Medical Center in Chandler, Arizona, for two small premature twins: Morgan and Madison. All goes well until everything shakes in a few seconds.

Under Derrick's affectionate gaze, which is filming the delivery of his wife, it is little Madison pointing the tip of her nose first, followed a few seconds later by little Morgan. A little girl who weighs less than five pounds. While a medical staff member holds the baby, Morgan slides his hands and falls to the table, headfirst. The team picks up the baby in extremis before it falls to the ground.

"It made me angry," his father told ABC television. "I had the impression that it was treated like a bag of potatoes," adds the mother. "I went to see one of the doctors after childbirth, he did not care, so I showed the video and he had nothing to say after that," he says. Five days after his birth, Morgan undergoes ultrasonography of the brain, but the results of this examination are not communicated to the parents.

However, the parents, very shocked by the incident, remain silent. Until he finally receives ten days ago the results of this ultrasound. The diagnosis is enough to scare them: Morgan suffers from stage 1 on Morgan's left brain. Is this problem due to the baby falling on the head on the day of delivery?

Monique Rodgers then decides to post on Facebook the video of her delivery by her husband, which becomes viral in a few hours. What finally triggers a hospital response: "Due to patient privacy laws and the family's request not to disclose information, we can not comment specifically on this case. The safety of our patients and their families is always our primary concern. The medical team at Dignity Health Chandler Regional Medical Center takes this issue very seriously and strives to conduct a thorough review, "the hospital said in a statement.

An answer that is far from satisfying parents, who are waiting for excuses, but especially of explanations to know if the trauma suffered by their little Morgan will have consequences in its development.