In Hellfest, the Death Metal Eagles paid tribute to the victims of the Bataclan 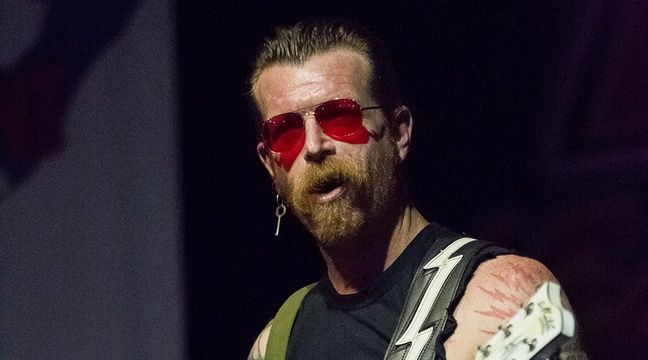 For his return to a French scene, three years after a show at Olympia, Jesse Hughes, leader of the Death Metal Eagles, wore a badge from the association "Life for Paris" in honor of
to the victims of the attacks of November 13, 2015,
Saturday at Hellfest.

You do not disappoint us … "The emotion was visible, as Jesse Hughes, finally taking off his glasses in the middle of the show, addressed the audience. Smiling grateful for the warm applause his group was mustering, the now-musty leader of the EODM repeatedly placed his hand on his heart and the famous "Life for Paris" badge hanging from his left lung. of his black T-shirt, sometimes looking down in a particular direction.

That where twenty good members of the association set up to support the victims of the jihadist attacks of November 13, 2015, who made 131 deaths including 90 from Bataclan where the Eagles of Death Metal performed in concert that night were posted.

The presence of the American group in one of the two main stages of the Hellfest, around 17.30, had some symbolic value. It should be said that Jesse Hughes was until then persona non grata in the French festivals after his controversial declarations denouncing the lack of security of Bataclan.

As a result, after giving a concert in honor of the victims in February 2016, his band was deprogrammed from the Rock en Seine and Cabaret Vert festivals the following summer. Since then, Jesse Hughes and his band, somewhat reworked, were not seen again in a French scene.

In front of the Hellfest audience, in number, the EODM honored its reputation as an energetic, electric and festive band. In three quarters of an hour, marked by a set full of comings and goings, they visibly regained the pleasure of playing on French soil that had painfully fainted four years earlier.