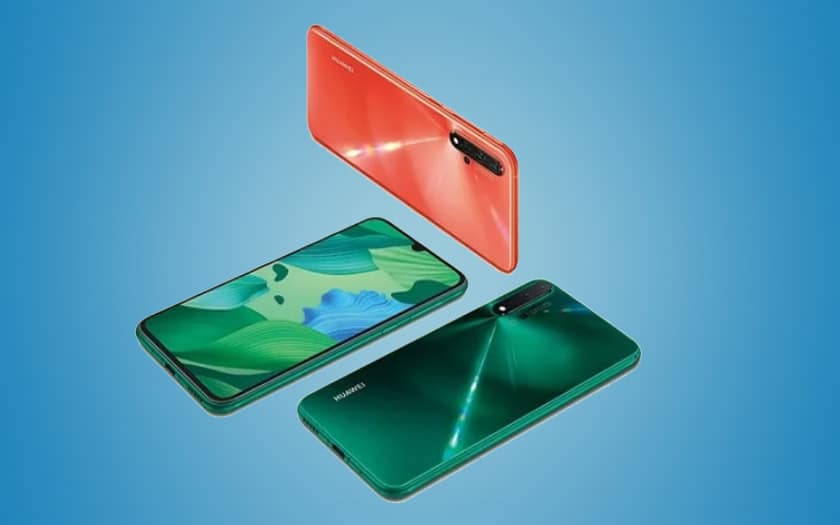 Huawei Nova 5, Nova 5 Pro and Nova 5i were formalized in China. Smartphones navigating between the top of the mid-range and the bottom of the high-end. One of the main attractions of this presentation was the introduction of the new SoC Kirin 810 recorded in 7nm that equips the Nova 5.

Huawei has launched three new smartphones from Nova on June 21, 2019 in China. Three phones that cover the spectrum of the mid-range, reaching the top of the range for the New 5 Pro. Find below the characteristics of the devices.

The Huawei Nova 5 Pro is equipped with 6.39 inch OLED screen with a resolution of 2340 x 1080 pixels and a notch in the shape of a drop of water. The fingerprint reader is located under the slab of the phone. He embarks on SoC Kirin 980, the best system-on-chip brand, which is already found in the P30 and Mate 20 series. It is coupled to 8 GB of RAM and up to 256 GB of storage space, expandable via microSD.

The autonomy is entrusted to a compatible 3500 mAh battery 40W Fast Charge which promises 0 to 85% in just 30 minutes. Side of the photo, we are entitled to a quadruple sensor. The main module, a 48-megapixel Sony IMX586, is paired with a super-wide 16-megapixel lens, a 2-megapixel depth sensor and a 2-megapixel macro lens. At the front, a 32 MP camera and an f / 2.0 aperture support selfies.

The Nova 5 is very close to the Pro model. It has the same design and both smartphones share many features. The main difference is in the SoC: the Nova 5 runs with the new Kirin 810 introduced for the occasion. This is the second Huawei SoC to be recorded at 7nm with the Kirin 980. RAM and internal variants are smaller, but for the rest we are dealing with a device similar to the Nova 5 Pro.

The most accessible model in the series is, however, very different from his two older siblings. It is contented with a 6.4-inch perforated LCD screen, which houses the 24MP front-end photographic sensor. Since we are talking about photography, let's mention its four-way sensor, which is inferior in quality to Nova 5 and Nova 5 Pro. The proposal here is a primary 24-megapixel sensor, a 16-megapixel ultra-wide depth of 2 megapixels and a ToF sensor.

The Nova 5i, however, stands out in the issue of autonomy, with a 4000 mAh battery. However, it only supports a 10W recharge. The fingerprint reader is positioned on the back of your smartphone. As for the whole series, the EMUI 9 overlay based on Android 9 Pie is in the game.

Please note that the information below applies only to China, prices will necessarily be higher in Europe if smartphones are marketed there.

The Huawei Nova 5 Pro comes in Dilema Forest, Purple Midsummer, Coral Orange and Bright Black. Pre-orders begin today for an official launch on June 28. The price is between EUR 385 and EUR 488 according to the variant.

Nova 5 is entitled to the same colors except Coral Orange. It is proposed to 360 euros. Orders from July 13 to 20 of the same month, date of its launch.

Finally, the mid-range Nova 5i comes in Crush Blue, Crush Red and Midnight Black on the same dates as the Nova 5 Pro. It offers between 260GB to 6GB RAM and 280GB to 8GB (128GB of storage space for both).