Germany and France challenge US hyper-power 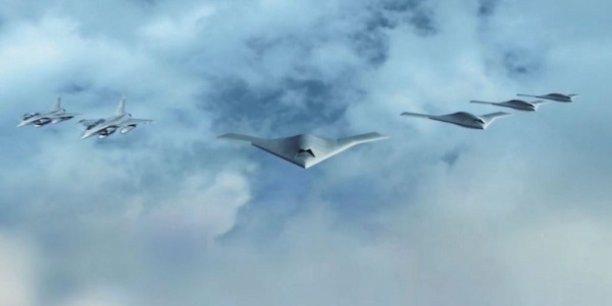 Will the Future Air Combat System (SCAF) be the star of the 53rd Paris Air Show? Clearly, France and Germany, on the one hand, Dassault Aviation and Airbus, on the other hand, will topper sign contracts on SCAF's technological studies as complete as possible of one of the most structuring programs for defense Europe? I'm not sure … The negotiations between the two manufacturers were logically difficult. "Yes, he argues firmly and scrubs a bit. We should not expect big manufacturers like Dassault and Airbus to kiss in the mouth after a week", says a source close to the file. Optimism remains, the interest of all be the same, the success of the negotiations. The weekly meetings between Paris and Berlin would be held in a good mood.

"This is a project that is moving forward," General Philippe Lavigne, chief of the Air Force General, said on May 15 during his hearing at the National Assembly. many issues: operational, technological and also sovereignty.

The contract is expected to be signed late this summer, it is estimated to be close to the record, even if everything has been tried before arriving at a signing at the time of the Paris Air Show. In addition to the potential political and media impact that the aviation show could give to this project, SCAF will structure for more than 30 years a large part of the European military aviation industry. This system system should take off in 2040. So there is no doubt about the discussions about the galvauder for a simple ad on the Paris Air Show. This confirms a source close to the negotiations: "We will not sell the negotiations and do anything just because of an ad at the time of the Paris Air Show. These are serious topics that commit us to significant amounts and important periods. To get things right with Germany ".

A Demonstrator on the Horizon 2026

France, which is the nation leading the SCAF program, therefore wishes to launch and freeze all the studies necessary to develop the technologies necessary for the realization of this future air combat system in four of the five components of the program: , remote carriers (drones, missiles …) and connectivity systems. A fifth component is more specifically dedicated to overall system coordination. Paris does not want separate contracts. "If there is notification, it will be all from one block", we are sure of a source close to the file. The contract, which is expected to amount to about EUR 160 million for equal parts between France and Germany, is expected to last for two years. These studies will complement the architecture and concept contract of the SCAF, signed in early February (€ 65 million). In addition, the Ministry of Armies has entrusted Safran with an EAP of EUR 115 million (upstream study program). This allows the engine to finally launch studies on the technological development of a future-generation engine whose temperature will rise to 2,100 degrees (currently 1,850 degrees for the M88 that powers the Rafale).

To refine the technological maturity of the SCAF program, France and Germany want to pass through demonstrators. In particular, the two partner countries are seeking a demonstrator for the combat aircraft by 2026. This will allow validating the technological choices for a sixth-generation aircraft that will fly in 2035. In this context, it is planned in France. a phase of technological development that will last until 2030. This will allow Paris and Berlin to stagger payments dedicated to this monstrous program. "It is normal for the state not to be able to compromise everything immediately because this program represents billions and at the same time because we need to know what studies for two years before moving on to a more important stage", says one in the entourage of the French minister. In total, France should devote a little over € 2 billion to SCAF throughout the military programming law of 2019-2025, according to our information.

Industrial organization, which will do what

What is being developed is therefore the establishment of the organization of the entire industrial and technological base of a program carried out in cooperation between France and Germany, to which Spain has joined. Madrid accepted without hesitation the conditions and organization of the two partner countries. "We quickly converged to common operational needs, first in Franco-German, then with Spain"confirmed the Air Force Chief of Staff. In this context, it is possible from Monday, at the opening of the Paris Air Show, that France, Germany and Spain organize a media event to confirm that Madrid is aboard the SCAF. Spain's defense minister, Margarita Robles, and her German counterpart, Ursula von der Leyen, will be in Paris on Monday.

Regarding the industrial organization, Dassault Aviation and Airbus will take care of the sixth-generation fighter and will collaborate on the demonstrator. The new generation engine will be based on the capabilities of Safran and the German MTU engine manufacturer. As far as remote carriers are concerned, this component will involve Airbus in Germany and the European MBDA missile in France. Finally, in the connected collaborative fight, Airbus and Thales will have to find common ground to cooperate. Finally, the Spanish industrialists logically expect the industrial return.

France, the question of sovereignty

By adopting a policy of assumed cooperation, France is also interested in preserving its sovereign interests in the development of combat aircraft. In other words, "France will always want to maintain the ability to project from A to Z a fightersays a source close to the file. But that is not why we can not exchange and share with a foreign manufacturer (Airbus, editor's note) who also knows how to make combat aircraft ". France wants to remain resilient to political developments in 50 years. "We will not throw away what took decades to build patiently", it is argued. In addition, the strategic defense review recommended keeping track of the design of a combat aircraft.

In flight controls, for example, Airbus and Dassault have nothing to learn from each other, even if their technologies are different. Through their exchanges that will have to be transparent – sine qua non conditions for good cooperation – the two manufacturers may perhaps develop the best flight order of tomorrow. The aim would not be to transfer French know-how to Germany, but to exchange information. As a proportion, France has been able to participate in the implementation of a long-range meteor air missile in the framework of European cooperation and, at the same time, is developing at national level. an MICA NG mid-range air-to-air missile.

The bets operational of SCAF

The objective of SCAF will be the network of the systems that comprise it: airplanes, combat drones, space assets, future cruise missiles and other weapons, command and control, intelligence. The air system of the future will have to be "a system of systems with different network platforms: there will not be an airplane, but a mixed patrol with airplanes, drones – combat or reconnaissance -, hypervelocity missiles and somewhere an AWACS or the successor to AWACS", according to the DGA. A combat aircraft remains dependent on the information at its disposal: it will require the combination of sensors, guns, surveillance equipment, means and communication standards, often long distance, but also aerial refueling support, aerial detection means .. .

Thus, this complete system of systems will work only if it fully shares all the information and if it is capable of creating a true collaborative struggle. Connectivity will become even more essential than before. SCAF opens great perspectives on this point because, "to win the war of opportunities, it will be necessary to rapidly communicate and transfer information and data whose volume will become increasingly important"explained Philippe Lavigne. This system can decide according to the threat or the evolution of the situation that the platform will attack (drone, missile) and the one that is behind. The war of the future will be yet another battle "network facing a network", says one for the DGA. The Air Force is not waiting for SCAF or the year 2040 to start increasing the connectivity of their systems. This is particularly the significance of the Connect @ aero project developed within the Air Force, which takes into account existing systems, whether Syracuse 4 satellite or Omega navigation system, or good Rafale F4 for which brick connectivity is very important.

Finally, SCAF will have to engage with other warplanes in international coalitions, including the F-35. With the Americans, discussions to achieve convergence in connectivity protocols between the SCAF and the F-35 are occurring within NATO. No success so far. "The challenge is there"agreed Philippe Lavigne. "The development of a convergent connectivity protocol is clearly one of SCAF's bets", he said. Because it is necessary to develop an interoperable system in Europe with the other allied aircraft. like this, "This system will be, like the Android mobile operating system, an open system whose protocol can be quickly shared with Americans to communicate and be interoperable immediately"said the Air Force chief of staff. Before finally taking off in 2040, the SCAF will have to avoid missiles and baits from the United States, whose desire is to "lower" this ambitious but fragile European program at any cost. "The NATO solidarity clause is called Article 5, not Article F-35"In March, Armed Forces Minister Florence Parly recalled during her speech at the Atlantic Council, an American think tank.specialized in international relations. A good tackle in the American hyperpower garden …