In recent years, the manipulation of microscopic objects through light has led to the development of new technologies, such as photonic levitation at the nanoscale and optical tweezers. Recently, a team of physicists proposed a new technology that allows the levitation and the photon propulsion of objects of any size, from the scale of a molecule to that of a spacecraft.

Researchers at the California Institute of Technology (Caltech) say they have found a way to levitate and propel objects using only light – although, at the moment, the work remains theoretical. They hope that this technique can be used for "trajectory control of ultralight spaceships and even laser-driven (or solar) sails for space exploration," according to the article published in the review Photonics of Nature.

That means no fuel is needed – just a powerful laser fired at an Earth spacecraft. The researcher at Caltech has developed the "photon levitation and propulsion" system by designing a complex pattern that can be engraved on the surface of the object. 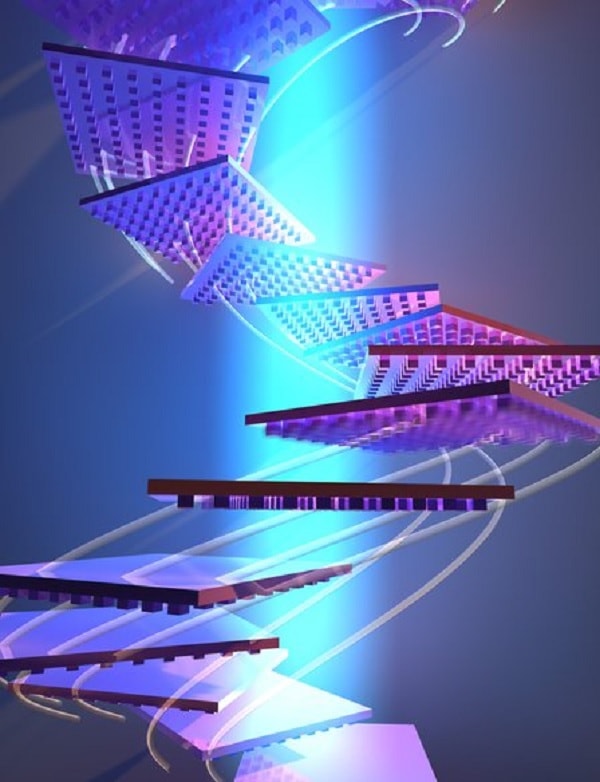 Conceptual illustration of an object with nano-motifs reorienting to stay in a beam of light. Credits: Atwater Laboratory

The manner in which the concentrated light beam is reflected by corrosion causes the autonomous stabilization as it attempts to remain within the focused laser beam. The first advance that laid the foundation for this new research was the development of optical tweezers, scientific instruments using a powerful laser beam to attract or repel microscopic objects.

On the same subject: A new technique of acoustic levitation allows to manipulate several particles simultaneously

In their article, Caltech researchers say that light manipulation could theoretically work with an object of any size, from the micrometer to the size of a spaceship.

Although the theory has not yet been tested experimentally, researchers believe that if it develops enough, it could send a spacecraft to the nearest star outside the solar system in just 20 years.

" There is a boldly interesting application to use this technique as a means of boosting a new generation of spacecraft. We are far from this, but we are testing the principles Harry Atwater, a physicist at Caltech, concludes.