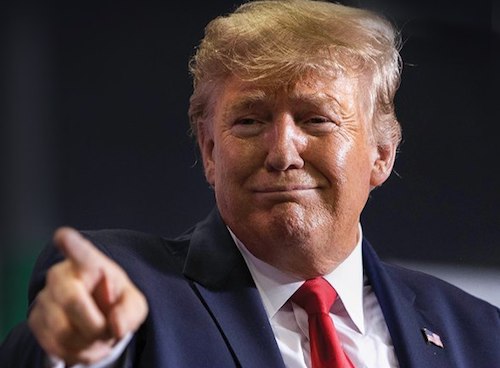 I recently watched the disturbing video showing President Trump’s phone conversation with the Prime Minister of Sudan discussing the Great Renaissance Dam project in Ethiopia. President Trump describes himself as the negotiator between Egypt and Ethiopia on this project, which will become Africa’s largest hydroelectric plant. He claims that Ethiopia has broken the agreement he prescribed and, as a result, his government cut funds for Ethiopia. He described the dam as one that will stop the flow of the Nile. Egypt, he says, cannot live with this consequence and will “blow up” the dam. As President of the United States, Trump’s words will have a strong impact on this project.

President Trump clearly lacks basic knowledge about the dynamics and diplomacy of water flow. Ethiopia, Sudan and Egypt have been connected umbilically since the time of Genesis and will continue to do so. Previous colonial rules denied Ethiopia and its people the right to use the Nile, appropriating the entire part of the Nile for Egypt and Sudan. Ethiopia’s previous efforts to use water for its basic needs were blocked by efforts of Egypt’s international lobby. This denied access to Ethiopia’s capital for its project.

Ethiopia is the source of Abay. Abay, as it is called in its home country Ethiopia, originated in the Highlands of Northern Ethiopia, near the base of Lake Tana. Abay contributes over 80% of the Nile’s water share. Abay has been flowing for centuries, carrying tons of fertile soil from Ethiopia to Sudan, eroding the highlands of Ethiopia. Ethiopia has a population of over 100 million. It is a landlocked place with a severe shortage of energy and electricity. Less than 20% of Ethiopians have access to electricity. Its economy is emerging to transform its potential from an agricultural stage to an agro-industrial one. In order to supply electricity to its people, Ethiopia started the project for the Great Renaissance Dam. The project is supported by all Ethiopians and financed by all Ethiopians. Its technical specifications and its effect downstream were analyzed by specialists, showing that there was no reduction in the flow of water downstream.

Egypt, on the other hand, has an abundance of electricity. Egypt can do better in the use of water resources by applying new technologies and desalination. Egypt should focus its attention on partnering with Ethiopia on forestry projects. This will have the long-term effect of improving rainfall in Ethiopia’s highlands, which will eventually lead to a better flow of water downstream.

Ethiopia, an ancient and God-fearing nation, has never sided with injustice. Ethiopia has never invaded other nations in the past. President Trump needs to become familiar with Ethiopia’s historic position in favor of freedom and justice. The Ethiopians fell in the battle with the Americans in the Korean War. In the fight against terrorism, Ethiopia has been an important ally of the United States and the global peace-loving community, fighting al-Shabaab in Somalia. Any power that tried to undermine Ethiopia and waged aggression and war was defeated. Neither the United States nor its president has the right to prescribe an agreement for Ethiopia. Egypt will not follow this rhetoric and will detonate the dam. Egypt and Sudan will continue their peaceful negotiations under the auspices of the African Union. The union is impartial and African, with solid geopolitical and diplomatic knowledge. I hope Mr. Trump does his research and refines his tone on the subject. True leadership needs solid knowledge and civility.

Mekonnen is an Ethiopian-American doctor who lives in Rockville, Maryland.