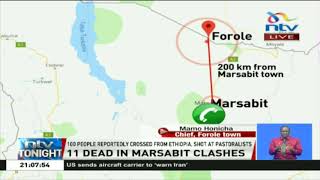 By DAILY NATION
More from this author

Tension is high in northern Kenya after the death of 11 people after a dispute over an irrigation point.

Two people were also injured and four others were missing after Ethiopian insurgents allegedly cheated residents of the village of Ulan in the North Horr district of Marsabit county to attend a peace meeting over a disputed pool of water only to open fire against them.

Talking to NationMaikona's senior chief, Bonaya Racha, said the attack occurred only a few days after the residents of Ulan, about two miles from the village of Forole and a neighboring village in Ethiopia, became involved in a cattle irrigation border.

"As we speak now, we are living in a terrible fear, since 11 people in this area were brutally murdered today by a group of Ethiopian militias," said Bonaya.

The chief, who expressed fear about his own safety, said the attack happened around 11am Monday morning when a section of Ulan elders and boys was invited to a peace meeting that turned out to be the worst tragedy to be witnessed in the area.

Racha said that the tensions followed immediately after the rains ended in the area, when shepherds on both sides began fighting for possession of a pool of water on the Kenyan side.

He said both sides called for a friendly solution to the dispute and on Monday, the Ethiopians invited their Kenyan colleagues to a meeting.

The administrator said that the meeting that was never turned into a nightmare for Kenyan emissaries was arrested and 11 of them were killed while two others were seriously injured.

Four others later disappeared after the robbery, prompting the villagers to launch a search party.

The boss is now blaming the assault on the security apparatus, claiming he had reported to the police three months ago about the tension just to be victimized.

He said he is now vulnerable after his gun was seized.

He also wondered why the police vehicle that was in the area and that could have helped in the rescue mission was taken to the city of Marsabit, about 250 kilometers away, allowing the attackers to escape without effort.

The chief added that plans for the attack began immediately after the mass disarmament of the National Police Reserve in the county by the government in March 2019.

He said weapons should not have been removed from reservists considering vulnerability at border points, but the government was aware that the Ethiopians had not been disarmed.

He also asked Dr. Matiang to open an investigation to determine if the attack was planned by some county politicians.