"The people of Ethiopia should not distrust us even tomorrow," Lemma Megersa 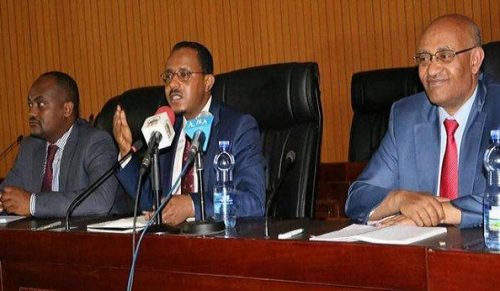 Oromo's regional president and ODP Democratic Party (ODP) vice-president Lemma Megersa was recently criticized for his omission when thousands of Ethiopians were reduced to homeless status because their homes were destroyed with the order of their administration. Sululta and Lagatao, among other areas, and partly due to his video cast during a meeting in the region he leads.

Slogan allegedly spoke about plans to change the ethnic composition of Addis Ababa residents through the mass transfer of the Oromos ethnic group affected by the recent conflicts, which some critics say is a deliberate plan.

In a meeting with businessmen from the regional state of Oromo of Ethiopia on Saturday, Lemma Megersa had the opportunity to explain the allegations, especially in connection with the leaked video.

"I am not a crazy person to think about changing the ethnic makeup of the residents of Addis Ababa," said the Motto emphatically, as seen in a video that became viral, meeting participants.

He thinks that what he said was taken out of context and deliberately misrepresented, and consumed by destructive propaganda against himself and to change leaders.

Recalling the previous meeting, he said he was asked a critical question that his party did nothing for the farmers who are still toiling on the ground and that he responded, he said, that his government is working on the urbanization plan.

The relationship with the Amhara Democratic Party (ADP) was another issue he addressed and he rejected the talks on political differences between his party and the ADP. He emphasized that his alliance was made to rescue the country from disintegration and that its alliance did not come not out of love, but out of interest in resolving the common challenge.

He said he did not defend his beliefs about Ethiopian identity because of his interest in seeking fame and popularity, but because he believes in it and that it is not a matter of choice for all Ethiopians.

There is a mixed reaction to his explanation. A considerable number of Ethiopians are convinced that the Lemma has been wronged and that their views on Ethiopia have not changed. However, there are also Ethiopians who seem to think that it is no longer for words and that he and his friends need to show it through action. Some even point to the fact that his party recently issued a statement pledging to secure Oromo's ethnic ownership in Addis Ababa, Ethiopia's capital.

___
Join the conversation. Enjoy borkena on Facebook and receive updates from Ethiopian News regularly. In addition, you can get news from Ethiopia by following us on Twitter @zorkorkena