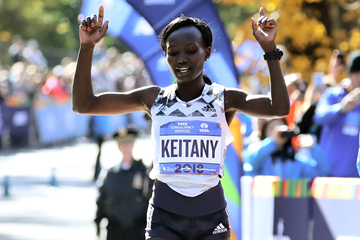 Keitany dismounted the women's field with a breathtaking display away, returning home more than three minutes away from his nearest pursuer at 2:22:48, the second fastest time ever held in New York.

Desisa, meanwhile, clinched his first title here with a powerful finale in Central Park, the Ethiopian beating his compatriot Shura Kitata to win for two seconds at 2:05:59.

But despite much late-race drama in the men's race, it was Keitany who stole the show, at the age of 36 scoring an impressive 1:06:58 for the second half of the race to arrive in splendid isolation.

For the first time, Keitany kept up the pressure on things, nestled in the peloton, while world marathon champion Netsanet Gudeta and Ethiopian Rahma Tusa also hauled out a pack of eight in the half marathon at 1:15:49.

"I did not want to rush in the beginning to suffer in the end," said Keitany, who was weak in the London Marathon earlier this year, having recorded a world record in the beginning. "I wanted to be comfortable so I could be strong in the end."

A 5:08 mile followed by a 5:09 Gudeta cut off the field after half way, with Tusa and Keitany the only two capable to keep pace as they reached 15 miles. It was then that Keitany announced his intentions. She put in a 4:57 miles followed by a 4:55 and a 4:58, the last of which broke her remaining rival, Tusa.

Keitany never stopped applying pressure after that, a 4:56 mile and a 20,000 mile, giving him a 53-second lead over Tusa as they approached the end of the race.

At that moment, Tusa began to feel the full effects of trying to stay with Keitany and in the miles that followed, she was picked up and approved by Vivian Cheruiyot, the Kenyan London Marathon champion, who had measured her effort in a much more balanced .

But with more than three kilometers to go, Keitany had more than two minutes left of Cheruiyot, his advantage only increased when she entered the kilometer that was approaching Central Park.

Inevitably, her divisions began to decline as she neared the end, but given what had happened before, what was truly surprising is that no one – even those who had run more conservatively – was ending faster.

His divisions were simply astounding: Keitany traveled a distance of 15 to 19 kilometers between 25 and 30 kilometers and his segment of 10 kilometers, which took him 35 kilometers, was run at 30:53, a world class time by itself.

Behind Keitany, Cheruiyot had to settle for a second place at 2:26:02 after battling with a variety of injuries, aware that on that particular day she had found an express train in Keitany. "I had a tendon injury and knee and calf injuries, so I was in pain all over," she said. "I have to be happy with the second."

Shalane Flanagan was highly emotional when she reached the final third, last year's champion battling heavily in the last few miles to get on the podium in what appears to be her final marathon, scoring 2:26:22.

"I'm proud to continue fighting despite having some difficult moments," said Flanagan. "I love this community, the active community, and I spent an incredible time competing here."

Tusa paid a heavy price for her exuberance and faded to fifth place at 2:27:13, with Boston Marathon champion Desiree Linden at home at 2:27:51.

The men's race was much more competitive, with the result in doubt until the final climb to the end in Central Park.

With last year's champion Geoffrey Kamworor, with such speed and strength well-known over shorter distances, a trio of Ethiopians joined in the first half looking desperate to take Kenyan weight long before reaching the final.

Kitata, Desisa and Tamirat Tola took turns in the pace, with Kitata doing more in the first half, often running 30 to 40 meters in front of the leader. They reached half in a solid 1:03:55, when the trio had only two Kenyans, Kamworor and Festus Talam, for company.

Talam was the first to take off after 20 miles, with Tola falling after 22 miles. It was then that Kamworor hit the front for his first big move, injecting a speed of 4.2 km that left only him and Desisa in front.

As much as he tried, Kamworor simply could not shake Desisa in the last two miles, and by the time they stepped into the last mile, it soon became clear that Kenya's energy reserve was failing.

Instead, it was Kitata who resuscitated at Desisa and struck the front within the final mile before Desisa responded with an irresistible wave that led him to victory at 2:05:59.

"I am very, very pleased to be the champion," said Desisa. "I finished on the podium before and this time I did a hard workout, but with everything under control. Today is my day. Thank you, New York.

Cathal Dennehy from the IAAF