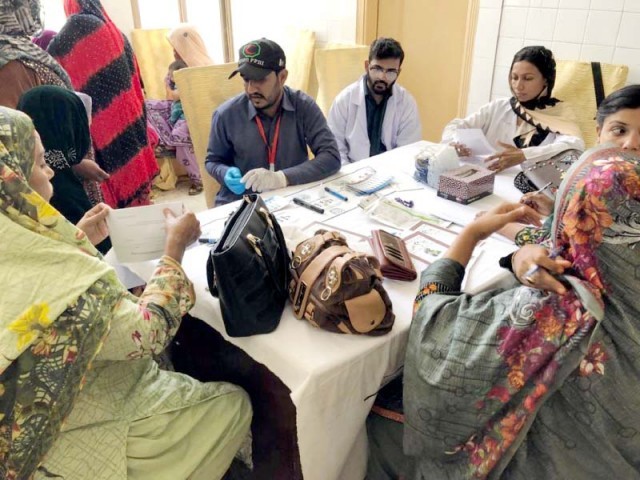 Sex workers, transgenders, drug users to be screened in the first phase

KARACHI: In an attempt to control the rapid spread of HIV in Sindh, officials from Sindh's health department and Sindh's AIDS Control Program have announced conducting a biologic and behavioral survey across the province starting in July.

Sindh was hit hard by an HIV outbreak, whose first reports appeared in Rato Dero, Larkana, in April this year. After that, government agencies took action to control the worsening crisis that mainly affected children. The recent announcement is one of several measures of disease prevention and control taken by the provincial health department since then. The department has set fixed goals for itself regarding HIV control, including completion of the research.

"Sindh govt to seek help from WHO to contain HIV"

The decision to carry out the research was made during a conference organized by the Sindh health department in collaboration with UN volunteers, doctors and other medical organizations on Friday.

Speaking with special reference to biological and behavioral research to contain HIV, Dr Sikandar Memon, Manager of Sindh's AIDS Control Program told The Express Tribune that from July the survey will cover the entire province and will take more than two months to complete it. He said it will be held once every three years.

Dr. Memon said the latest such research was conducted in 2016 and the government plans to collect data from surveillance centers in all provinces before launching the survey in July.

The research will be conducted in two phases, he said.

According to Dr. Memon, HIV-prone people, such as male and female sex workers, transgender people, drug users, particularly those using syringes and pregnant women, will be examined in the first phase. During the second phase, individuals vulnerable to contracting the HIV virus, including bus drivers and trucks traveling for four to five consecutive days, foreigners, prisoners and thalassemia patients who are at risk of receiving unsafe blood will be screened for the disease, he said.

Health budget at 19 percent in Sindh

The results of the survey will reveal details of the communities most affected by the virus, the number of people affected by HIV and the total population of the province where the research will be conducted. The results of the survey will also be computed from the last survey conducted to determine whether the number of people affected by HIV has increased or decreased over time. Dr. Memon, however, clarified that the research team will be responsible only for providing statistics on HIV prevalence. Preparing a strategy to contain the disease and take relevant action will still be the responsibility of the Sindh government, he added.