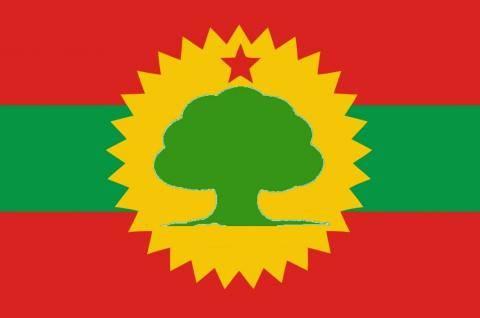 "In 2007, when I met my friend, he had a dream … He was selling custom clothes from his basement.
I went straight into his life and challenged him to pursue that dream beyond this little shop in the basement and start selling his clothes online and doing fashion shows to publicize his clothing line.
In one year, we made fashion shows all over the country, including NY Fashion Week, and became an international brand sold in seven countries. Not only that, but we've also seen reality shows on MTV, VH1 and the Ellen Show. " This is taken from a story I read a few months ago.

In my opinion, the situation of the Oromo Liberation Front (OLF) is very similar to what was happening in this story. The OLF can garner enormous support and examine a significant role in the Ethiopian political arena. However, so far, he has not taken the bold steps that could help achieve that stature. Instead, he now engages in activities that put him in conflict and confrontation with politicians Oromo, the public and Ethiopians in general. This would probably increasingly alienate him from the very people he intends to represent.

From the outset, the OLF fought on the basis of Oromo nationalism and sold the dream of getting rid of the national operation (political alienation including the creation of a separate country), achieving democracy, rule of law, equality, respect for Oromos of Ethiopia … etc. etc. One of its major arguments was the lack of a fair representation of the Oromos in the political hierarchy of Ethiopia compared to the total percentage of Oromos in the total population. This has helped OLF gain significant support from time to time.

Advancing to 2018, the political reality in Ethiopia has changed significantly.

• The dominant minority group within the EPRDF decision, TPLF, is evicted from most of its powers.
• Dr Abiy Ahmed, leader of the Oromo political party (OPDO), became the head of EPRDF and the prime minister of Ethiopia. Obo Lemma Megerssa, (President of Oromiya), is now among the most popular politicians around the country.
• The increase in the number of Oromos occupies key positions within the federal government, including Foreign Affairs, Attorney General. In recent months, the president and the defense minister were from Oromia.
• Several key positions within the security appliance are now controlled by Oromos. The mayor of the capital, Addis Ababa, is an Oromo.
• Dr. Abiy released political prisoners, including OLF supporters and followers.
• Abiy and his government lifted the ban on political parties and the terrorist label in all oppositions. The first political group to benefit from this opening was Oromo-based ODF. Another is the OLF, which was labeled a terrorist by parliament a few years ago.
• Freedom of expression is re-established, and among the first to benefit from this openness is the Oromo Media Network (OMN), which has opened offices in the country, led by activist Jewar Mohamed.
• All political groups exiled oromo (about five) have now returned to Ethiopia and initiated peaceful political activities.
• In fact, in an unprecedented move, one of the leaders of the former rebel group, General Kemal Gelechu, has now been appointed head of security affairs for the regional government of Oromia.
• The state of emergency that was imposed in Oromia and elsewhere is lifted.
• Dr. Abiy began taking unprecedented steps, such as closing a gold mine in Oromia, which appeared to be detrimental to residents' health.
• Dr. Abiy put under control the menacing displacement or Oromos by the Somali regional police etc. The main perpetrator of the crime, the president of the Somali region, is now in prison.

PM Dr Abiy also has a growing popularity in all parts of the country, including in Tigray. Its popularity ranges from the lowest of 75% to more than 90% in some regions. I'm not sure if any other politician has had such popularity in Ethiopia's recent history. This is definitely the envy of any politician.

PM Abiy was a senior government official and an officer of the despised EPRDF army. He gained significant support by moving away from his old political boundaries and by adopting a new vision and political approach. He and his team not only embraced but advocated change. He has openly stated that he is separating himself from the past and tracing a new future for the whole country based on equality, inclusion, reconciliation, building national consensus (as opposed to division) and freedom for all. Such insight and action made Dr. Abiy an embodiment of change with which most Ethiopians dream. Many Ethiopians cast their hopes for a more inclusive and responsive government in the young leadership of Dr. Abiy and Team Lemma.

Dr Abiy and Team Lemma recognized the trauma suffered by the people, but no longer use them to promote hatred and discord. They are now using the history of shared traumas to bring people together and teach them not to seek revenge, but to "do unto others as you would have them do unto you."

OLF now has to compete for popularity among Oromo's approximately 10 political organizations and with popular leaders like Dr Abiy and Obo Lemmma Megerssa. The issues with which the OLF mobilized the public from the outset are addressed or in the process of being answered by Dr. Abiy and his team. OLF now has to look for a political agenda that is more attractive than the rest of its competitors. It can no longer garner support by focusing on history, political alienation, the absence of basic human and democratic rights, the systemic disadvantage of the Oromos in Ethiopia … etc. This simply does not reflect the current political reality in the country.

In this regard, the OLF seems to be going through a process of deciding what agenda to follow and how to manage within the rapidly changing political environment. However, it seems that the chosen agenda, at least for now, is to confront PM Abiy and his team.

In parts of Oromia, the OLF was charged with an alleged attempt to provoke armed confrontations, disrupt transportation services, disregard the government's order to disarm, and so on. He allegedly chose armed clashes with neighboring regions such as Benshangul, causing the displacement of more than 90,000 residents, mostly Oromos.

All this will create instability in Oromia, discouraging investment, tourism and development. It also creates a greater concern with the organization's true agenda. This is not at all in the best interest of the Oromos and the rest of the Ethiopians.

There is no doubt that, in the past, Oromos gave credit to OLF for perusing a struggle against the repressive regimes of Colonel Mengistu and TPLF. Those who participated in the OLF paid a significant sacrifice. There is no denying that the OLF achieved key objectives, in particular when it was part of the coalition with the TPLF after the fall of Mengistu's military government.

But time has changed and, for a different time, the OLF also needs to change its agenda and adapt to the new reality. You have to reorganize and create partnerships in a new way with new actors in the field. If this does not happen fast, the OLF could be seen as increasingly obstructive and an impediment to change.

His alleged confrontational approach today will also put the OLF at a great disadvantage in examining political power. With its current provocative stance, it is very difficult to imagine the OLF finding supportive support from political parties (or the public) elsewhere in the country. Every disruptive action of the OLF takes it away from other political players, except the TPLF. For any political party competing for political power in Ethiopia, the foregoing is a disaster.

Given the current pluralist policy, it is unlikely that a single political party will win enough seats in national (or probably regional) parliaments to form a government. This means that if the OLF does not present a renewed and visionary political agenda, its path to political power both regionally and nationally will become narrower and narrower each day.

Although I do not agree with some of the views or views of the OLF, I still think that as a society we should give OLF (as well as other organized resistances) due credit and respect for their struggle and contribution to change. witness now. I personally greet you for your tenacious struggle. Most OLF leaders have abandoned their personal gains for collective well-being. They paid dearly, both materially and emotionally. All these are enormous sacrifices that we must appreciate and honor.

After so many years, the collective struggle of all Ethiopians began to pay dividends. Politically speaking, Ethiopia is on the brink of a great leap forward. Thus, more than ever, I believe that OLF can play an important role in this transformative political process.

OLF has a lot to offer for all Ethiopians and learn from other Ethiopians as well. OLF is an ethno-specific party (based on Oromo). However, it is part of the history of Ethiopia. Ethiopia needs to go through a process of building national consensus, reconciling and mapping a collective path in a united Ethiopia. This could be enriched by the full participation of organizations such as OLF. The personal and collective experience of each member and leadership of OLF, as far as other organizations are concerned, is also immense. Your experience could help build a solid foundation for our collective well-being and collective destiny. All of Ethiopia could be enriched by OLF's unqualified participation and positive contribution.

OLF should not be afraid to leave the past and embrace the new reality on the ground.

Join the conversation. Enjoy borkena on Facebook and receive updates from Ethiopian News regularly. Also, you can get news from Ethiopia by following us on Twitter @zorkorkena