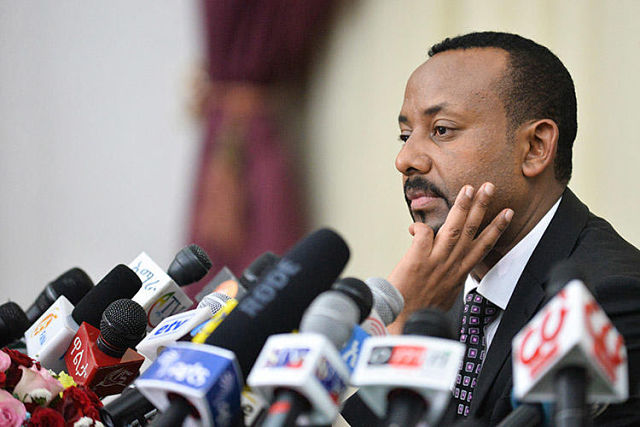 The Committee to Protect Journalists (CPJ) is an independent non-profit organization based in New York City. It promotes freedom of the press and upholds the rights of journalists. CPJ says that "since Abiy's election, conditions for Ethiopian journalists have improved, but some challenges remain." (Photo: Prime Minister Abiy Ahmed speaks during a press conference in Addis Ababa in August 2018 / AFP / Michael Tewelde)

Under Abiy, the Ethiopian media have more freedom, but the challenges remain.

During a trip to Addis Ababa in January, it was impossible to ignore the signs that the Ethiopian media is enjoying unprecedented freedom. A flood of new publications were on the streets. In a public forum that CPJ participated in, journalists talked about positive reforms, but also openly criticized their lack of access to government. At a news conference, state media reporters and the Oromia Media Network, a formerly forbidden and terrorist establishment, sat side by side.

Mesud Gebeyehu, a lawyer who heads the Ethiopian Rights Organizations Consortium, an alliance of human rights groups, told CPJ that he had been on television "many times" last year to talk about human rights, an issue that was once taboo for human rights. media.

Ethiopia, which was one of the world's most censored countries and one of the worst jailers of journalists in sub-Saharan Africa, underwent dramatic reforms under the leadership of Prime Minister Abiy Ahmed, who took power last April. In 2018 – for the first time in 14 years – CPJ did not register any journalists behind them in their annual census. And the country closed its block of more than 260 websites and banned the media forced to work in exile.

"I was fighting for [press freedom]But I did not expect that to happen in such a short time, "said Abel Wabella, a journalist who was arrested and charged with terrorism under the previous administration.

In May, Ethiopia will host Unesco's World Press Freedom Day: a reflection, according to UNESCO, on the country's commitment to democratic and media reform.

Although the Ethiopian press is now much freer than before Abiy took power, CPJ spoke to more than a dozen journalists and rights advocates who said the challenges remain, including the risk of attack and arrest, especially in regions restless; attract advertisers in a market where businesses are afraid of being seen to support critical publications; accusations of sowing divisiveness; and a proposed law that could restrict their newly discovered freedoms.

CPJ also tried to reach out to the government to comment on press conditions. Prime Minister Billene Seyoum's press secretary has acknowledged receipt, but did not respond to CPJ's email questions on April 24.

Perhaps most fundamentally, the journalists told CPJ that they are anxious for the freedoms they enjoy to be rooted in the law, instead of being guaranteed only by the goodwill of the Abiy government.

The reforms "are neither legally nor institutionally guaranteed until now. They are so because the leaders at the top are willing, but neither their will nor their power is permanent, "CPJ Befekadu Hailu, a journalist and social activist who edited the weekly Addis Maleda, told CPJ.

A board set up by the attorney general's office is reviewing a number of laws, including those previously used to restrict the press, such as the anti-terror proclamation and mass media law, according to media reports.

Most of the journalists with whom CPJ spoke said she was pleased with the reform process, which included public consultations. Befekadu said he believed those involved were "independent". Jawar Mohammed, executive director of the Oromia Media Network, said those involved could move faster and communicate more frequently and clearly with the public.

However, a proposed law on hate speech is dividing opinion.

Last year, the government said it would draft the law in response to concerns about toxic online rhetoric that some say is an incitement to violence or has the potential to exacerbate divisions, largely along ethnic lines, according to reports. The government has already responded to the strain by cutting off Internet access. CPJ documented two of these shutdowns in the Abiy government during the unrest in Addis Ababa in September and in Somalia during a crisis in August.

Yared Hailemariam, executive director of the Ethiopian Human Rights Association, based in Switzerland, told CPJ that the media were accused of "aggravating" the tension. "It is a reflection of the political situation in the country, the tension is high," he said.

Most of those who spoke to CPJ said they felt the need for the Ethiopian media to become "professionalism" and to act "ethically" and "responsible" within the newly opened space. But even so, some, like Befekadu, said they feared that the hate speech law could have an "inhibiting effect on freedom of expression."

"They want to give the government more power to regulate the speech. Given the divisiveness in the country, it is understandable. But we need to be careful … we should not allow the government to enact legislation that gives them grounds to overturn content they do not like, "said Endalk Chala, an assistant professor at Hamline University in Minnesota who studied Ethiopian media.

A copy of the bill, reviewed by CPJ, includes criminal penalties for hate speech and publication of "fake news." Addis Fortune, privately-owned, warned in an April 13 article that the bill would not be a "golden bullet to contain hate." speaks "and raised concerns that this refers to laws that Ethiopia previously used to suppress critical discourse.

Eskinder Nega, who launched the weekly Ethiopis last year, months after being released from nearly seven years in prison, said ideas should be able to flourish, hatred would be "leaked." Jawar said it was "dangerous" to invite government regulation of speech, instead suggesting a regulatory mechanism for the media.

Jawar and Eskinder are among the prominent media personalities whose work has been criticized for inflaming tensions, according to media reports.

Both strongly refuted these visions. Jawar said that a strong political and advocacy position was being confused with divisive discourse. Eskinder said that despite having strong opinions, he never defended the violence. In an e-mail exchange on April 26, Eskinder told CPJ that the division allegations were part of a "fabricated debate" based on a misinterpretation of his work.

For the new documents that have multiplied in Addis Ababa, financial concerns are urgent.

Abel can attest to this – he established the weekly Addis Zeybe in October, only for the newspaper to leave the list after four editions, after financial pressures and distribution challenges.

Abel told CPJ that the publications have difficulty attracting advertisers, whom he said may be shy of being associated with critical publications. This was a sentiment echoed by Jawar, who recently created a magazine, Gulale Post.

"Businesses are cautious. This is a popular government, so they do not want to be seen as anti-government, "Eskinder said.

The government has also not been very open to the media, with Abiy hosting only a couple of press conferences with local journalists since coming to power, according to media reports and two of the journalists with whom CPJ spoke.

Journalists in Ethiopia still face the risk of attack. CPJ documented how the mobs attacked a team from the Dire Dawa media agency in Meiso in the Oromia region in July in an incident that killed its driver and how two journalists from Mereja TV were arrested for a brief period. by police in Legetafo, in the same region, and beaten by a crowd after her release in March. The regional government made early promises to investigate, but Mereja TV's chief executive Elias Kifle told CPJ in April that authorities had not investigated the crime.

Oromia's government spokesman, Admasu Damtew, did not respond to CPJ phone calls or text messages on April 24 and 27.

"They [have fulfilled] their obligation to respect human rights, but the Abiy administration also has to protect people, protect journalists, protect human rights organizations from being attacked, "CPJ Yared of the Association for Human Rights in Ethiopia told CPJ.

The Economist reported last month that reform under Abiy "is not the first flowering of free media", pointing out how liberalization in the 1990s was followed by repression in the 2000s. When CPJ asked Befekadu whether he thought the current era of freedom would last, he said: "I can not say yes or no. But there is an equal chance that the change will regress as it progresses. It takes a collective effort by the media, civil society and government to prevent it from falling into the vicious cycle. "