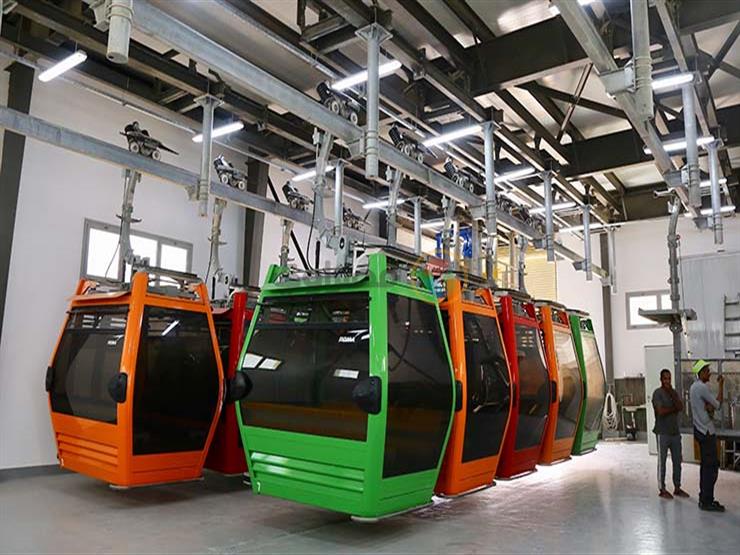 The city of Jalala, a giant national project, is growing on the Al Ain Sukhna plateau, the "Majesty Plateau," as part of a series of national projects implemented by the state to cross Egypt into a comprehensive development.

The city includes a number of major projects, the most important being the Grand Hyatt Resort, which is a qualitative leap in the level of tourism services in this region.

Masrawy, wandering within Majesty's project, and monitoring the cable cars.
Among the largest in the Middle East, the cable car is 4 kilometers long and 375 meters long, is the third of the type in Egypt and is operated by the French company Boumé, under the supervision of the Armed Forces Engineering Corps.

"The cable car is not only a means of entertainment, but it is possible to use it in mountainous places that are paved with paved roads, like the majesty of majesty."

Lamasraoui added that the two stations, one at the top of the mountain and one under the mountain, are equipped with nine vehicles, ready for operation at any time, and include 23 columns with cable, the distance between the stations of 4 and 375 meters.

"Each cabin can have 10 or 750 pounds, a flight between the two stations takes about 15 minutes and the speed of the cable car is 5 meters per second," he said.

The operation and maintenance supervisor, which booths with a glass floor to enjoy the presence of images and videos and equipped with a solar cell, to provide the vehicle with electric power to operate radios and open and close the door upon entering the station .

He stressed that the installation of the cable car columns is a good geometric design in the ground, taking into account the tendency of some columns so that the vehicles can move without obstacles, as well as to control the distance between the cabins and some of them in the line of operation and do not collide with two vehicles. Zero

"The cable car can run at night, but under certain conditions, and we have wind speed measurement devices and, if any danger is detected, operations are stopped immediately."