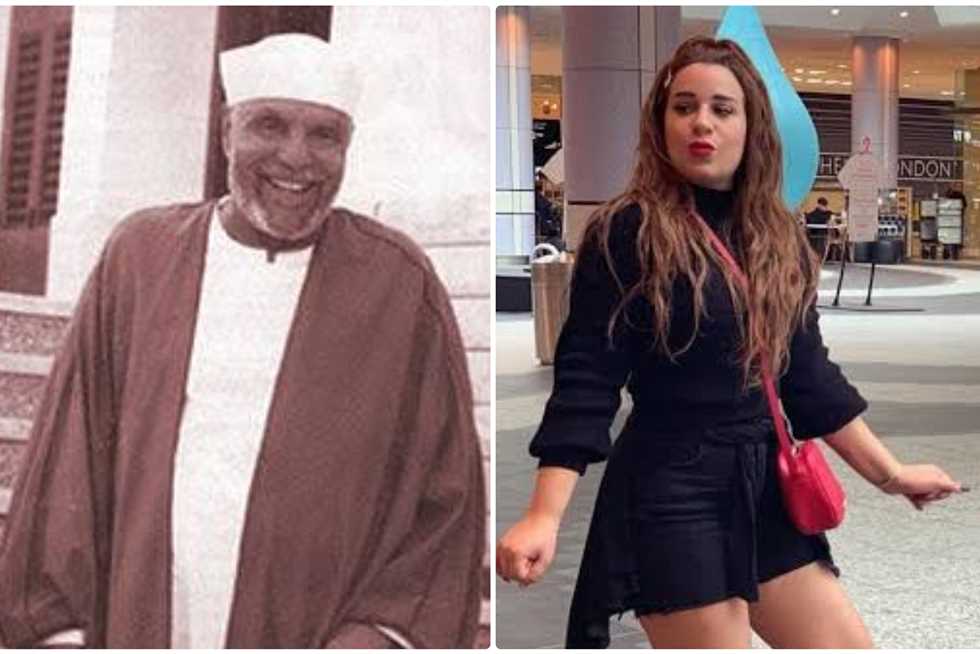 A state of outrage has sunk users of social networking sites in Egypt in recent hours, caused by Egyptian media Asma Sharif Mounir after his attack on the late Sheikh Mohamed Metwalli Shaarawy, describing him as "extremist."

This description led many users of these sites to launch an attack on them, asking her to apologize for what she said and closed her account on the «Facebook» site.

The beginning of the crisis

The crisis began when Asthma asked her Facebook followers to name a number of sheiks who trust their fatwas and opinions on world and religious issues, because most preachers they know have lost confidence as a recipe, citing their reasons. for this because they have a strict track record. Your fatwa and information is mostly false. 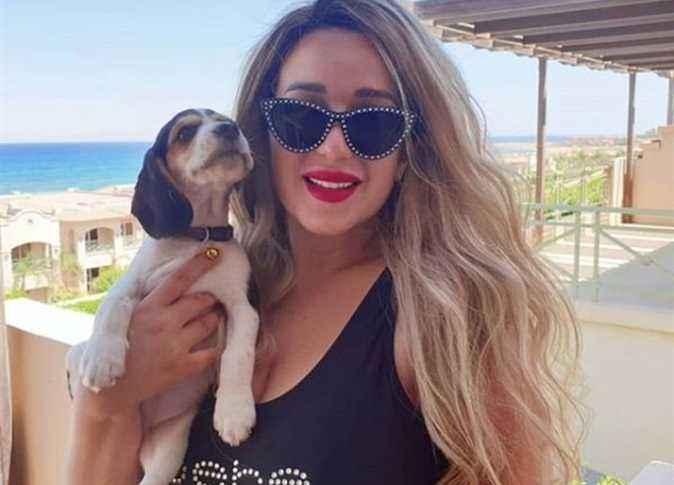 Some of her followers have suggested the name of Sheikh Mohamed Metwalli al-Shaarawi as the preacher magnet and a symbol of moderation, but rejected the idea that the supplicant magnet's fatwas have many extremist views, as she said, saying: «Long live I heard Zaman with my grandfather, God have mercy on him. You know, when I grew up Cam video Mosaddk, myself, of the cutter of extremism, the words really didn't know absorbed, really amazed, Hdor you in the Khalletny videos invalidated Ashovo ».

Sharif Mounir's son described the preacher's imam as "extremist", infuriating social media users who were unhappy with the abuse, which led them to call it a flood of attacks. "Asthma" could not face him except by apologizing for what happened to her. Shaarawy ». 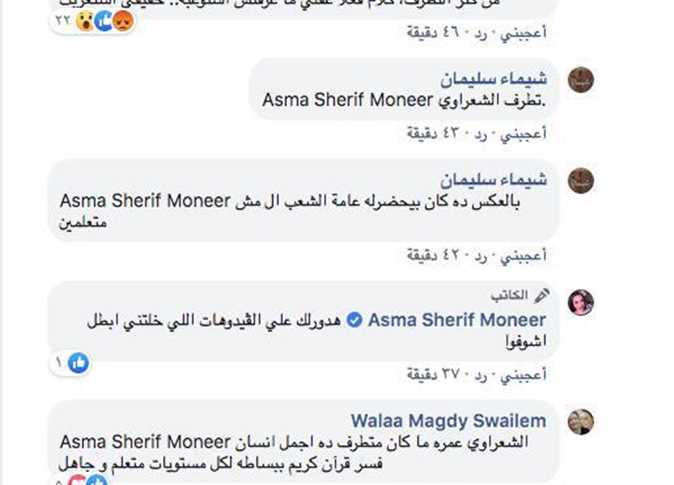 Asma said through her official Facebook page in an attempt to calm her anger: “There was a dialogue between me and someone who misunderstood the expression of what I mean and feel; I understand my words that I have criticized the virtue of Sheikh Metwally Shaarawy, I speak without which, according to my words I do not in any way mean that I misunderstand or misinterpret my words, I do not value the values ​​of the virtue of the magnet I'm usually my age and I love mistakes.

She continued the introduction of the "Me and My Daughter" program, which airs on one of the satellite channels: "I didn't apologize because I couldn't improve the expression and choose the right words, and that may be because you are still learning to learn about lack of awareness, I'm not talking to my nature like the first day I decided to show Social Media, but now I need to get Bali out of every word saying that every Bthasb need is higher and a new high, and every subject that I it was the role of a religious reference and religious lessons to understand in a simplified way. 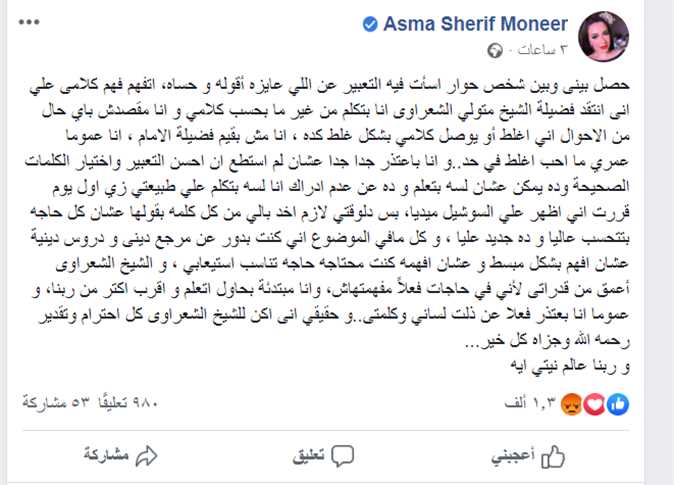 She added «Asthma»: «Ashan, I understand that you need proper accommodation, and Sheikh Shaarawi deeper than my abilities, because I really need to be understandable, and I start trying to learn more and closer than our Lord , and I generally apologize for the humiliation of my tongue and my word. Respect and appreciate God's mercy and reward him all the best … and the Lord of the world of my intention is eh ».

Asthma's apology for Sheikh Shaarawy's abuse did not end the crisis, where angry people continued to attack them, deciding within minutes of closing their Facebook account.

Artist Sherif Mounir intervened in the crisis line to try to calm the anger of users of social networking sites, after the crisis has become the most popular topic in Egypt in recent hours, where «Mounir» his son cheated on words during his conversation Sheikh Shaarawi for lack of Arabic. He put.

In turn, dear Islamic preacher Ali al-Jifri commented on the current crisis through a posting on his official Facebook account in which he said repeated criticism of Imam Muhammad Metwalli al-Sharawi and Imam al-Bukhari, and exaggerating blasphemy and blasphemy are folly. , And bad literature, or perform a psychological movement, according to the description. 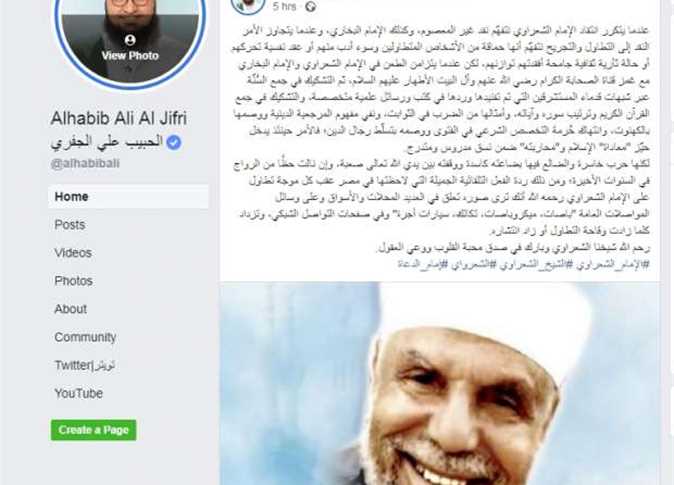 He added «Jafri»: «When the challenge coincides with Imam Shaarawi and Imam Bukhari with the blinking channel of the Prophet's companions, may Allah be pleased with them and the house of the pure and clean, peace be upon them and then question the collection of Sunnis through suspicions of the ancient Orientalists, who were refuted and contained in specialized books and scientific messages, and questioning the specialized books. The Quran and the order of the Sura and its verses, and similar to beating in the constants, denied the concept of religious reference and described the priesthood, and the violation of the sanctity of legitimate specialization in fatwa and the stigma of clergy domination; then it enters the field of anti-Islam and fights it within a deliberate and gradual pattern.

He concluded "Jefri" published on "Facebook", saying: "It is a lost war and wrapped in its possessions as a pillow and has fallen into the hands of God Almighty difficult, although it has been lucky in popularity in recent years; including the beautifully observed spontaneous reaction in Egypt after each wave Imam al-Sha & rawi (may Allah have mercy on him) said you see his photos attached to many shops and markets, public transport, minibuses, tiktaks, taxis and on the network pages.