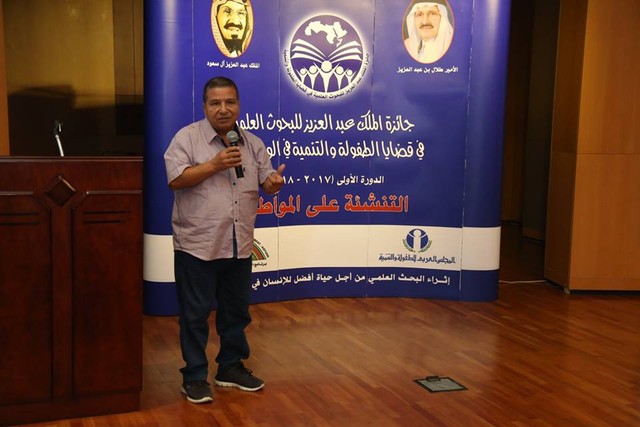 Dr Hassan Al-Baylawi, Secretary-General of the Council, said the award aims to deepen the culture of children's rights by enriching scientific research in childhood, supporting researchers concerned with children in Arab countries and motivating creators and researchers in the production in the field of childhood. And maximize community dialogue on issues important to children and their creation through research.

He stressed that the Council's choice of the theme of the first session of the "Misleading Blindness" award came in partnership with the Arab Gulf Development Program (AGFUND), based on the Council's interest in children, education and citizenship issues as priority themes for the education of children in Arab countries and the accumulated experience of the Council in this field. The Council has developed a new model for the education of the Arab child, "Raising Hope," based on a human rights approach aimed at developing hope by raising the awareness of children, building their energies and building their capacities based on the principles of democracy, freedom and social justice. Positive citizenship for the establishment of a knowledge society.

Al-Baylawi pointed out that a ceremony will be held under the patronage of Prince Abdulaziz bin Talal bin Abdulaziz, chairman of the Council, during which the prizes will be awarded to the winners as the research was closed on 30 August 2018.

It is worth mentioning that the award was launched by the late Prince Talal bin Abdulaziz, founder of the Council in September 2017.