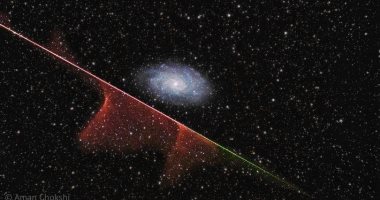 Aman Chukchi of NASA captured an incredible image of a meteorite that crosses a distant galaxy that captured NASA's astronomical image today.

According to the British newspaper Mirror on its official website, the galaxy (M33), about 3 million light years from Earth, appears in the photo, while the meteor appears to be passing by.

"The galaxy was not in danger because it was much larger than the size of the small rocks in the meteorite," NASA said. "There is another reason why the galaxy is far away.

"The astronomer was so lucky to have a meteor and a galaxy in one, and in the end the meteor was in a second, but the galaxy will continue for billions of years," NASA said in a statement.