Vít Klusák (On the net): We thought we had reached the bottom of hell. But then it was even worse 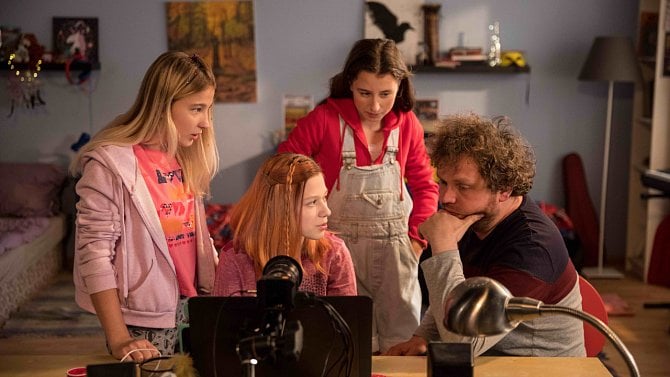 For more than three days, there is a documentary on the net to raise money for its creation in a crowdfunding campaign. At present, more than 2.7 million Czech crowns are pledged by taxpayers. Creators also want to use the money for a follow-up awareness campaign.

The resource documentary maps child abuse on the Internet. The authors created false profiles of 12-year-old girls and filmed with the extras (three adult actresses with a youthful appearance) the men's attempts to contact them and lure them, for example, naked photos, but also threaten them or blackmail them.

Behind the project is Hypermarket Film, which they founded. Filip Remunda one Vít Klusák. He has the films Dream Czech, Matrix AB, The Boulevard Workers and more. We talked to Vít Klusák about the course of the crowdfunding campaign and the reasons that led him to do the documentary.

In an interview with DVTV, you said that the amount you chose on Hithit is above the limit, but still hardly covers the cost. Does it still apply?

In fact, just over 2 million were left out of the budget when the Cinematography Fund contributed less than we asked, and it also did not deal with a large corporation. But it was unthinkable for us to reach such an exorbitant amount when other documents try to collect about 500,000. So now we have settled the debt and there are about 700,000 CZK left over for the campaign. You have to take into account the contributions to the portal, the VAT and the purchase of rewards, including posting.

What social networks / channels did you work with? In the original trailer in Hithit you mention only the server Lidé.cz.

The key was Facebook and its affiliate Messenger. The girlfriends also had Snapchat, Xchat.cz, Skype, we also tested Omegle. The escapes of a man took us to the portal Amateri.cz. He founded one of our actresses, where she offered her as a pimp. But the Lide.cz server is also an extremely nutritious "nook". We were fascinated by the room "Abnormal chat 12 – 20". Or a place where 12 year olds with much older people can talk. What is it about. No longer in this form.

What surprised you the most when collecting material?

Something more frightening happened every time we had the impression that we had already reached the imaginary background of hell.

What was the worst situation you encountered during filming?

It was a time when Bára, the makeup artist, recognized one of the predators. He is a man who is the head of the children's camps.

Hundreds of hours of sensitive and compromising material were created during the filming, did you also deliver some to the Czech police?

Yes, the Police of the Czech Republic invited our production to send the recorded material to them. We did this and learned that they were initiating criminal proceedings.

What are the other ambitions of the document when we ignore education between parents and children?

One of our ambitions is to extend the curriculum to the fundamentals of safe behavior on the Internet. We believe that children should know this knowledge before becoming interested in social networks, which is, according to research, around nine years of age.

From the presentation of the project, it seems that the problem only concerns girls, do you think boys (men or women) are equally at risk? Have you tried working with them too?

We also had fake accounts of guys, but we soon realized that it would not work. Our concept is based on the fact that an adult actress is stylized in the role of a 12-year-old girl. It is almost impossible to find a young man who is over eighteen years old and yet has no beard, no mutation, and is capable of capturing the believable pre-pubescent boy. We decided to make the best version of the version where we focus on underage girls. But the problem obviously is not just about girls, which we are trying to emphasize in interviews.

What strategies do the predators you use the most in shooting?

Do you think most predators have collected material for their own use, or can it be a difficult business (negotiating with purchased material)?

In the movie we also recorded a story about business.

Do you think these people are sick or just amoral and cynical?

Experts say that only 3 to 5% of people who hunt children on the Internet suffer from sexual aberration. All others are called psycho-sexually normal. Men are above all selfish selfish. They do not even realize how deep a groove they can leave in the souls of their children in the next few years.

In your opinion, is this the current phenomenon, or has it been here for a long time?

It often happens to me that similar stories tell women about 25 years of age. The phenomenon has been here for at least 10-12 years, but it has not been talked about much.

Collecting material has been largely on the Internet, are you planning a larger Internet campaign, or an Internet monitoring project?

We are planning an awareness campaign that will follow the film directly. That's why we remember our collection in Hithit until the end, the collection will be closed in 3 days. The face of the campaign will be just our three actresses combined with youtubers as being extremely popular with children Jirka Král.