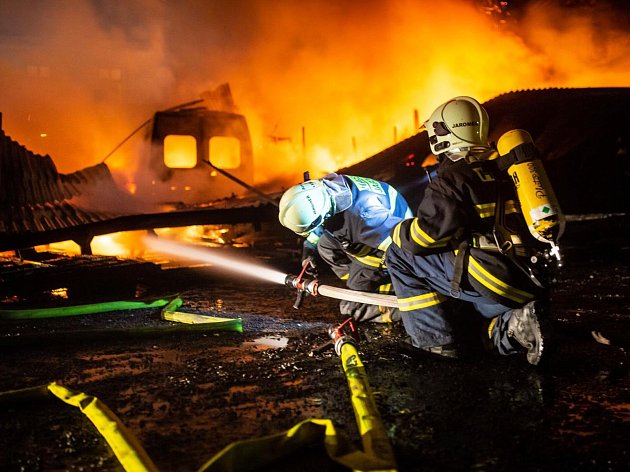 Jaroměř / FOTO / – Fire in a warehouse about 30×15 meters late Monday night was set on fire by firefighters in and around Jaroměř.

At 6:13 p.m., the Regional Fire and Rescue Information Center received a report on the fire in Josefov. Firefighters from Jaroměř, Náchod and Hradec Králové central station and SDH Jaroměř, Černožice and Velichovky units intervened at the scene of the fire.

Beside the fire, the stacked storage room was open, and the flames did not threaten anything in the neighborhood. "The warehouse was already on fire when the units arrived, and it was not clear what the materials were inside, which is why the units made a fire intervention outside, the fire was extinguished with several streams of water, it was also "said Martina Götzová, a spokeswoman for HZS Hradec Králové, adding that firefighters had to work all the time on respiratory technology." The heat was so great that the structure collapsed inside the building. " "Therefore, a gas container from the central station in Hradec Králové with a sufficient supply of pressure cylinders was also sent," she added.

Flames were fired by the fire brigade shortly before 7 pm when the commander announced the scene of the fire. Some of the material was under the supervision of a local fire brigade. "This morning the fire brigade was replaced and still coughing in the fireplace," added Martina Götzová.

A fire brigade investigator also appeared on the scene. The damages caused by the fire were provisionally estimated at 1.2 million kroner.

"This figure includes not only the value of the structure itself, but also the damage to the building material and other equipment, including the cause of the fire, are subject to further investigations," said the spokesman, with the fact that investigators when the fire is cold. "No possible cause has yet been ruled out."