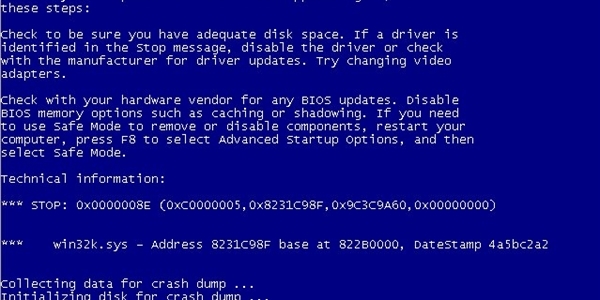 It's been 21 years since Microsoft tried unsuccessfully to show the beta of the upcoming Windows 98 at the COMDEX technology conference.

Bill Gates, along with assistant Chris Capossel, had a computer with the above mentioned system on stage and was about to demonstrate a revolutionary breakthrough. It was about connecting an external device without having to restart the computer. The scanner should be a demonstration.

Then Chris Capossela connected it to the computer and explained to the audience how Windows 98 would respond to it. First, a new device connection warning appeared, followed by automatic driver installation. During that time, however, an error occurred and the computer displayed a "blue screen of death" before hundreds of journalists and business partners.

The internet does not forget

Blue Screen of Death is a blue screen of death (BSOD) that indicates a serious Windows error message overlapping the entire screen. The name was given to the screen by the blue background. Users may still encounter driver problems today. However, this may indicate a hardware or other software error.

Instead of amazement, the audience was so excited with laughter. Bill Gates just commented, "This should be the reason why Windows 98 is not yet being sold."

Users are particularly aware of the "blue screen of death" by not being able to simply ignore it. It means an irreversible error, so you should reboot and reload the entire system. It has been around since Windows 2.0 and has been the same. However, in the latest Windows 10, it is already in a graphical environment and is complemented by a big sad smiley ":(" and a QR code through which you can retrieve information about the error on your cell phone.

The advantage of a monitor rotated in pivot mode – when you fall into Windows, you do not have to tilt your head to a smiling face! pic.twitter.com/rTWIvAzEnI

Finally, COMDEX was held every November in Las Vegas, USA. However, at the beginning of the 21st century, it gradually lost interest in the public and the media and was abolished in 2004. The world's attention shifted to the Consumer Electronics Show in January in the same city.