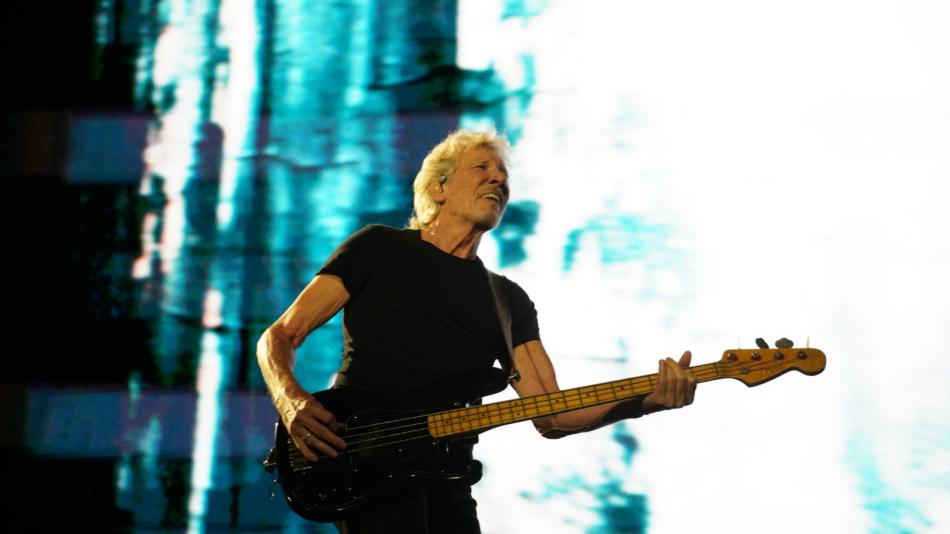 The dark side of the Campin stadium lit up at 8:28 p.m., revealing little by little all the details of Roger Waters' sumptuous meeting with Colombia. The euphoria turned into a scream of excitement was amplified as the lights shot their eyes to the stage and the impressive 72-meter-long screen showed the first images on its surface.

A gigantic beach appeared on the screen. It was a reddish image of the sea that was observed by a person who served as a structure for the first sounds of the recital. "I've been crazy for many goddamn years … I've always been crazy, like most of you," was the voice that broke the silence and began hysteria.

The appointment with Waters, one of the most important singers and composers of the rock universe and who built part of Pink Floyd's history appeared on the scene giving the first chords with his inseparable bass of Breathe.

The cadence of guitars and the message revolving around the meaning of life electrified fans who sang excitedly trying to save their strength for the next emotional success: One of those days, with the unmistakable bass of a Waters connected with their fans

Thunder broke the applause and multicolored lights fell like a waterfall bouncing off the gigantic stage. Then the sound of a ticking tick made it clear that it was Time of Time. Thousands of watches appeared behind the musicians, while many closed their eyes to surrender to the trance of one of the classics from the album The Dark Side of the Moon.

When the emotional frequency was at its peak, showgirls Jess Wolfe and Holly Laessig gave the audience a powerful talent show with their rendition of Breathe (Reprise) and Great Gig in the Sky, leaving everyone open in El Campín.

Roger reappeared with Welcome to the Machine, from Floyd's album Wish You Were Here, as an allegation against the shallowness of a music industry that does not take risks.

The musical journey then took the course Is Is the Life We Really Want ?, the most recent album of the British musician (2017), with the music Déjà Vu (critic of the inconsistencies of today's society), an aspect that he later developed in The Last Refugee and Image That, another strong social and political criticism in which in one of his sentences he shouts, "Take a picture with a leader without a brain" (…) "Continue filming the show on your mobile from a place in the front row … Continue to register the Miss Universe catching lightning, "was part of the hard message the artist launched.

To balance the emotions, the show continued with Wish you were Here, the emotional ballad that moved the more than 30,000 attendees to the show. It was not for less, being one of the hymns with which Waters and Pink Floyd pay homage to Syd Barrett, founder of the mythical group.

The deafening noise of a helicopter flooded the stadium at any moment to make way for The Funniest Days of Our Lives, along with Another Brick on the Wall (part 2 and part 3), which triggered the hysteria to the clouds, which calmed down after a second session and in which the band was accompanied by a group of twelve children from the Crea Foundation, who sang the chorus of one of Pink Floyd's most popular compositions

After a break, the show pulsed again with the acoustic melody of Dogs and then mutated to the hypnotic rhythm of "Pigs (Three Different Ones), which again spread a diatribe against the powerful." … And when you put your hand in your heart, you're almost a joke, you're a clown " sang Waters accompanied again with pictures of the president of the United States and a famous pig floating above the heads of the public, with a shocking closure in which everyone read: "Trump is a pig".

The singer put on a mask of the music animal and gave an ecstatic audience with a platform transformed into an industry of four smokestacks. Earlier he had picked up a sign that said "pigs dominate the world" and then gave way to another in which he said the phrase "fuck pigs".

Waters also took a moment to talk to fans who met him at the stadium. He invited them to believe in human rights, to apply them and, in his view, showed their support for the protests of Colombian students who protested for a better education.

Following with some criticism, his musicians revealed the chords of Money. Once again the stadium vibrated with applause and screams, which were not interrupted after the avalanche of hymns that followed in the show with Us and They; Brain Damage and Eclipse, before ending with a deeply felt Comfortably Numb to bid farewell to a concert full of musical emotion and powerful reflection on a world for which Waters always gave a connotation of chaotic, painful and unfair, with lyrics considered mature hymns, but of surprising relevance in the present.

Resisting (resisting) was the message that the Colombian children who accompanied the artist wore on their shirts and it was the word that hammered several times in the mind of a crowd that had with this concert, the experience of a catharsis of a gloomy panorama, but that, in this case, could be conjured up with music and reflection.